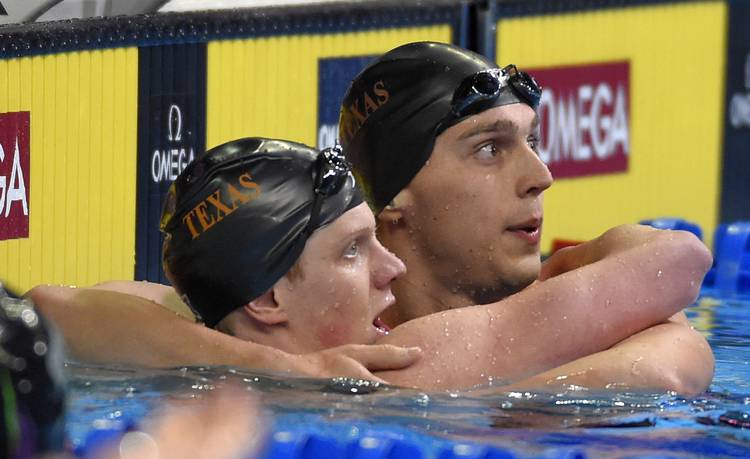 INDIANAPOLIS — Clark Smith had been waiting a whole year to race the 500-yard freestyle race at this season’s NCAA swimming and diving championships.

After winning the event as a sophomore in 2015, Smith faltered at last year’s meet and failed to make the finals in the 500. In Smith’s absence, teammate Townley Haas won it.

“I was pissed off,” Smith said Thursday night. “That was awful. Watching on deck and seeing Townley win it was awesome, but to not be there when I was there the year before, that was painful.”

Smith, now a senior, made the most of his opportunity to swim the 500-yard freestyle on Thursday. He broke the 11-year-old American record in the event, touching the wall in 4 minutes, 8.42 seconds. Haas finished a half-second behind to nab second, making Smith’s win even sweeter for Texas fans.

Smith remembers when Peter Vanderkaay set the American record in 2006. He said his 500 time was around 5:00 and remembers being struck by how fast Vanderkaay’s time was.

“To be here now, it’s kind of surreal,” Smith said.

The race also had implications on the team standings, as the Longhorns picked up 37 points with their 1-2 finish in the 500. The team sits in first place with 225.5 points, and California is a distant second with 143 points.

Smith and Haas both qualified for the 2016 Olympics, and they earned gold medals in the 800-meter freestyle relay in Rio. Smith swam in the preliminary heats, and Haas competed in finals.

“We have a really great training group,” Smith said. “Townley is awesome to have in workout, and I’m really fortunate to swim with a team that’s so competitive in work out.”

Junior Joseph Schooling watched Smith and Haas race in the 500 from the warm-down pool. He said he was happy for both of his teammates, especially after seeing Smith’s rough meet in 2016.

“I’m very proud of both of them, especially with the criticism Clark has had to go through, especially last year being the overwhelming favorite,” Schooling said. “I think Clark takes that to heart sometimes, even though he doesn’t show it. For him to come back, put that all aside, and come back out and go 4:08 and break the American record — be the fastest in history — I’m very proud.”

Before walking off the podium after the award ceremony, Haas patted Smith on the shoulder. The two teammates smiled together and posed for a picture. The record had fallen, and Smith was once again victorious.

The Longhorns won both relays contested on Thursday. Brett Ringgold, Jack Conger, Tate Jackson and Joseph Schooling teamed up to take first place in the 200-yard medley relay, posting a time of 1:14.59.

In the 400-yard medley relay, John Shebat, Will Licon, Schooling and Conger smashed the NCAA record by over a second, touching the wall in 2:59.22.

Friday’s preliminary races at the NCAAs begin at 9 a.m.

Texas target B.J. Foster made an early impression on his head coach