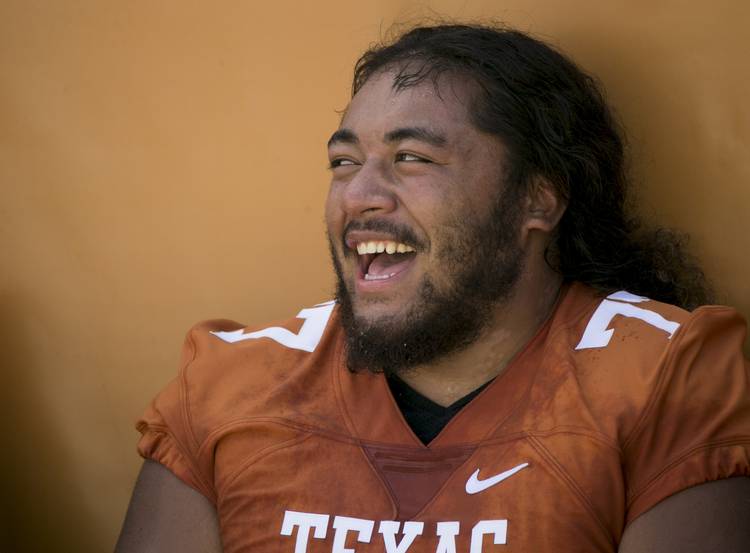 Nobody ever said anything publicly about it, but it was obvious Texas guard Patrick Vahe landed in the doghouse last season.

From hulking to sulking, the 325-pound sophomore started the first seven games and then mysteriously got benched against Baylor, Texas Tech and West Virginia.

There were whispers that Vahe got crossways with then-offensive line coach Matt Mattox. Never one to hold anything back, Vahe will gladly give his opinions. That’s what makes the gregarious blocker one of the most engaging personalities in the entire Texas athletic department.

On Thursday, Vahe was made available to reporters for the first time since last October. While he didn’t go into full detail about what happened, it’s clear the 6-foot-4 Vahe wants his starting job back at left guard alongside All-American tackle Connor Williams.

“My mind’s been on the wrong path,” Vahe said after UT’s fourth spring practice. “My effort really wasn’t there. It really wasn’t what was needed for the team at that moment. But I’m on a different road right now.”

Did the coaching change give Vahe a fresh start?

“As of right now, any coach that comes through, I respect them a lot,” he said. “Whatever they have to bring to the plate, I’ll be sure to step up to it.”

Was the old coaching staff the problem?

“I don’t blame the coaching staff,” Vahe said. “It was just a personal problem of mine. It was my decision to get back to where I needed to be. The coaches were there to help me out, and I took advantage of that.”

“Just realize why I’m here, the reason why I play at Texas,” Vahe said. “I love playing this football game. Any coach that comes through here to help me out, I take advantage of that.

“Why am I here? I do it because of my pride, my family. I’ve always wanted to come here since I was a little boy. Seeing them win these national championships, I wanted to be a part of that. Or at least get my degree from one of the best schools in the world.”

Vahe started the first 10 games of the 2014 season before missing the final two due to injury. He was an honorable-mention pick by the Big 12 coaches and was penciled in as a possible four-year starter for the Longhorns.

But last season changed the dynamic. Jake McMillon started for Vahe against the Bears and played well enough to start again the following week. One positive outcome was that UT coaches learned how versatile McMillon really was. This season, McMillon (6-foot-3, 305 pounds) should be a vital contributor up front.

Vahe himself can’t say enough good things about Warehime, that’s for sure. “Very enthusiastic,” he said. “He’s a very challenging guy. He just wants the best out of everybody, and we’re starting to realize it day by day.”

D-line getting in shape: Coach Tom Herman shocked just about everybody when he declared the defensive linemen were some “really fat guys” that needed to lose some weight. At least one of those didn’t seem too upset.

“I don’t know. It’s just all smoke to me,” said nose guard Poona Ford, who is listed at 310 pounds on the roster. “We have a certain plan and what goals we need to reach every week.”

Herman has since softened his stance somewhat and praised the defensive linemen after spring workouts started. Seven defensive linemen listed on the roster weigh more than 300 pounds, something former coach Charlie Strong encouraged.

Dead Man talking: Longtime WWE star The Undertaker made a surprise appearance at Thursday’s practice and gave the Longhorns quite a jolt. Taker — an Austin resident who also goes by Mark Calaway — told players he talks up the UT program everywhere he goes.

”You wouldn’t be here if you weren’t special,” Undertaker said. “You have to want and put the work in to be great.”

Some places bark about #Culture, but nowhere else in Merica' are you going to have The UnderTaker at practice #ThisIsTexas pic.twitter.com/0o2GECHH5C

Briefly: Texas defensive coordinator Todd Orlando stopped himself in mid-thought and offered high praise for junior DeShon Elliott. “He’s been impressive to me, he really has. That kid gives us everything he has,” Orlando said. Elliott could be a starting safety who plays the wide side of the field.

For 30 years, the 3-point shot has benefited the Texas, Stanford women