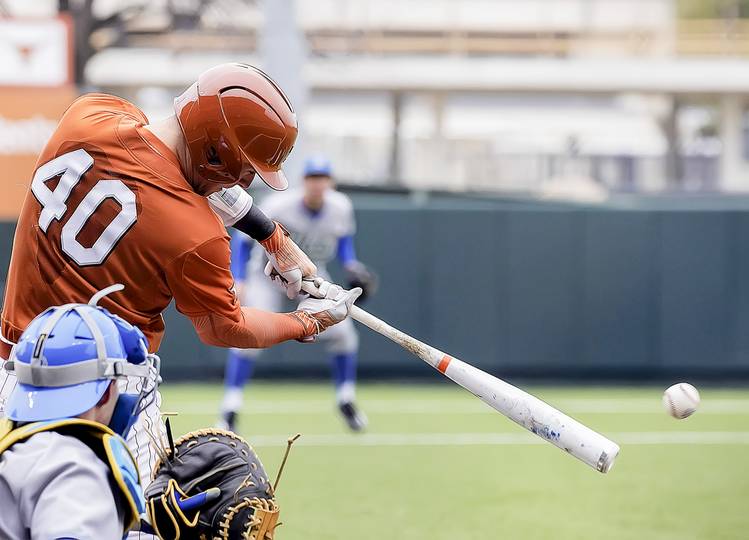 UT catcher Micheal McCann swings for a base hit during the baseball game between the UT Longhorns and the UCLA Bruins at UFCU Disch-Falk Field on Sunday March 12, 2017. JOHN GUTIERREZ / FOR AMERICAN-STATESMAN

Michael McCann has noticed that he isn’t seeing as many fastballs these days.

Texas’ sophomore catcher, though, can interpret that as a compliment. Different pitches thrown during his at-bats mean that he’s appearing on more scouting reports.

McCann, a former high school standout at nearby Cedar Ridge, played in only five games his freshman season at Texas. Then he was left off of UT’s roster in 2016. Midway through his third season, he’s been swinging a steady stick in the heart of the Longhorns’ lineup.

“I was given a great opportunity, and I feel like I’m playing hard and working every day to keep it,” McCann said.

After going 4 for 8 with two walks against Texas State and UT-RGV this week, McCann has boosted his average to a team-high .405. That average would lead the Big 12 if McCann had enough plate appearances to qualify, but he has only 37 at-bats over 13 games. He’s been sharing the space behind the plate with Michael Cantu, a junior who joined McCann in Texas’ 2014 recruiting class.

At one point this past fall, Texas coach David Pierce had only the veteran Cantu penciled into his starting lineup. Cantu, after all, had started more than 80 games in his UT career. But he has struggled to a .135 batting average over his 52 at-bats this season.

Cantu, however, possesses an unmatched familiarity with the pitching staff. He’s caught all 12 starts logged by Morgan Cooper, Nolan Kingham and Kyle Johnston this season. (He has been behind the plate for 10 of Cooper’s 18 career starts and 14 of Johnston’s 21).

McCann, on the other hand, has caught all five of freshman Blair Henley’s starts. He also has worked with a handful of relievers and starters Connor Mayes and Nick Kennedy. McCann said he’s become more comfortable with catching a variety of his teammates.

“At first, it wasn’t easy for me. It took some time to adjust,” McCann said. “I know what they have and I know where they are. I can trust them and they can trust me.”

Pierce described Cantu as a defensive stalwart who had potential power that the team was working to unleash. McCann, though, has earned some playing time with the rotation toppers like Kingham and Cooper.

“As we’re trying to get (Cantu) better offensively, we have to reward Michael McCann for his success,” Pierce said.

On the road again: Texas’ softball team will open conference play this weekend during a three-game series at Oklahoma State. The Longhorns (17-11) have gotten used to life on the road.

This will be the fifth straight weekend that the Longhorns will spend outside the city limits. Wednesday’s 4-0 win over McNeese State was only UT’s third game at McCombs Field over an 18-game stretch that dates back to Feb. 23.  Texas went 8-7 in road and neutral-site contests that were played in California and Arizona.

“Last year, we were barely on the road and now every time I look up I’m having to wash my clothes and re-pack,” said sophomore pitcher Erica Wright. “It’s really fun to travel with teammates and stay in hotels and stuff. I can’t complain too much. There’s pros and cons to traveling a lot.”

Who has reveled on the road? Over 43 away at-bats, sophomore outfielder Reagan Hathaway is hitting .302 and slugging .512 with team-highs in runs (13), walks (10) and RBIs (10). Junior pitcher Paige von Sprecken is 1-2 away from McCombs Field, but boasts a 1.09 ERA and 28 strikeouts. Perhaps fittingly, Hathaway and von Sprecken are two of the six non-Texans on the roster.

Upon its return from Oklahoma State, Texas will be at home for 10 of its next 14 games. Three of those battles at McCombs Field will be against Oklahoma, the defending national champion.

The Dotted Line: Four top Texas prospects are expected in Austin this weekend

For 30 years, the 3-point shot has benefited the Texas, Stanford women