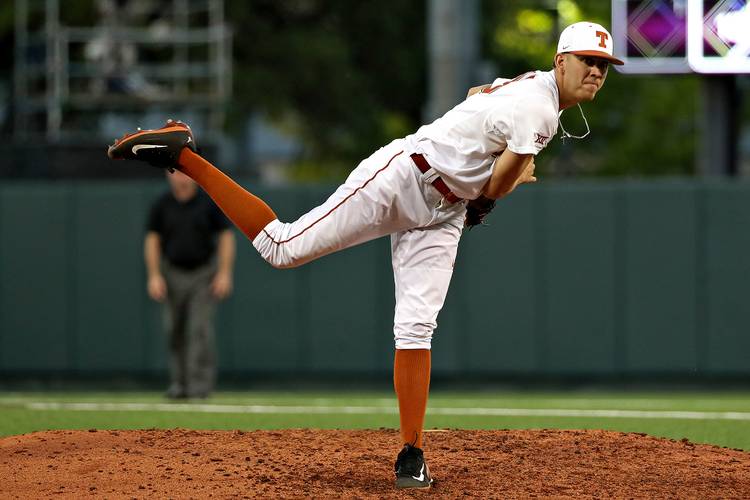 On Friday night, Texas sophomore Chase Shugart got a pie for his roommate.

The handmade pie, however, was made with shaving cream instead of more-traditional fillings like apples, cherries or pumpkins. Still, Shugart was in a celebratory mood when he smashed the inedible dessert in the face of fellow pitcher Nolan Kingham. After all, Kingham had just turned in a complete-game shutout of Kansas State at UFCU Disch-Falk Field.

How did that pie taste after the 2-0 win?

The victory, though, tasted great for the Longhorns. Swept in last week’s three-game series against Texas Tech, Texas (15-10) improved to 1-3 in Big 12 play.

Lasting past the seventh inning for the first time, Kingham threw 111 pitches and was still topping 90 miles-per-hour in the final frame. Kingham gave up four hits and two walks, and Cameron Thompson was the only Wildcat to reach second base. (Kansas State’s leadoff hitter accomplished that feat twice). The right-handed Kingham struck out five batters.

“I felt like I didn’t even have to do much. I was just sitting there catching the ball.” Texas catcher Michael McCann said. “He had real life on his fastball today, the two-seam inside was moving like crazy, slider when he needed it.”

Adjusting to college baseball, Kingham was used primarily out of the bullpen during a freshman year that the Las Vegas product described as a “punch in the mouth.” Appearing in 21 games, he went 2-3 with a 3.79 ERA. Kingham opened this season as a reliever and mid-week starter, but he was in the weekend rotation by Texas’ early-March trip to Stanford.

Kingham was the first pitcher that Texas threw during that four-game series in California, and head coach David Pierce decided to start him the following Friday in an attempt to maintain the rotation’s rest schedule. Kingham is still pitching on Friday, which is a day traditionally saved for a team’s ace. Over the last three weeks, he has allowed three runs against UCLA, Texas Tech and Kansas State.

Kingham had surrendered a homer in each of his last two starts, but the Wildcats recorded only three singles and a double on Friday night. The Big 12 entered this weekend with four players with five home runs, and three of those bats belonged in Kansas State’s line-up. Steve Serratore, Jake Scudder and Quintin Crandall went 0-for-10 on Friday.

“His stuff, it was electric,” Pierce said. “Really, his command was better than his stuff in my opinion.”

Rounding the bases: A freshman, Thompson entered the weekend as the Big 12’s leader in hits (36), while Kingham had a conference-low 0.95 ERA. Thompson went 1-for-3 with a walk. Kingham lowered his ERA to 0.72. … Texas’ last complete-game blanking occurred when Connor Mayes shut down Baylor at the Big 12 tournament in 2015. … Texas junior Morgan Cooper (2-1, 2.05 ERA) will start against Kansas State senior Parker Rigler (2-1, 2.03) on Saturday afternoon.