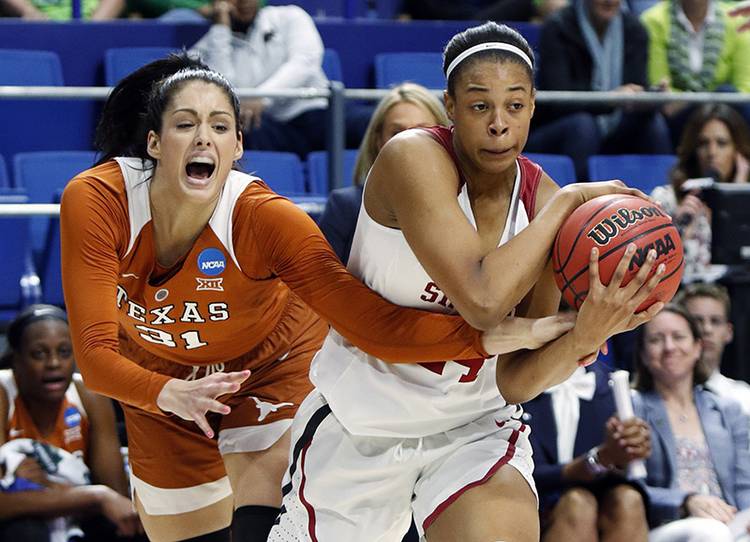 LEXINGTON, Ky. — There were no excuses from Texas players or coaches after their season came to a disappointing end.

Stanford played better, they said. The Cardinal executed with impressive precision. They shot the ball well and won the battle of the boards.

Behind forward Erica McCall and guard Karlie Samuelson, Stanford came from behind during a third-quarter blitz to defeat the Longhorns 77-66 in a Lexington Regional Sweet 16 game before 3,163 fans Friday night at Rupp Arena.

Texas (25-9) ends the year two games short of reaching its goal — playing in the Final Four.

“It reminded me a little bit of last year when we played UCLA (in the Sweet 16) and we had older players that had been through some things and really knew how to execute down the stretch,” Aston said. “It looked almost flipped this year. We had young players make mistakes that they’ll learn from, and we didn’t execute as good as we needed to.”

Across the court, Stanford was led by McCall and Samuelson, established seniors. McCall, the game’s dominant player, scored 23 points, hitting 9 of 14 from the floor and grabbed 12 rebounds. Samuelson, the nation’s No. 2 three-point shooter, scored 10 of her 15 points and finished with four three-point bombs.

It was a gritty effort by Stanford, which trailed 36-29 at halftime.  But when Samuelson opened the third quarter with consecutive three-pointers in a 17-second span to trim the deficit to 36-35, UT’s momentum crashed.

Texas would get no closer to four points of the lead in the final period.

“This just shows our heart,” said McCall, referring to the comeback. “I’m confident heading into the next game (against Notre Dame) knowing that we’re a fighting team. No matter how far down we get, we’re going to come back and fight for every rebound, every shot.”

Texas lost the rebounding battle for just the fourth time this season, 41-35.

While Samuelson made a difference behind the three-point line, Texas sharpshooter Brooke McCarty was held in check. The Big 12 Player of the Year finished with 8 points and did not attempt a three-pointer until there was 1:30 left in the game.

“(Stanford) had some quickness that was able to put a shadow on Brooke,” Aston said.

“It’s the people doing the passing,” Aston said. “It’s the ones doing the screening. And it’s the one reading screens.”

Despite the loss, Texas looked like a team poised for victory. Junior Ariel Atkins, who scored a team-high 18 points, led a second quarter surge that helped the Longhorns earn a 36-29 lead at the break. Joyner Holmes concluded her freshman season with 15 points and 7 rebounds. Audrey-Ann Caron-Goudreau provided an early lift, scoring all 8 of her points in the first quarter.

It was the last game for Texas seniors Kelsey Lang and Brianna Taylor. Part of their legacy will be helping the the Longhorns reach the Sweet 16 three straight years.

“I told them in the locker room that we’re absolutely supposed to win games and that’s what we’re all here to do at Texas,” the coach said. “But when I look at these two, we weren’t very good when they came to Texas. They brought a vision and they trusted the vision throughout their careers. I mean, they’ve been to three Sweet 16s in four years.”