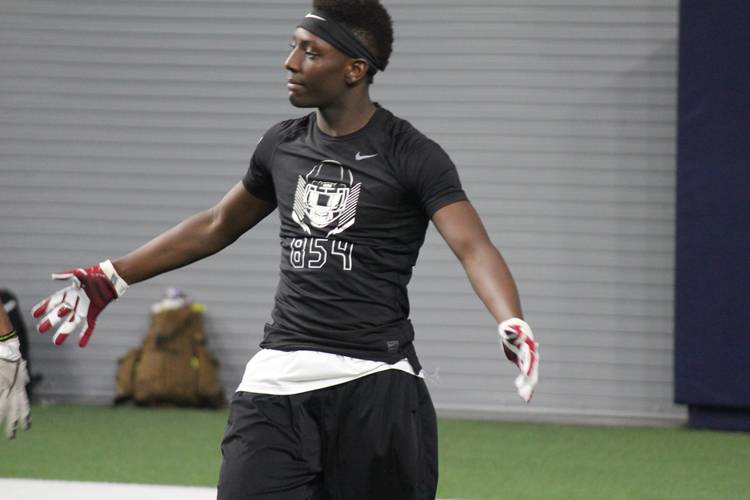 Latest on Simpson: The Longhorns are one of the few elite programs to shy away from offering Simpson. The 6-foot-7, 330-pound four-star is starting to favor schools like Texas A&M, Ohio State, Oklahoma, Oklahoma State and TCU. Simpson is a former basketball player who almost never played football in high school. He became a starter as a freshman and eventually learned football was his ticket to college athletics. Simpson is uniquely athletic for a teenager his size. The ceiling is unlimited for Simpson if he develops the aggressive attitude needed to be a dominant offensive lineman at the college and pro levels. He’s a top 10 player in Texas.

Latest on Pool: He’s not just a cool name. Pool is arguably the top interior linebacker prospect in the state of Texas and committed early to Arkansas. He’s an athletic player for his size and could potentially play outside linebacker in college if needed. His ideal fit is as a Mike linebacker who can chase plays sideline-to-sideline. He’s plenty athletic and can handle tight ends and running backs in coverage. Pool is ranked No. 17 in the Fab 55, which makes him the second-best linebacker in the state behind Texas target Alston Orji.

Latest on Douglas: The state is loaded with wide receiver talent and the Red Raiders picked up an early commitment from one of the most electric players in the state. Douglas runs precise routes and possesses consistent hands. He plays with Spencer Sanders, a Oklahoma State commit, so he’s already learned how to develop rhythm with an elite quarterback. Sanders can play outside receiver or in the slot and is most dangerous after the catch.

Latest on Ezukanma: Ezukanma emerged as one of the best wide receivers at The Opening regional in Dallas two weekends ago. He’s long and athletic, making him a tough matchup for smaller cornerbacks and slower safeties. The four-star prospect isn’t as physically mature as guys like Jalen Preston, Brennan Eagles and Al’Vonte Woodard, but once he fills out and hits a college weight room, Ezukanma can become as productive as any player in the state. His vertical jump makes him a third-down target and a red zone threat.

Latest on Humphries: Sachse High School is home to three Fab 55 members. Humphries is the lone defender of the trio. He’s not the biggest or fastest safety at these camps, but he’s rarely beaten because he understands the position and has a high football IQ. He’s a Penn State commit and seemingly fits a Big 10 defense. He’s best when he’s allowed to attack downfield, but he’s athletic enough to play in space and cover wide receivers vertically.

Latest on McKinley III: The best cornerback at The Opening regional in Dallas earlier in the month was McKinley. The four-star cornerback holds offers from numerous power programs, but the Longhorns have yet to show interest. The state isn’t short on cornerback options in 2018. McKinley is likely the type of prospect who would already hold a Texas offer in other classes, but players like Anthony Cook, Jalen Green and D’Shawn Jamison are higher on Texas’ board.

Latest on Jackson: A three-star wide receiver who projects as a slot receiver in college, Jackson is one member of the Sachse trio represented on the Fab 55. He recorded 46 receptions for 652 yards and six touchdowns as a junior with Jalen Mayden, another Fab 55 member, as the quarterback. Jackson is a tough cover in 1-on-1 drills and did well at The Opening regional in Dallas. He holds 18 offers and Texas Tech is considered the leader.

Latest on Fleeks: Fleeks put on a display at The Opening regional in Dallas earlier in the month. He plays slot receiver for Cedar Hill, but might be best suited to play running back in college. His versatility makes him a camp star. He recorded 53 receptions as a junior while adding 21 carries out of the backfield. He recently committed to Baylor.

Latest on Robinson: Texas Tech is quietly putting together a strong group of receivers in the 2018 class and Robinson is one of those commitments. The three-star slot receiver could put up big numbers in a Texas Tech offense. He caught 37 passes for 446 yards and three touchdowns as a junior, adding four rushing touchdowns and 304 yards on the ground. He’s also a skilled punt returner. Robinson is a nightmare in tight spaces and is one of the quicker receiver prospects in this class.

Latest on McCalister: There might not be a more physical cornerback in Texas than McCalister. The 6-foot, 182-pound cornerback plays the position with a linebacker mindset. He’s skilled enough to stick at cornerback, but could easily make the switch to safety because of his aggressiveness. He can be too aggressive at times and he’ll need to learn how to manage his instincts at the college level. McCalister is strong at the line of scrimmage and prefers to play bump-man coverage.