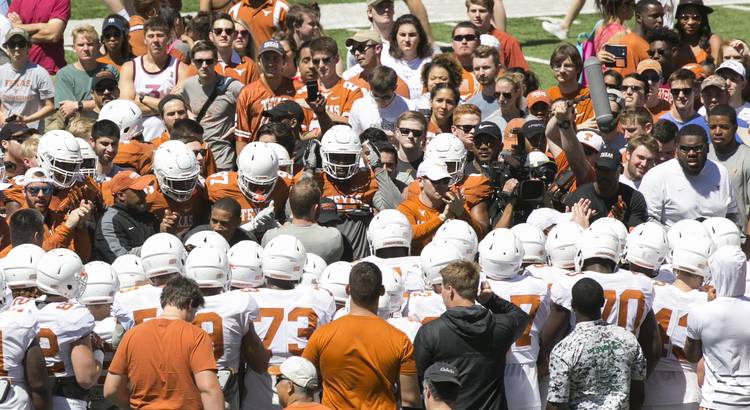 UT students stand on the field to get a closer look at the Longhorns football practice at Royal-Memorial Stadium on Saturday. JAY JANNER/AMERICAN-STATESMAN

They all stood there, circled around the field and behind the ropes, watching the Texas football team practice.

Students. Fans. Texas fans. Football fans. They were at Royal-Memorial Stadium, watching a new coach and a new team get ready for a new season. About 300 students were there. Most were on the field. Some were in the stands. They watched the entire team practice. From Shane Buechele to Malik Jefferson, from Sam Ehlinger to John Burt, from drills to a scrimmage. The sky was clear. The sun was shining. The temperature was pleasant — in the low 80s. A beautiful day.

Texas held a student appreciation practice Saturday afternoon, the first time UT has ever done that. In the past, it has held similar events at which fans can sit in the stands and watch. But that was for everyone: adults, kids, parents, grandparents, teenagers. Never had there been something only for UT students. They got to stand on the field. They got a swag bag. They got to meet the players and get their autographs and take pictures with them.

“It’s really important because we play for our student body,” head coach Tom Herman said in a statement. “We are a representation of the student body. We exist solely for the purpose of morale and school spirit, and we want to give back to the students.”

Ohio State did this when Herman was there, and when he went to Houston, he did it there. Now he has brought it here. The gates opened at noon. The practice started at 12:30. The students trickled in.

The field was roped off, but students stood on the turf, a couple of yards from the team. They could hear the yelling, the trash talk, the grunts. Even though it was RoundUp at UT and the WGC-Dell Technologies Match Play was taking place, students still flocked to DKR.

“I’m super excited to see what Herman’s doing for our program and what he’s encouraging the guys to do,” 19-year-old sophomore Avery Lavender said.

“I’m out here to support the football team. Tom Herman’s coming in from Houston. I’m from Houston. Just have that Houston flavor at UT. I just want to come see the calm before the storm,” 20-year-old junior Jeremy Ukazim said.

“It’s nice to actually be on the field. Normally … you can’t really see things. But it’s good to be this close and actually be a part of the team,” 20-year-old junior Praj Maohan said.

Music blared. One hour passed. Then two. Three. Some students left, but others stuck it out for the entire time. The sun kept shining. A plane flew overhead. A cloud never appeared.

“Can I have a ball to warm up?”21-year-old Rikin Tanna asked staffers toward the end of practice. Tanna, along with eight other students, was getting ready to participate in skills competitions.

Last Wednesday, about 30 students were in five skills competitions: accuracy drill, receiving drill, 40-yard dash, sled push and obstacle course. Saturday, the two winners from each skills contest competed against each other. The winner will go up against former UT football players during the spring game.

At 4, the practice ended. The equipment for the skills competition was set up. Tanna did the accuracy test. David Porter IV did the receiver drills against Justyn Betancourt. Avery Pawelek went up against Daniel Stokes in the sled push. Pawelek and Betancourt ran the 40.

Betancourt won the receiver drill. Stokes won the sled push. Pawelek won the 40. Tanna won because he didn’t compete against anybody. The team watched.

“I just wanted to come out and try the drills that these guys do every day,” Stokes said.

After the skill competition, the students and the team gathered at midfield and Herman spoke.

“As long as we’re here, you will be a tremendous sense of pride and motivation for us,” Herman told the students.

After he spoke, the students and the team gathered for a group photo. A team photo, if you will. They all flashed the “Hook ’em, Horns” sign. They don’t all play for Herman, and they don’t all wear a burnt orange jersey, but the students were still in the picture with the team.

Because they are all Longhorns.

Will Licon shines at NCAA Swimming and Diving Championships