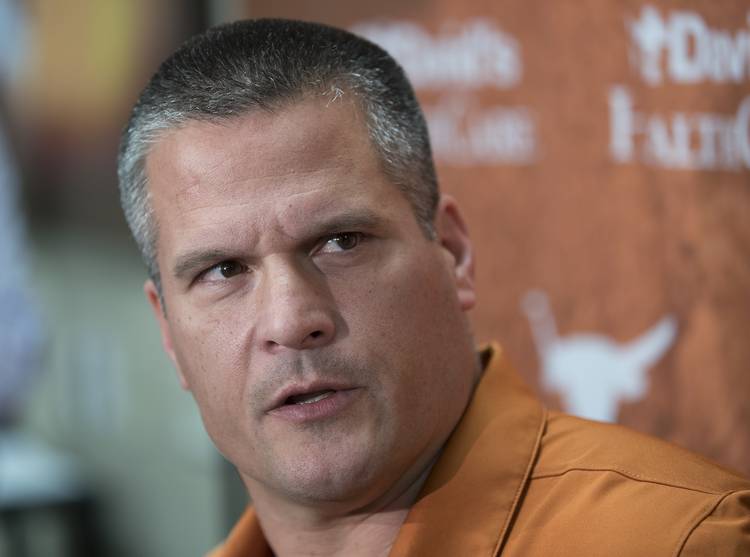 University of Texas defensive coordinator Todd Orlando answers questions from the local media about his strategy for the Texas Longhorns at the Moncrief Athletics Complex, UT campus at Royal-Memorial Stadium on Wednesday, Feb. 22, 2017. RICARDO B. BRAZZIELL/AMERICAN-STATESMAN

Had Todd Orlando followed his originally intended path, he might be somewhere sweating out market corrections, weighing political risks and managing client expectations. Such is the life of a financial advisor.

Instead, the Pittsburgh native got enamored with coaching and helping young people and never looked back.

Fiduciaries and football coaches face the same risks, actually. Past performance is not indicative of future results.

More than two decades of playing and coaching experience will be beneficial as Orlando begins his first year as Texas’ defensive coordinator. The Longhorns are coming off two of the worst defensive years in school history. Oh, and UT resides in the most explosive offensive league in college football.

“The one thing I’ve been impressed with, there’s a part of this group that is not resistant to the change we have in here,” Orlando said before spring practice started.

Players have opened their hearts and their minds, he said. “I think it’s been, ‘Coach us. Tell us. You want to win a championship? Show us how it’s done,’” Orlando said.

Texas coach Tom Herman sure believes in Orlando, who turned 46 on Friday. He’s been given a three-year deal worth $1 million annually. That makes Orlando the highest paid assistant in UT history but also puts him on par with industry peers.

“I mean, I’ve seen Todd Orlando make chicken salad out of some lesser parts,” Herman said, “so I have a lot of confidence in that staff and what they’re able to do with whatever talent that we’ve inherited.”

Orlando played football for coach Barry Alvarez at Wisconsin and helped the Badgers win the 1994 Big Ten title. He started coaching in high schools and eventually landed a job coaching linebackers at Pennsylvania. His career took really started moving in 1999 when he landed at UConn, where he rose to become the defensive coordinator by 2005.

Orlando spent two years as the defensive coordinator at Florida International and Utah State before landing with Herman at Houston in 2015.

Orlando was tabbed as Houston’s interim coach after Herman left Houston for Texas. It was a natural step. Orlando wants to be a head coach someday, and it was thought he’d be a leading candidate with the Cougars. Instead, the job went to Herman’s offensive coordinator, Major Applewhite.

That hasn’t changed Orlando’s long-term career goals. Now he has the chance to help rebuild one of the biggest brands in college athletics. It’s the perfect launching pad for someone who wants to become a head coach himself.

Asked if he was disappointed in not getting the Houston job, Orlando said, “I don’t think it was the let-down part of it. I just thought it was a great experience for myself. You get to a certain point in your career, and a lot of guys shy away from that because they think they’re going to ruffle feathers.

“My relationship with Tom Herman is unbelievable,” he added. “So when you’re looking at being the head coach at Houston or coming here and working for Tom Herman as a defensive coordinator, there is no disappointment in that.”

Make no mistake, this will be the toughest challenge of Orlando’s career. American Athletic Conference teams averaged 31.1 points and 423.2 yards per game last season. Big 12 teams averaged 33.5 points and 474.9. Oklahoma, Texas Tech and Oklahoma State all finished among the top 17 teams nationally in scoring last year.

The Longhorns allowed more than 30 points per game each of the last two years. The 1997 squad still holds the record for allowing 33.3 points per game. The 2015 and 2016 teams now hold the second and third spots in the record books.

Players know their recent results are unacceptable. “To see some other schools around this state that have kind of leapfrogged us, I guess you could say, is not something that we like or shouldn’t like,” said John Bonney, a cornerback who Orlando has moved to safety.

It’s up to Orlando and the defensive staff to unlock this team’s potential. Malik Jefferson, Breckyn Hager, Malcolm Roach, Kris Boyd, Davante Davis, go right on down the list. All of the Longhorns appear eager to hear what Orlando has to say.

Orlando calls it a “production business.” He hopes to generate some at Texas.

“I think there’s a certain level you have to get to play good defense,” Orlando said. “There’s so much more to just lining up and executing a play, it really is.

“We’re not coming into a situation where we don’t have guys who can’t run and do all those things,” he added. “It’s why are you doing it. That, to me at the end of the day, each positional coach that is here and me as the coordinator have to explain to guys, ‘Why would Malik want to do this?’”

Editor’s note: This is the last of an occasional series profiling Texas’ new assistant football coaches. Past stories:

STAN DRAYTON: Can he do for Chris Warren III what he did for Ezekiel Elliott, Carlos Hyde?

DEREK WAREHIME: Front and center, he aims to finish the rebuild of the offensive line.