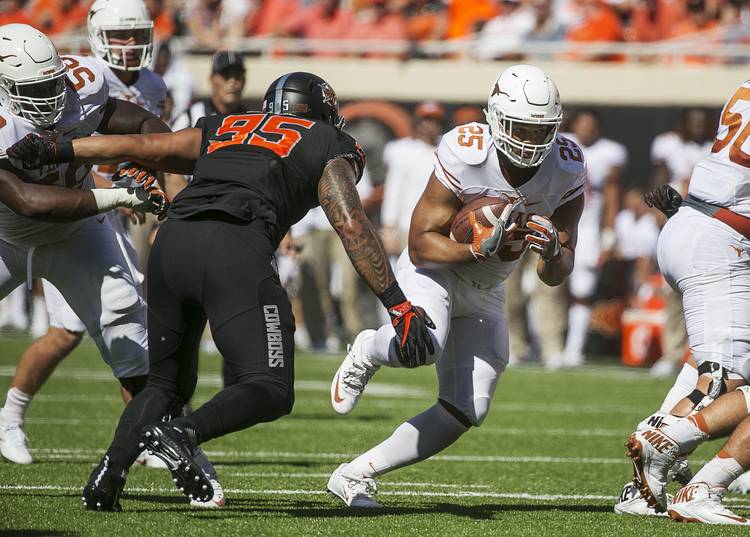 With Foreman now preparing for the NFL draft, Warren figures to be UT’s leading ballcarrier under first-year coach Tom Herman.

But Warren suffered a hamstring injury during Saturday’s scrimmage and there is no timetable established for when or if he will return this spring, according to Texas officials.

Warren, fellow running back Tristan Houston (ankle) and center Zach Shackelford (ankle) were all dinged up Saturday. “There is no timetable at this point for their return,” the school announced.

Also, offensive tackle Brandon Hodges did not participate in Saturday’s scrimmage and will miss some practice time to focus on academics.

Warren played in four games last season before suffering a knee injury against Oklahoma State. He was averaging 5.9 yards per attempt and scored three touchdowns.

Once he went down, the UT coaching staff turned its full attention to Foreman, who was dazzling in a full-time role. Foreman finished the year with 2,028 yards, 15 touchdowns and was named the nation’s best running back. It’s widely believed that Foreman would have never achieved such success had Warren not gotten hurt.

With Warren and Houston both sidelined this spring, there should be plenty of practice repetitions available for freshman Kyle Porter and Toneil Carter, a mid-term enrollee in the 2017 recurring class.

Coach Tom Herman is fully aware of Porter’s background. He led Katy to a state title but got only 46 rushing attempts last season serving as the third-stringer behind Foreman and Warren.

Carter fully intended to enroll at Georgia in January. But the Bulldogs backed away after the depth numbers shifted against the 6-foot, 205-pounder from Houston. Carter grabbed a spot at Texas after rushing for 3,712 yards and 55 touchdowns during his high school career.

Students get close-up with football team on appreciation day