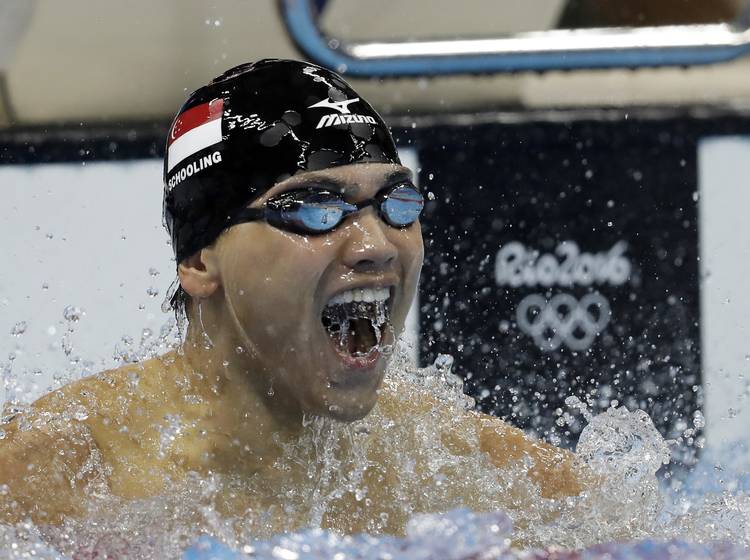 INDIANAPOLIS — After beating Michael Phelps to win gold in the 100-meter butterfly last summer at the Rio Olympics, Joseph Schooling needed a break from swimming.

“It can’t always be 100 percent all the time,” said Schooling, a Texas junior who swam for his home country Singapore in Rio. “You need to be away from something. And I needed to miss swimming before I could be 100-percent focused on my next target.”

Following the Olympics, Schooling did not swim consistently from August until December. He had achieved his goal in Rio, and it was hard for him to refocus.

During his time off, he visited Singapore. He said he did his own thing at school, spending time with friends and doing what college kids do.

When he started training again in December, Schooling said he felt fresher and happier with the sport. He said he put in four months of good work, and it has shown at the NCAA swimming and diving championships.

Schooling propelled the Longhorns’ 200-yard medley relay to victory on Friday, just a day after leading two other relays to national titles. He also finished second in the 100-yard butterfly, falling to Florida’s Caeleb Dressel, who set an NCAA record.

With help from Schooling, the Longhorns sit in first with 391.5 team points. One day of competitions remains, and California sits in a distant second with 253 points.

Like Schooling, Townley Haas won a gold medal in Rio. The UT sophomore swam on the U.S.’ 800-meter freestyle relay, teaming up with Olympic stars Michael Phelps and Ryan Lochte.

Though Haas did not take as long a post-Olympic break as Schooling, he still spent two weeks out of the pool before easing back into training.

“Coming down off something like that, it’s kind of hard to get back in,” Haas said. “I took my little bit of rest and started training hard again.”

Haas built off his swims at Rio, and he used the lessons he learned at NCAA championships. He won the 200-yard freestyle title on Friday for the second straight year, holding off late charges from USC’s Dylan Carter and Indiana’s Blake Pieroni.

“If I learned something from Rio, it’s to swim your own race,” Haas said. “I was just trying to get out fast like I normally do and just hold on.”

The Texas team features four Olympic gold medalists, none of which have skipped a beat in Indianapolis. Jack Conger has been on two of Texas’ winning relays and Clark Smith won the 500-yard freestyle on Thursday.

Haas said college swimming feels different after the Olympics, and Schooling agreed. Still, it’s exciting for the Longhorns Olympians to put up fast times for their team.

Since coming home from Rio, Schooling said he’s had to adjust goals. He ultimately wants to set the world record in the 100-meter butterfly, but he’s currently focused on something else: Making sure Texas wins its third straight NCAA title.

With how Schooling, Haas and the Longhorns swam on Friday, they seem to be in good shape.