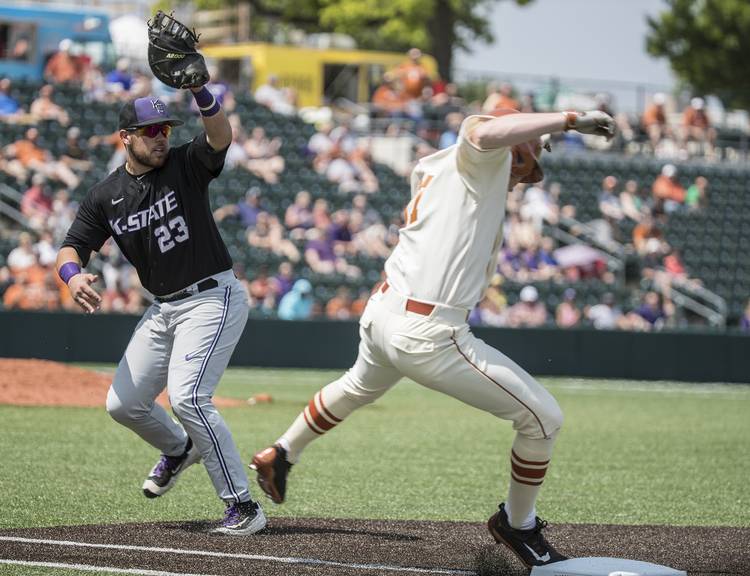 USE THIS PHOTO Texas Longhorns (37) Ryan Reynolds comes in safe at firstbase against the Kansas State Wildcats (23) Jake Scudder on Sunday March 26, 2017 at UFCU Disch-Falk Field RICARDO B. BRAZZIELL/AMERICAN-STATESMAN

Backed by its pitching for most of the weekend, Texas turned to its bats and gloves on Sunday.

Tate Shaw robbed a home run while Kody Clemens hit one in Texas’ 6-5 win over Kansas State at UFCU Disch-Falk Field. One week after they were swept by nationally-ranked Texas Tech, the Longhorns evened their Big 12 record at 3-3 with the series sweep of Kansas State. Texas (17-10) last swept a conference opponent in 2015.

“We got swept by Tech and now we’re right back in the hunt,” Clemens said. “We’ve got a long ways still, so being able to get those three wins back is huge for us.”

Texas hadn’t not allowed a run since UT-RGV’s seven-run effort in the first inning of Wednesday’s non-conference meeting. Pitchers Nolan Kingham and Morgan Cooper threw weekend shutouts of Kansas State,  and it was a 0-0 tie through the first three innings on Sunday.

In the fourth, Shaw robbed Wildcats designated hitter Trent McMaster of a two-run homer. The 5-11 Shaw nearly leaped over the fence in front of Kansas State’s bullpen in left field — which was shortened during offseason renovations — to extend Texas’ shutout streak to 30 innings.

Shaw told reporters he was relying on instinct since Texas doesn’t practice such plays. He, however, expected to make the catch.

Shaw made his first-ever collegiate start earlier this month. The sophomore from Westlake, though, has given Texas coach David Pierce no reason to remove him from the lineup. Shaw was hitless Sunday, but is hitting .359. The younger brother of former Texas outfielder Collin Shaw, he also made a nice catch to close out Texas’ 2-0 win on Friday.

“He has that grit that you look for in ball players,” Pierce said. “He’s not the most-talented, but he’s got the most grit on the team, and he proved that on the play in left field today.”

Kansas State ended the Longhorns’ run of scoreless innings during a four-run fifth. The Wildcats also scored in the seventh.

Texas struggled while hitting with runners in scoring position throughout this weekend, but Travis Jones delivered a three-run double down the left field line in the sixth inning. That hit changed a 4-2 deficit for Texas into a 5-4 lead. After Kansas State tied the game in the seventh, Clemens homered in the inning’s bottom half.

Next week, the Longhorns play at Texas A&M-Corpus Christi and Kansas.

Rounding the bases: Texas sophomores Chase Shugart and Beau Ridgeway made relief appearances that respectively lasted 2.1 and two innings. Shugart picked up the victory while Ridgeway earned this fourth save. … Texas junior outfielder Patrick Mathis pinch-hit on Sunday and was hit by a pitch. Mathis had not played since he suffered a leg injury against Texas A&M on March 14. … Texas turned its 31st and 32nd double plays of the season. … The Big 12’s leader in hits, Kansas State leadoff hitter Cameron Thompson reached base in all five of his at-bats (three hits, a walk and a fielder’s choice).

Will Licon shines at NCAA Swimming and Diving Championships