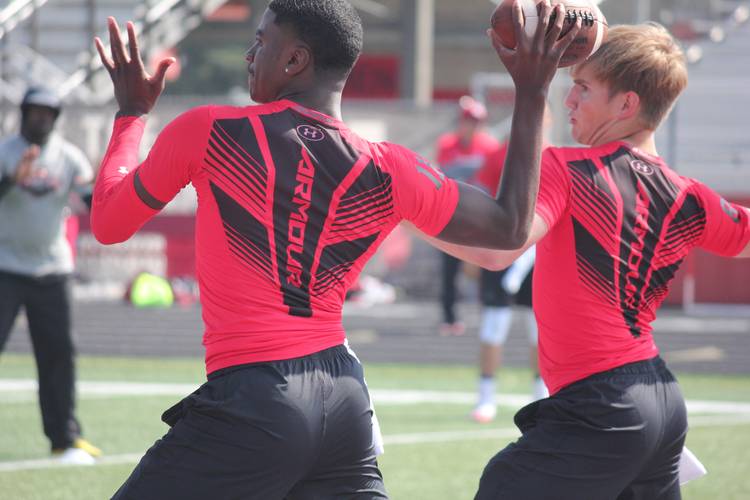 CEDAR HILL — Louisiana’s Justin Rogers arrived in Austin for Texas’ junior day on Feb. 25 with anticipation. The four-star quarterback from Parkway, La. made the five-hour drive hoping he’d get a Longhorns offer. He left disappointed.

One month later, though, Rogers has received his offer.

“It felt like validation,” Rogers said during Sunday’s Under Armour All-America Camp Series at Cedar Hill High School. “There was a mix-up watching my film, and I was under the impression Texas was going to offer me when I was there for junior day. I mean, I understand (UT coach Tom Herman) was busy moving and taking care of everything new at Texas, so he apologized for the confusion and we’ll move forward.”

Rogers impressed on Sunday, throwing alongside other top quarterback prospects against some of the top-rated secondary players in the nation. The 6-3, 198-pound signal-caller entered the camp ranked as the nation’s No. 10-ranked dual-threat quarterback.

“My footwork and understanding how to anticipate when to throw the football is improving from when I was doing these camps last year,” Rogers said. “My arm strength is improving as I get stronger. I want to be known as a relentless player. It’s all about winning with me.”

A blue-chip quarterback is a key component to a successful class. The Longhorns have seven offers extended to 2018 quarterbacks with Rogers and Oklahoma product Casey Thompson the highest priorities. Thompson, who also attended junior day, will visit Texas this upcoming weekend.

Rogers said he understands the importance of leading a class. He said it’s too early for him to name a top school, but that he wants to make his decision by June.

“As a quarterback, you want to commit early so you can start recruiting guys for the class,” he said. “I’d say the latest I’d decide is by June. When it feels right, I’ll do it. I’m not one of those guys who will announce a date or anything.”

Rogers holds an LSU offer and the Tigers must be considered a favorite considering the Tigers’ record recruiting in-state. Few recruits that LSU covets leave the borders and Rogers is aware of that stigma.

“Everybody in Louisiana, from teachers to administrators to people you see at the gas station, are LSU fans, so there is a lot of pressure to stay in Louisiana,” he said. “Growing up, I don’t know one kid who didn’t want to go play for LSU. You just block it all and make a decision that is best for you. Other people’s opinions can’t dictate your life.”

Rogers is considering LSU, but also is interested in out-of-state schools like TCU, Oregon, Louisville and North Carolina. The Longhorns are now squarely in the mix after mending wounds with the recent offer.

“I know coach (Tim) Beck and he coached a lot of great players at Ohio State, and Herman did the same thing at Houston,” Rogers said. “They run a similar offense to what I run at my school. I’m still doing my research and enjoying the recruiting process. I’ll be checking on the depth chart, mainly. My relationship with the coaches and their relationship with my family would be my second deciding factor.”

Rogers expects to attend TCU’s and LSU’s spring game and, as of now, doesn’t have a return trip officially planned back to Austin.