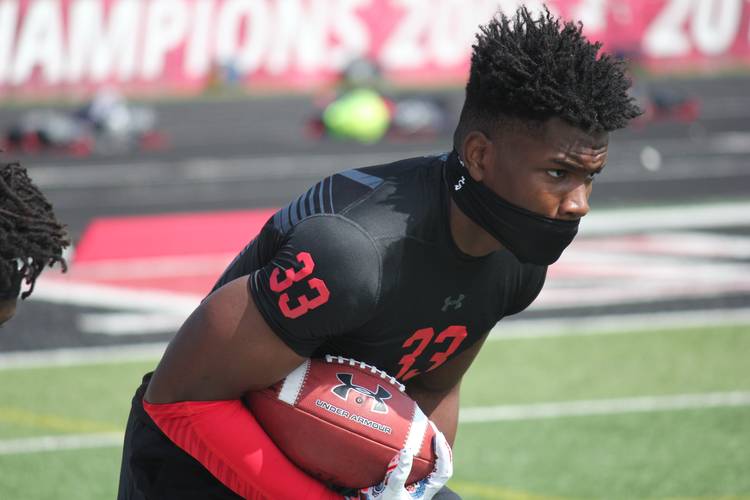 Nearly a dozen legitimate Texas targets for the 2018 class were on display Sunday at Cedar Hill High School as part of the Under Armour All-America Camp Series. It’s a down year for Dallas-area recruiting. A week before, the UA camp was in Houston where most the top Texas targets in this cycle call home.

Still, there were a handful of prospects with Texas offers who showcased their talents in Cedar Hill:

Rogers looks like a future star. He carries himself with confidence and didn’t shy away from a single rep during Sunday’s competition. He doesn’t have the cleanest delivery and his footwork leaves something to be desired, but his pure athleticism and arm stood out in the quarterback group. He and Casey Thompson — an Oklahoman who also holds a UT offer — were clearly the top two 2018 quarterbacks at the camp, and the Longhorns hope to land a pledge from one of those two by this summer. Rogers won the 1-on-1 battle at camp Sunday because he was more consistent.

Hobbs is quickly becoming one of the top linebacker prospects in the state. He visited Texas’ scrimmage last Saturday before competing at Sunday’s camp. The 6-3, 208-pound linebacker said he likes the new Texas defense and could see himself playing the Rover linebacker position under defensive coordinator Todd Orlando. Hobbs possesses all the physical tools needed to become a star linebacker because he has the physicality to take on blocks and help against the run, while these camps are also showing his ability to play in space and cover running backs and tight ends. Hobbs is extremely high on the Longhorns and it’s safe to assume Texas leads after Saturday’s visit.

Hobbs, a middle linebacker, and Orji, an outside linebacker, are the only two in-state linebackers with UT offers. Orji has enough quickness to play outside linebacker if needed, but his best position would be in the middle. He’s physically mature and is improving his coverage abilities with each camp. His strength is playing physical against the run and these camps, which don’t include pads or helmets, simply don’t allow for a defender’s physicality to be on display. Orji said Texas will be on his top 10 list when he eventually releases it this spring or summer.

The DeSoto cornerback continues to impress at camps. He’s one of the taller cornerbacks in the country and could eventually move to safety because of his height. His athleticism allows him to play man coverage against the top wide receivers at these camps. His length allows him to make plays on passes that most cornerbacks can’t reach. Green recently picked up an offer from Texas, but the Longhorns won’t be considered a favorite to land him unless they also offer his twin brother — German, who doesn’t have a lot of film due to a nagging injury as a junior. Both brothers have said they’d eventually commit to the same school.

Tatum was the best defensive end at the camp. His combination of size and athleticism make him a tough man to block in 1-on-1 situations. He does a good job using his hands to engage offensive linemen before using his strength to dislodge blockers. Tatum also is quick enough to get to the edge with a speed rush, though, he’s best when he rushes from speed to power, not the other way around. He has the frame to eventually play defensive tackle, but he’s best suited to play strong side end at this point in his development. With most of the in-state defensive ends looking elsewhere, Tatum is a high-priority recruit for Texas.