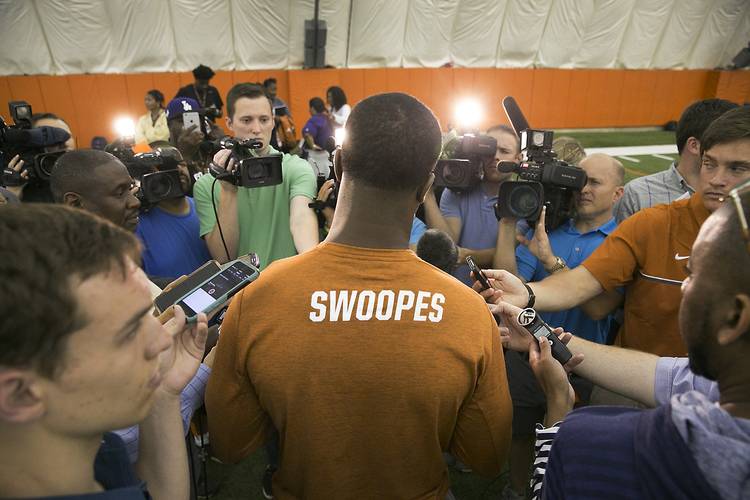 This past season, Tyrone Swoopes told reporters a story about when he lobbied for playing time at tight end.

Texas was missing an injured Caleb Bluiett during the 41-7 win over UTEP on Sept. 10, so Swoopes told then-coach Charlie Strong that he could take his teammate’s place. Strong ignored the request. Swoopes instead had two carries against the Miners as a backup quarterback.

Six months later, though, that story has become a reality for Swoopes.

Swoopes threw for 3,038 yards during a roller-coaster career at Texas, and he endeared himself as a physical runner in the team’s “18-Wheeler” package. At Texas’ pro day on Tuesday, he attempted to woo NFL teams that were looking for a tight end.

“I think I can raise quite a few (eyebrows) just with how well I move and how well I caught the ball,” Swoopes said. “I think I deserve a shot, just like anybody else.”

Swoopes was one of 15 players who participated on Tuesday for representatives from all 32 NFL teams. Three of those Longhorns were tight ends — Swoopes, Bluiett (who was once a defensive lineman at Texas), and fellow former defensive lineman Quincy Vassar.

Swoopes said he completed 19 reps on the bench press and recorded a 35-inch vertical jump. His family was told that he was timed at 4.65 seconds in the 40-yard dash. Those would have been top-10 numbers among tight ends had he been one of the 19 tight ends invited to the NFL scouting combine.

Swoopes, who was catching passes from former UT quarterback David Ash, also was impressive with his hands and route-running.

“I feel like it was a pretty good day,” said Swoopes, a 247-pound prospect who said he felt “great.”

As he transitioned to a new position, Swoopes said he worked daily on his technique. He has been training at the McKinney-based Michael Johnson Performance, and he also picked up pointers from former Texas receiver Mike Davis.

Swoopes said his agent has heard from a few NFL teams. ESPN.com reported that the Bears, Buccaneers, Cowboys and Seahawks were interested in his services. On Tuesday, Swoopes had an opportunity to impress those teams as well as his former teammates.

“Tyrone’s Tryone,” Bluiett said. “He’s an athletic guy. You tell him to do something, he’s going to do it. That’s one of the reasons why I respect what he does.”

Did D’Onta Foreman make some money at Texas’ pro day on Tuesday? ‘I definitely do. Yes sir’