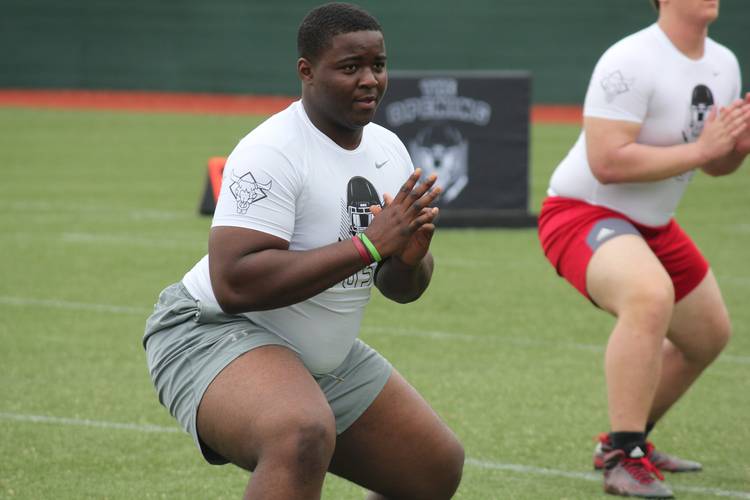 Modern recruits are often teased and dismissed for accepting the spotlight that’s placed on them during recruiting. A prospect releases his top 15, and we joke. Another one announces his 58th offer from Directional University and we roll our eyes. It’s our way.

Fort Bend Marshall offensive lineman Barton Clement wants nothing to do with the hoopla. He rarely does interviews, and when he does them at camps his answers are short and to the point. He isn’t rude. In fact, Clement comes across as a nice and mature young man. He’d simply prefer to block defenders than talk about himself.

“All of the recruiting attention hasn’t changed him,” said Marshall coach James Williams. “He doesn’t talk about it much. You’d honestly never know he had these offers by the way he carries himself. That’s Barton. He understands the importance of the decision he has to make, but he’s not going to be public about it.”

Williams knew a future star was joining his program before Clement took a single high school class. The now 6-3, 301-pound Clement caught his future coach’s eye during summer workouts before his freshman year of high school.

“He was a strong kid with size and we needed bodies on the offensive line. Most freshmen aren’t ready to play varsity football, but from day one he belonged,” Williams recalled. “He’s just special. He was making calls as a freshman. He isn’t just a strong guy with a big body. He’s a focused and intelligent person and that’s evident in his play.”

Clement holds offers from Texas, Texas A&M, Michigan, Oklahoma, Auburn and more. He’s ranked No. 8 on the American-Statesman’s Fabulous 55 and is the No. 6-ranked guard in the country per 247Sports’ composite rankings. The Aggies are considered the leader, but he did make it down to Austin for junior day in late February.

“I like the city. It is amazing and there are a lot of things to do,” Clement said on his visit. “Herman felt like an excitable guy and is very energetic. His message is that you always need to go 1-0 and everything that you do counts.”

Clement admits he’s a better run blocker than pass blocker at this stage in his development. He hoped the camp circuit would aid him in learning new techniques to carry over to his senior season. When asked what he wanted coaches to see on film, Clement simply replied “me blocking people into the ground.”

“On the outside, he’s a real nice kid. You wouldn’t guess he could play with the type of physicality he plays with by knowing his personality,” Williams said. “Like all great players, he has a switch when it is time to compete. A lot of that credit should go to his parents. They’ve raised great young men.”

Clement is an interior line prospect. His lack of height keeps him from moving to offensive tackle. But that doesn’t mean he lacks the coveted trait of position flexibility. A natural guard, his current head coach thinks he could play a different position in college if needed.

“I definitely think he can play center in college,” Williams said. “The big guards and tackles at top programs are usually 6-foot-4 or taller, so center might be the best place for him long-term. His experience and football IQ would translate well to center and he’s worked there before.”

Clement is one of four guards in the 2018 class with Texas offers. Two of those — Jamaree Sayler and Trey Hill — are out-of-state, while in-state four-star prospect Chasen Hines recently committed to LSU. The Longhorns have offered Allen’s Trey Stratford, who plays tackle in high school but likely transitions inside to guard at the collegiate level.

Did D’Onta Foreman make some money at Texas’ pro day on Tuesday? ‘I definitely do. Yes sir’