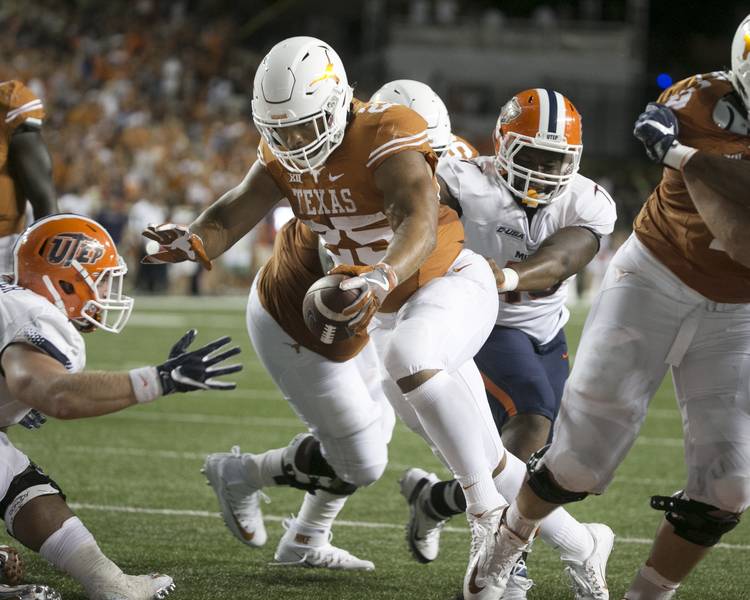 Texas coach Tom Herman loves his receiving corps. And if you held his feet to the fire, linebacker production would be his biggest concern so far this spring. “But again,” he said, “I’m not concerned about a whole lot.”

Running back depth sure seems like a problem, though.

The Longhorns suddenly look razor thin in the backfield after Herman announced on Thursday that Chris Warren III (hamstring) will be shut down for the remainer of spring drills. Tristan Houston and Toneil Carter will also miss Saturday’s scrimmage due to ankle injuries.

Oh, and Kirk Johnson is still bothered by knee problems. What’s he shown the coaching staff? “Not much,” Herman said. “I don’t think he’s gone through a full practice in pads.”

These appear to be dire times for burnt-orange ballcarriers. Fortunately for the Horns, the season opener is still months away. But it was noticeable that 5-foot-11 freshman Kyle Porter was the only scholarship running back on the field for Thursday’s workout.

Houston and Carter are slated to return to practice Tuesday, Herman said, and UT trainers will likely proceed with caution. Still…

“It’s a little scary,” the coach admitted. “It makes you nervous. I’m glad we signed two. It’s a very physical position. Very rarely, I don’t know that I’ve ever had a back go an entire season without missing a little time here and there.

“You better be deep in that room. Kyle is kind of the last man standing on scholarship. Hopefully on Tuesday, we’ll triple that number of Tuesday — go from one to three.”

Skeptics will see that Warren’s been sidelined again and ring alarm bells. He missed most of last season with a knee injury that did not require surgery. The 250-pound bruiser from Rockwall averaged 5.9 yards per carry during the first four games and left Stillwater, Okla., in street clothes and a knee brace.

“Two injuries is not something to be concerned about, both unrelated,” Herman said of Warren. “The knee is fine, and he got twisted around and kind of torqued his hamstring a little bit. You start getting into the four, five or six injury category, then God’s probably trying to tell you something. But at this point, not concerned at all.”

Still QB shopping: Herman is learning firsthand what former coaches Mack Brown and Charlie Strong knew all too well: getting accepted into Texas as a graduate student is extremely difficult.

Finding a graduate transfer quarterback good enough to compete for the starting job yet smart enough to qualify academically is a tall order at UT. That may have been a reason why LSU’s Brandon Harris announced last week he was picking North Carolina over Texas.

“We keep checking the waiver wire,” Herman said. “Gotta make sure we can get them into school. That’s an issue here in our graduate school. So we’ve got to make sure that we can get them in, and hopefully we can find one to provide some depth and competition in that room.”

Speaking of the quarterbacks, Herman detailed his thoughts on returning starter Shane Buechele and freshman Sam Ehlinger after Thursday’s workout.

“Shane, you can tell he’s played 12 college games,” Herman said. “There’s some season-ness to him. Practicing against this defense is as hard as it gets for a quarterback in terms of protections, checks and runs, because it feels like they’ve got 15 guys on the field at all times. It’s difficult, but you can tell he’s got some poise back there and some game experience where it’s not too fast for him.

“Sam, it’s still pretty fast for him, but you’ll see glimpses,” he said. “When things are clean, he makes some nice throws, makes some good decisions. So I think you can win with either one of them, But Shane, you can tell he’s got some experience.”

Briefly: Also on the injury front, center Zach Shackelford (ankle) will be sidelined the rest of spring practice. Defensive tackle Marcel Southall will also miss the rest of spring drills to focus on academics, same as offensive lineman Brandon Hodges.

Tight end Andrew Beck (foot) is being eased back into workouts, mostly as a precaution. “It feels a lot better,” Beck said. “Our training staff has been working with me frequently, and they’ve been doing a really, really good job. I’m just old, so everything hurts.”

The Dotted Line: Texas targets discuss the Longhorns at Under Armour camp