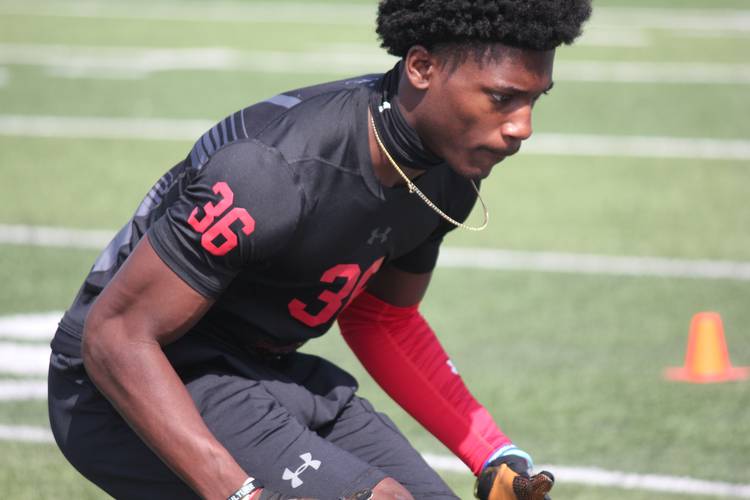 Hobbs left Austin and headed straight to Cedar Hill High School for Sunday’s Under Armour All-America Camp Series in Dallas. The 6-3, 203-pound outside linebacker prospect from Fort Worth Eastern Hills couldn’t contain his smile when discussing his latest visit to Texas.

“The Texas visit was a big deal for me. I definitely enjoy Texas,” Hobbs said. “Getting out there with coach Herman and coach Orlando watching the defense dog the offense. They want me to be part of the family and help rebuild Texas.”

He listed Texas, TCU, Oklahoma, Oklahoma State and A&M as his top five, with no leader. “Right now I’m just enjoying the process,” he said.

Hobbs wants to play Rover in college, a version of an outside linebacker. Texas’ new defense uses the Rover and Hobbs was able to watch the position Saturday.

“Texas showed me a lot. They have the position I want to play,” he said. “Coach Orlando is aggressive. For an old guy, he has a lot of juice. The practice was energetic.”

Hobbs wasn’t the only linebacker target participating in Sunday’s camp. Rockwall’s Alston Orji, the only other in-state linebacker with a Texas offer, also was on display and talking about the Longhorns.

“Texas is doing great things right now,” Orji said. “Their staff reaches out to me a lot and we talk about the future for me and the program. I think they’re going to turn things around quickly.

“They think I can play multiple linebacker positions, and I think that of myself. I want to be known as a versatile linebacker who can play inside or outside. I don’t have a top 10 yet, but Texas will be in it when it is released.”

Education is a key to Orji’s recruitment. His older brother just signed to play football at Rice. Texas understands it needs to show Orji its educational chops, and that’s exactly what Orji is currently learning about UT.

“They have good proximity to resources for their players because the dorms are close to the academic center, and that’s close to the coach’s office, so it is easy for them to always be checking up on the players and what they’re doing in the classroom,” Orji said. “It’s just a walk away for everyone involved and that’s important.”

Texas, Oklahoma, Texas A&M and Arkansas were the four schools he mentioned when discussing the coaches he’s grown the closest to during the process. He spent 1-on-1 time with Herman and Orlando on junior day and it left a lasting impression.

“We got to talk football and life,” he said.

Another Texas offer there was Desoto’s Gemon Green, the long, lanky cornerback who helped the Eagles win their first state championship in school history last year. He could play corner or safety in college.

“I went to junior day at Texas and the coaching staff told me they would offer me soon,” Green said. “A week later, they were true to their word and offered me. I was extremely excited. If you play football in Texas, you want a Texas offer.”

That said, getting a commitment from Green won’t be easy; he’s already said that he intends to sign with the same school that signs his twin brother, German. German Green is still waiting on an offer; he doesn’t have as much varsity tape as Gemon because he missed the 2016 season with a torn ACL.

“Some schools don’t even know Gemon has a twin brother,” German said. “It was hard to watch last year and be hurt. I guess it isn’t much fun to see some schools offer (Gemon) and not me, but we’re going to the same school in college. We’ve already decided that.”

So where does that leave Texas?

“I’m just waiting on them to offer my brother,” Gemon said.

An out-of-state defensive prospect, defensive end Miles Emery, was on campus last Saturday before he made it to Cedar Hill. Texas hasn’t offered the 6-5, 235-pound three-star prospect from Blue Valley North High School in Kansas, but he might receive one soon.

“I liked the atmosphere at Texas a lot. It was energetic and the coaches were having a lot of fun,” Emery said. “I knew I was coming to this camp, so I wanted to get to Austin if possible. They’re still talking about where I could fit and if I’ll get an offer. It’s early in the process.”

“I have a great relationship with coach (Oscar) Giles. He wants to come see me in the spring and then we’ll talk about an offer,” said Dotson, who was competing Sunday on his home turf. “He’s a real guy. He doesn’t tell you what you want to hear. He keeps it 100 with you and shoots it straight. I was in Austin for junior day and it was a great time.”

Most Texas targets competing at Sunday’s Under Armour camp play defense. The top offensive target was offensive tackle Rafiti Ghirmai. Texas was one of the first schools to offer Ghirmai and the Longhorns remain in a good spot despite new competition from programs like Alabama, Michigan, Florida and LSU.

“I hear from Texas, Alabama and LSU the most,” Ghirmai said. “I text with the offensive line coach at Texas every day and coach Herman texts me a few times a week. I’m hoping to do most of my visits in the spring and summer, but I’m throwing shot in track right now and all of those meets are on Saturday.”

Ghirmai said he plans to commit after his senior season.