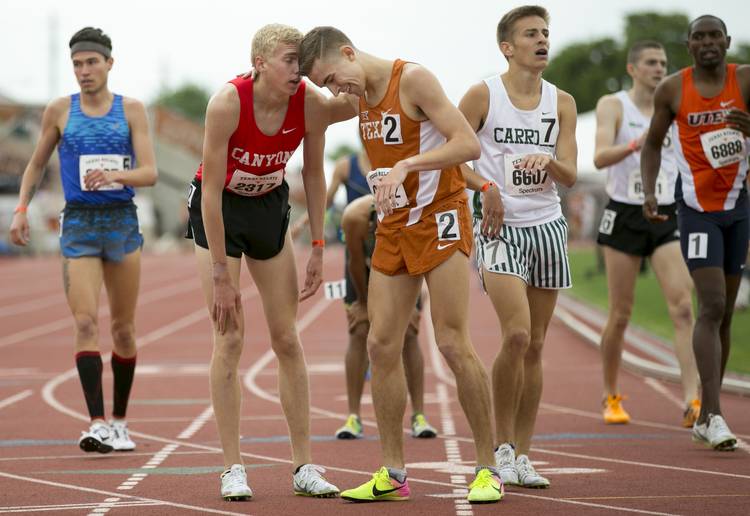 Samuel Worley, left, of Comal Canyon High is congratulated by UT's Alex Rogers after a win at the 90th Clyde Littlefield Texas Relays on April 1, 2017. Worley and Rogers will be teammates at Texas this fall. JAY JANNER / AMERICAN-STATESMAN

Paced by the present, Texas’ future outran its past on Saturday.

Samuel Worley, a senior at New Braunfels Canyon High School, earned a win in the Jerry Thompson Mile during the final day at the Texas Relays.. Running on an overcast day, Worley got within .62 seconds of becoming the first-ever Texas high school student to break a four-minute mile. Worley, who has signed to run at Texas, beat UT sophomore Alex Rogers to the finish line. Longhorn legend Leo Manzano finished third.

“Sam ran an awesome race, Leo ran a great race, Rog ran a great race,” Texas freshman John Rice said. “Just to have the past, the future and the present finishing 1-2-3 at Texas Relays is something really special.”

Led from the starting line by Rice, the field of 12 runners got off to a good start at Myers Stadium. In a move that Manzano said “shows how much heart he has,” Rice dangled a carrot for the runners for the first two laps before pulling out of the race around the 1,000-meter mark.

Worley was running in the middle of the pack after Rice’s departure, but he made up for it with a final kick. Worley felt he had something left in his tank over the final 300 meters, and he passed to the front of the line during what he called a “whirlwind” homestretch.

“Sam was in great position. When it came time to throw down, he was just the bigger man in the entire field,” Rogers said. “There’s no secret to it. He’s just a hard worker and someone that’s just admirable.”

Worley was joined by Southlake Carroll senior Reed Brown as the high school entrants in the Jerry Thompson Mile. Brown, who will run at Oregon, finished fourth with a time of 4:03.23.

Last April, Idaho runner Michael Slagowski became the ninth high schooler to break the four-minute mark. None of those runners, though, were Texans.

“It’s bittersweet like that,” Worley said. “I really wanted to be under four, but you have to be happy with the results you’re given. I put in a good effort today, so it’s just something to be proud of.”

Since Logan Emery (4:18.20) and Spencer Dodds (4:26.96) also competed in Saturday’s race, the Longhorns had four underclassmen in the field. That quartet will soon be joined by Worley on the 40 Acres, and Manzano projected that the future of Texas’ track program is bright.

Rogers also thought the Longhorns sent a message on Saturday.

“People better start taking us a little more seriously in the mid-distance,” Rogers said. “We are a young group with a lot of talent. If you count us out, we’ll come get you.”

“A lot of big athletes come out here. For me to come out here and beat most of them, that’s really good,” said Burton, who was competing in her first Texas Relays. “I’m expecting to beat other big competitors (this season).”

Texas junior Kally Long continued a career year with a seventh-place showing of 14 feet, 5.25 inches in the women’s pole vault. That vault set Long’s personal-best for the outdoor season. In January, Long established her indoor mark at 14-6.

Long is less than two months removed from a failed vault in Seattle that resulted in a concussion and chest injury. The Wimberley native returned to competing in time for last month’s NCAA’s indoor meet, where she finished 11th after a four-week layoff.

Elena Bruckner has herself a memorable first Texas Relays