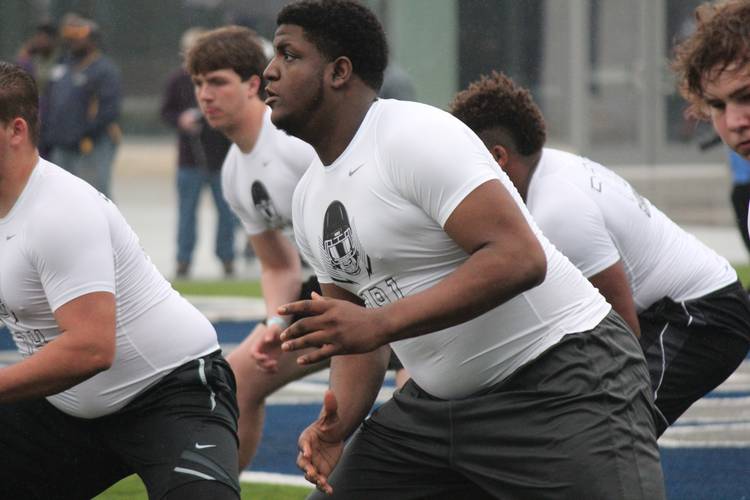 The best offensive lineman in the state lives more than 200 miles from Austin. A giant roams the halls at Northwest High School in Justin. At 6-7 and 315 pounds, Darrell Simpson is an imposing figure with a gentle nature and an odd route to football success.

“As an individual, Darrell is so mild-mannered, so sometimes it takes him a bit too long to pull the trigger,” said Northwest coach Bill Poe. “He needed to get more aggressive early in his career, and he’s gotten better with that as he’s aged. He was a starter for us at 14 turning 15. It’s part of the process of maturing.”

It was also because Simpson viewed himself as a basketball player. He stood at nearly 6-6 in middle school and already was on a traveling AAU team. Poe wanted Simpson to play football in high school, so he did what any good football coach does when he sees a viable target: Recruit.

When Poe got the Northwest job, the rumor was that Simpson would play only basketball when he got to  high school.

“I got this job his eighth-grade year and I heard about this big, huge giant at the middle school, so I went and talked to him,” Poe recalled. “With his size and athleticism from his basketball skills, I knew he had a great chance to play as a freshman. The size helps, but it was also his feet. … We wanted to keep him involved in football and around midway through his sophomore year he realized his future was in football.”

Simpson still plays basketball and helped his team reach the Class 5A state tournament his junior year. He’s currently hitting the football camp circuit; he was one of the top linemen at the recent Under Armour All-America Camp Series in Cedar Hill, and again at The Opening regional in Dallas.

He holds 22 offers from programs like Ohio State, Oklahoma, Oklahoma State, TCU and Texas A&M, but he’s the only prospect on the American-Statesman’s Fabulous 55 top-10 list who doesn’t have an offer from Texas. Simpson is ranked No. 7 on the Fab 55 and is the 10th-rated offensive tackle in the country and No. 102-ranked overall prospect in the nation on 247Sports’ composite ratings.

Simpson said he wants to make his decision after Northwest’s spring game, May 18.

And to think, he almost never touched a high school football field.

“I mean, basketball was my first love and that is where I thought my athletic future was headed,” Simpson said during the Under Armour camp. “As a young guy, it was an opportunity to be on a team outside of basketball and it went from there. Football became my priority as I grew with my team and developed those relationships.”

Simpson is entering his fourth season as a starter. He was never the small freshman other varsity players picked on. As a ninth grader, he was bigger than the seniors. Still, Simpson understands he’s grown since those early days on varsity, even if that growth doesn’t show up in his height or weight.

“Early on I was just playing catch-up,” Simpson said. “I was big, sure, but I needed to figure out how to get as strong as them and work as fast as them because in middle school, I never saw the type of talent I was now up against in practice my first year. It was a growing process for sure. I just kept at it and was surrounded by positive people who kept me going. It’s all paying off.”

Simpson’s lesson is one the modern athlete should adhere to. In a growing atmosphere of sport specialization, he’s shown that a young man can develop the skills needed to become a college athlete in one sport by playing multiple sports. It’s a trait that Poe, and most of his coaching brethren, believe in strongly.

“Simpson isn’t one of the top offensive lineman in the country because he’s just big. There are a lot of big guys. It’s his feet that separate him from most players of his size — and that comes from basketball,” Poe said. “It’s very important for young players to play multiple sports growing up. It’s scientifically proven that players who play multiple sports get injured less because they’re working different muscles throughout the year. It’s helped Darrell tremendously.”