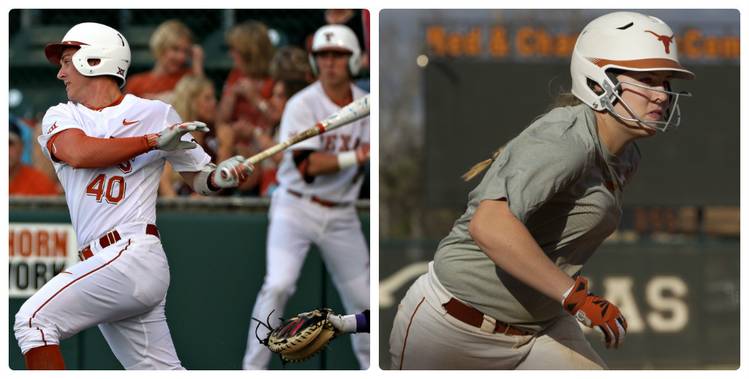 Might the Big 12’s best hitters in baseball and softball both be Texas catchers?

Sophomore Michael McCann is hitting .368 to lead the baseball team, while freshman Taylor Ellsworth boasts a .500 average in softball. Those numbers should seemingly place Ellsworth atop the Big 12’s leaders list and McCann just behind Texas Tech’s Grant Little (.382) in baseball. Neither Longhorn, though, appears on the conference’s list of statistical leaders.

Both McCann and Ellsworth are sharing playing time behind the plate this spring. Thus, neither has earned enough at-bats to qualify for the league’s batting titles. As the baseball and softball teams enter this weekend’s home series against Oklahoma, McCann has 57 at-bats, Ellsworth 56.

Time for some math.

The Big 12 determines its batting baseline in baseball by dividing a player’s at-bats by his team’s total games — and insisting that the number equals at least 2.5. In softball, that number can’t dip below 2.0. Texas’ baseball team has played 32 games (20-12), with 35 (20-15) softball games.

The NCAA, though, has a different criteria. Players from both sports must participate in 75 percent of their teams’ games to be eligible for the NCAA batting title. Baseball and softball batters must, respectively, also average 3.0 and 2.5 plate appearances per game.

Those rules explain why Binghamton’s Justin Yurchak, who’s hitting .435 with 62 at-bats while appearing in all 15 of his team’s games, and Princeton’s Marissa Reynolds, who’s hitting .489 with 45 at-bats while playing in 20 of 22 games, are top-five contenders for NCAA batting crowns. Ellsworth would rank third in the country in hitting if she was eligible.

It’s still impressive that McCann and Ellsworth, both local products from nearby Cedar Ridge and Georgetown high schools, are even in this conversation. McCann, who wasn’t even on UT’s roster last season, entered this year with 19 career at-bats to his name. And Ellsworth should be playing Rouse High School instead of Oklahoma on Friday, but she joined the Longhorns in January after enrolling at UT early this semester.

Crimson clashes: Oklahoma baseball and softball will both be in Austin this weekend for three-game series. Red River Rivalry fans should be able to schedule makeshift Texas-OU double-headers at McCombs Field and UFCU Disch-Falk Field on Friday, Saturday and Sunday. Each day, the start times for both games are separated by either 2 1/2 or three hours:

Oklahoma’s softball team, which is the defending NCAA champion, is 32-7 and ranked 11th in the country. The Sooners’ baseball team is 26-6 and is ranked 16th. Texas is unranked in both sports.

Getting ready: Byron Robinson placed second to Utah State’s AJ Boully in the men’s 400-meter hurdles at last weekend’s Texas Relays. The senior’s performance was underwhelming — a time of 49.93 seconds was more than a second off his personal best — but he wasn’t discouraged.

Friday’s competition was his first appearance in a hurdling event this spring. Primarily a sprinter during the indoor season, Robinson admitted his rhythm was still off as he readjusted to jumping. Robinson said that past experiences lead him to believe it takes two months to transition between seasons.

At last year’s Relays, Robinson tripped over a hurdle and finished 79th in a 79-man field. He was later the first to cross the finish line in the showcase’s invitational event, but he exited the weekend with times of 68.45 and 50.48 seconds.

The Dotted Line: Quarterback updates, plus Texas’ odds with the Fab 55’s top 10