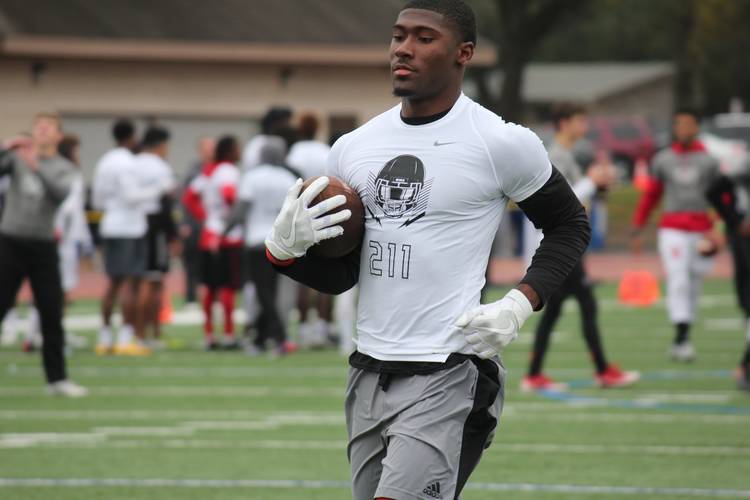 Al’Vonte Woodard is out to prove Houston Lamar is more than DB High.

The school is known for producing defensive backs, so Woodard — a four-star wide receiver — is tested every day in practice. And he wins his share of battles.

“Our secondary this past year was the best one I’ve ever faced,” Woodard said. “Those guys on the other side of the ball, like Anthony Cook and D’Shawn Jamison, make me a better football player. We all like to compete. It makes the games easier.”

Woodard’s competitive streak led him to the camp circuit. The 6-1, 193-pound prospect, the No. 13-ranked overall prospect in the state on the American-Statesman’s Fabulous 55, began to gain confidence as he faced more competition. As a sophomore, he recorded 25 catches for 503 yards and five touchdowns. He improved on his play-making ability in the offseason and scored 14 touchdowns and gained 792 yards on 35 receptions as a junior.

“I found out how good I could be my sophomore year,” he said. “I always thought I was one of the best athletes on my team, but I wasn’t sure I’d be a college prospect or anything like that until I did well as a sophomore and started going to camps. At those camps, I realized I was as good as the other wide receivers ranked real high. I made improvements from my sophomore year to my junior year and I’ll do the same for my senior season.”

The three are close. In fact, Woodard played youth football with Preston from the kindergarten to the sixth grade.

“The three of us have a healthy competition,” Woodard said. “I’ve known Jalen for most of my life and we’ve stayed close. He’s a top-rated wide receiver, but he can throw the ball. We were one of the only flag football teams throwing it back then.

“We met Brennan through camps and we’ve all stayed close. It’s a friendly competition. We hang out outside of football, but we all want to be the best and that makes us go hard in each rep.”

The summer is normally when high school students relax. Not Woodard. The 16-year-old isn’t planning summer trips for fun, though it’s likely he’ll enjoy himself. He wants to decide before his senior season begins, meaning he has only a precious few months to gather all the information he can before deciding on his future.

“These next few months are critical for me and my future. I need to know as much as possible about the schools and get to know the wide receiver coach at each of my top 10 schools,” Woodard explained. “I want to know how they’ll develop me for the NFL. I don’t want it to be about me during the season, so I want the decision behind me.”

“Man, he’s one of the coolest coaches in football,” Woodard said. “He’s a down-to-earth guy and he cares about more than football when we talk. We talk almost every day. I’m really liking Texas.”

That’s good news for Longhorns fans. Landing the Lamar trio of Woodard, Cook and Jamison would be a victory for Tom Herman and his staff. The Houston ties help. Woodard, and his teammates, are well-versed in Herman’s philosophy and accomplishments. Woodard also would reunite with former Lamar teammates Holton Hill and John Bonney.

Continuing the pipeline from Lamar to Texas is discussed between the group, as is playing for the same school, in general.

“We talk about it all almost every day,” Woodard said. “We’ve played a lot of football together and have a lot of the same offers, so it is something we talk about. But as the time goes and we learn more about the process, we know it is about what is best for each of us. We’re all trying to get to the pros and we need to pick the best route, even if that’s different.”