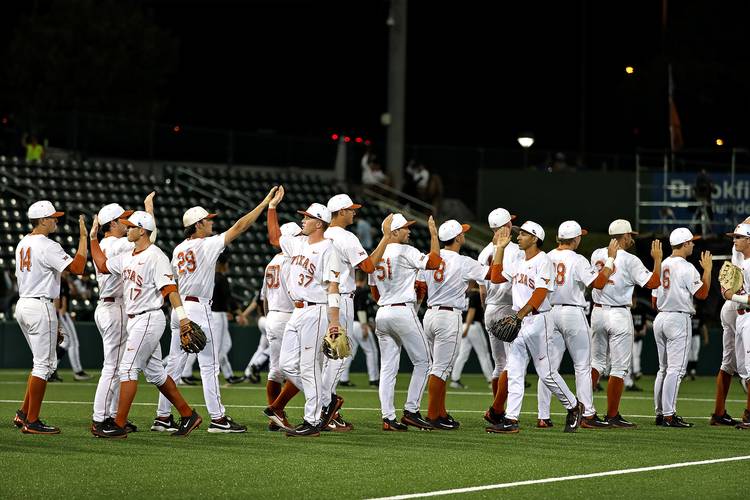 On Friday night, Texas stranded 13 runners on base.

Yet Texas still opened a three-game series against rival Oklahoma with a 5-3 win. The Longhorns (21-12) evened their conference record at 5-5 with the triumph at UFCU Disch-Falk Field. Ranked 16th in D1baseball.com’s poll, Oklahoma (26-7) is 4-3 in Big 12 play.

“OU is always going to be a big game,” sophomore pitcher Nolan Kingham said. “Just happy that we came out on top, and we’ve got to get them tomorrow.”

The right-handed Kingham was the pitcher of record for Texas. Kingham allowed two runs, and he used two of his five strikeouts to end the seventh inning. He improved to 5-2 with the victory.

Kingham, though, said he didn’t have his best stuff against the Sooners. He had never before issued four walks in his collegiate career, and Oklahoma got within a hit of the Las Vegas native’s season high. Texas pulled Kingham in the eighth inning after Oklahoma opened the frame with Steele Walker’s solo homer and Brylie Ware’s single.

“Anyone can throw good when all their stuff is working,” Kingham said. “Last couple of starts, I haven’t had really anything, but I’m just trying to go as long as I can in the game. It’s been doing all right for me.”

On Friday, Kingham was backed by a defense that he lavished with plenty of praise. Second baseman Bret Boswell and shortstop David Hamilton combined for nine defensive assists, and the duo turned Texas’ 33rd double play. Freshman Austin Todd made a diving catch in center field. Catcher Michael Cantu caught the only Sooner who attempted to steal a base.

Texas entered the weekend with a .984 fielding percentage that ranked third in the NCAA. The Longhorns did not commit an error Friday.

“I thought our defense was exceptional again,” UT coach David Pierce said. “I’m just so proud of the way that they’re playing defense with such anticipation and awareness and wanting the baseball hit to them. That’s a big part of their mentality and their pride right now.”

Texas struck out 10 times against Oklahoma starter Dylan Grove, but the Longhorns pushed across four unearned runs during the first three innings. The Horns collected eight hits against the Sooners. Only one of those hits — Todd’s third-inning single — plated a run. In addition to Todd’s single, UT scored on three sacrifice flies and Oklahoma’s botched rundown of Tate Shaw at home.

Rounding the bases: Travis Jones was hit by two pitches Friday, and the junior outfielder has been plunked by nine pitches this year. … Oklahoma homered twice. Texas has surrendered eight multihomer games this year. … On Saturday, Texas junior Morgan Cooper (3-2, 1.44 ERA) will face off against Oklahoma sophomore Jake Irvin (5-0, 1.16) in a battle of right-handers. … Kyler Murray, an outfielder and quarterback at Oklahoma, will return to Norman on Saturday for the football team’s spring game. Murray went 0 for 4 from the leadoff spot in Friday’s loss, and the freshman will rejoin his baseball teammates Sunday.