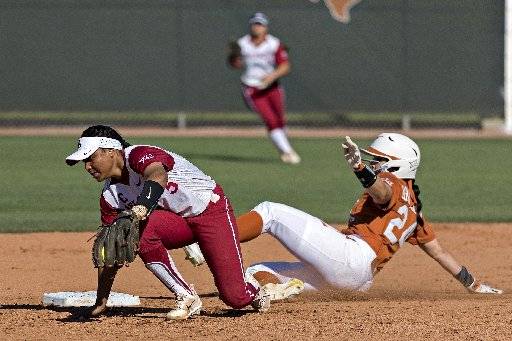 The Texas softball team continued to be haunted by its one-run demons Friday afternoon against No. 11 Oklahoma.

Shay Knighten hit the go-ahead RBI single in the sixth inning to give the Sooners a 3-2 win at McCombs Field.

The Longhorns entered the Red River Showdown with a 4-8 record in one-run games this season, and each of their previous six losses came by a lone score.

Texas coach Connie Clark said that despite the tough luck in close games, her team is still focused on shoring up small mistakes.

“It’s not something we really talk about,” she said. “You can’t control the outcome, so you have to just keep being great at the process and make that consistent.”

The Sooners (33-7, 4-0 Big 12) took the lead in their first at-bat. After two leadoff singles, Fale Aviu singled to right field to score Nicole Mendez. Texas starting pitcher Erica Wright settled down after that, inducing a popup bunt and a strikeout to prevent any more damage.

The Longhorns (20-16, 0-4) rallied in the home half of the third. Tuesday DerMargosian singled to start the inning and advanced to second on a stolen base. She scored three hitters later when Devon Tunning laced a sharp grounder past the second baseman to tie the game. Kelli Hanzel later scored on a passed ball to give Texas the 2-1 lead.

“If that inning would have never happened, it probably could have gone downhill,” DerMargosian said.

But that lead was short-lived. Knighten responded in the next half-inning with a line drive that ricocheted off the left-field foul pole for her second home run of the year.

“That definitely was not the spot I was supposed to hit,” Wright said. “I just had to refocus and get to the next pitch.”

The Longhorns mustered just two hits against Oklahoma’s Paige Parker (13-5), who struck out six in a complete-game effort.

Wright (4-4) picked up the loss, allowing all three runs on seven hits with three strikeouts.

The Sooners have now won seven straight in the rivalry series. The teams will meet again Saturday at 1 p.m. and Sunday at noon.