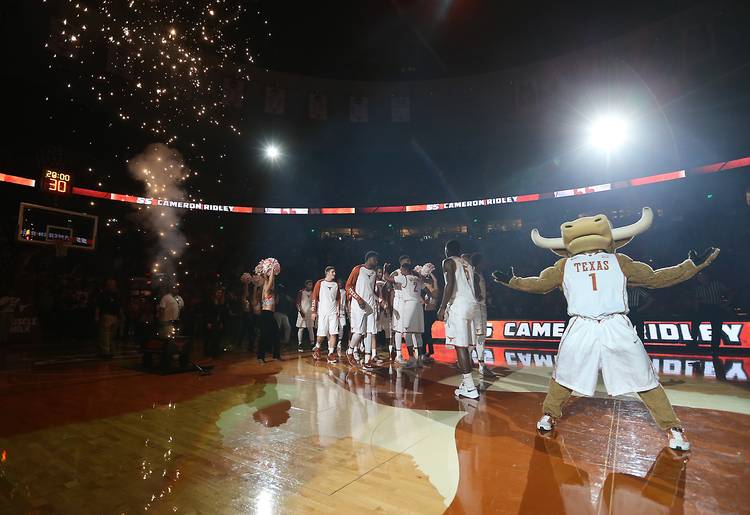 Friday’s pronouncement that Texas will probably build a new multipurpose arena in the parking lot just south of Mike A. Myers Stadium and Soccer Field should make every Longhorn bolt upright and summon laserlike focus.

Now, arguably more than ever, it’s time for Texas to start acting like Texas again — from an organizational standpoint and on the scoreboard, too.

A project of this magnitude is one that will shape legacies and perceptions for decades to come. Texas isn’t just building a new basketball arena, no. This is a massive undertaking that will come to symbolize whether UT officials value their own brand, the importance of athletics, the collegiate experience and the university’s role in the Austin community for the second half of the 21st century.

The pressure now mounts on UT President Gregory L. Fenves, who unveiled his plans Friday at a university development board meeting. Unfortunately in today’s society, few will credit Fenves if UT builds a world-class medical school on his watch. But they’ll never forgive him if the school botches the basketball arena construction.

Friday’s announcement wasn’t a total surprise, really. The American-Statesman first reported in February 2015 that the parking lot south of Mike A. Myers Stadium was a leading candidate, according to UT sources. The school has kept all options open.

“Absent any other options, I want to build a basketball arena on that site south of Mike Myers Stadium,” Fenves told the Statesman in June 2016.

There are far too many unanswered questions at this point; it’s still too early in the process. All that’s known is UT must demolish the 39-year-old Erwin Center to make way for Dell Medical School expansion. UT officials can’t even pinpoint when the new arena will be open, only speculating that it could be four years away.

How big should the arena be?

Many believe the Erwin Center’s current 16,540-seat configuration is too big. The arena’s circular seating bowl winds up pulling fans away from the action. Just standing on the concourse level feels miles away.

The straight-upward feel of Kansas’ Allen Fieldhouse (capacity 16,300) and Oklahoma State’s Gallagher-Iba Arena (13,611) creates the illusion that fans are sitting right on top of the action. Noise comes pouring down onto the floor.

Texas Tech opened the 15,000-seat United Supermarkets Arena in 1999, and the Red Raiders have regretted that size ever since.

Longtime Tech athletic director Gerald Myers openly wished the school could push down the roof and eliminate about 2,000 to 3,000 seats. No amount of sold-out George Strait or Elton John concerts in Lubbock can hide the fact that the arena’s upper deck is usually empty for 30 men’s and women’s basketball games each year.

The Longhorns would look small with a 10,000-seat venue. But 16,000 might be too big. Remember, this facility must hold UT commencement ceremonies, concerts and other events, too. And it needs luxury suites, a club level for donors and the other accouterments normally associated with a top-shelf venue.

Who should pay for it?

There’s a strong argument to be made that UT should go it alone with financing and turn its back on any government help. Former athletic director Steve Patterson poisoned the well in September 2014 when he said the city — i.e., taxpayers — should help with the cost of a $500 million arena.

The Erwin Center opened in 1977 after an initial cost of $34 million. Another $55 million was spent on renovations.

“The reality is that Austin has had a free arena for 3½ decades at no investment whatsoever,” Patterson said. After those comments, Patterson was crushed politically by many on and off campus. Also, some on campus believe the overall cost would come in well below a half-billion.

UT could do what it has done for years: issue municipal debt. The university system has a pristine AAA rating due its state backing, according to Moody’s and S&P. A UT bond with a 10-year maturity had a tax-free yield of 2.33 percent as of Friday’s trade, according to Bloomberg.

Or the university could follow the path set by Baylor and TCU during their major construction projects. Baylor offered “Founder’s Suites” to major donors who contributed significant sums to the construction of McLane Stadium. TCU did something similar, and now Frogs athletic director Chris Del Conte boasts about the school’s balance sheet. “No debt, baby! None,” he says.

The Longhorns have serviced and carried debt for years after bond issuance financed Royal-Memorial Stadium expansion. The athletic department is required to make an $18.3 million principal and interest payment during the 2017 fiscal year, according to audited figures obtained by the Statesman.

What should it be called?

In 2010, Louisville officials wanted to land a 20-year, $40 million deal for the naming rights to what is essentially a downtown, NBA-ready venue. Yum Brands eventually signed a 10-year deal worth $1.35 million annually — far less than the asking price.

Closer to home, billionaire Tilman Fertitta gave Houston officials $20 million for renovations to the Cougars’ basketball facilities. Fertitta also serves as the chairman of the UH System Board of Regents. The $60 million facility will be called the Fertitta Center.

Should Texas take money from a single Austin-based company? Or should it put a single donor’s name on the place? It’s unlikely that a new arena will be named after someone like Frank Erwin, a once-powerful but combative UT System regent. The Wallace Hall Center, anyone?

When Fenves first took the president’s job in June 2015, the longtime administrator admitted to knowing little about college athletics. Since then, he’s been front and center for Big 12 Conference alignment talks and changing football coaches, and he now regularly tweets out final scores and congratulatory messages after big wins.

Fenves never really took much external criticism for the botched handling of the new tennis center. An underground utility problem stalled the project, not that many noticed. Many, many more eyes will be watching this.

With a new arena on the drawing board, Fenves will also face internal pressure to hire a permanent athletic director. Houston lawyer Mike Perrin was hired in September 2015 to smooth  the choppy waters created by Patterson. “The water is calm now,” said a major booster with close ties to top UT administrators.

Men’s coach Shaka Smart and women’s coach Karen Aston should be far more concerned about winning basketball games than a new arena, although UT’s practice facility, Cooley Pavilion, will be demolished as part of the medical school expansion, too. It’s unknown whether UT will build underground practice gyms or erect a new facility elsewhere.

And oddly enough, this will put pressure on football coach Tom Herman, too.

Football drives everything on campus, and the program has been in a funk this entire decade. If Herman can get the Longhorns winning again, then suddenly everything gets easier. Officials aren’t as tense. Donations suddenly come pouring in. Winning, as everyone knows, cures everything.

The path to a new arena is long. No firm answers will be coming this week or this spring, either.

What starts here changes the world, according to UT’s advertising. The activity involving a parking lot adjacent to Red River Street has only just begun.