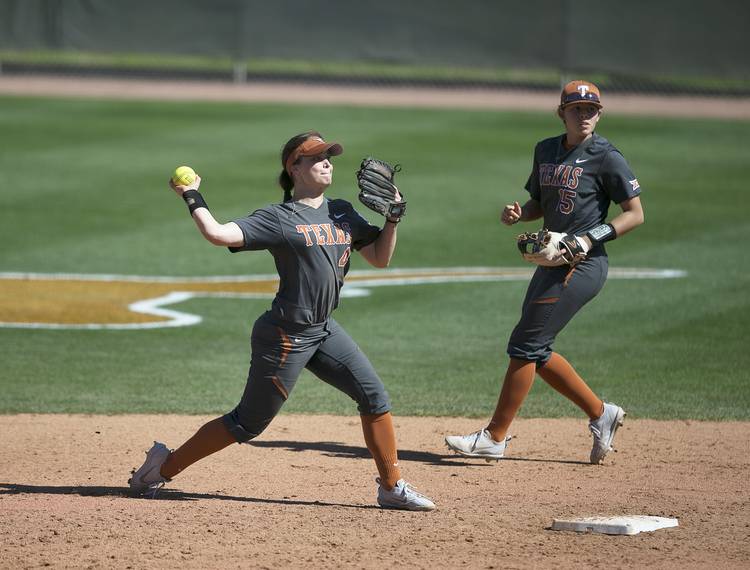 Texas' Devon Tunning (seen in a recent game) made a diving catch with the bases loaded to prevent a big inning by the Sooners on Saturday. DEBORAH CANNON/AMERICAN-STATESMAN

For the second straight game, the Texas softball team struggled at the plate against No. 11 Oklahoma.

The Longhorns managed only two hits in a 3-1 loss to the Sooners on Saturday afternoon at McCombs Field.

“I thought we had a good game plan and a pretty good approach,” Texas coach Connie Clark said. “We really just could not string anything together.”

With two outs, right fielder Kaitlyn Washington doubled to the left-field gap to end the no-hit bid. First baseman Kelli Hanzel followed with a single up the middle to score the Longhorns’ only run of the day.

“We’re hitting the ball hard,” Hanzel said. “For the first couple of innings, we were hitting balls right at people. We’re just trying to figure out how to get those to drop.”

Texas starting pitcher Tiarra Davis (4-8) limited the damage to one run but struggled with consistency throughout the game. She threw 63 of her 120 pitches for strikes and allowed four walks in five innings.

Shay Knighten hit a two-run double in the fifth that proved to be the difference. The damage could have been worse, but shortstop Devon Tunning made a diving over-the-shoulder catch in shallow left field to leave the bases loaded. The Sooners stranded 11 runners in the game.

“We’re right there every time in ballgames,” Davis said. “We’re just coming up a little short.”

The Longhorns threatened in the final inning. Left fielder Tuesday DerMargosian reached on error and advanced to third on second baseman Kaitlyn Slack’s single. But Washington grounded into a 4-6-3 double play to give Oklahoma its ninth straight win in the rivalry.

Texas fell to 20-17 and 0-5 in conference play with the loss. The Longhorns haven’t had a worse Big 12 start since opening 0-7 in 2004. They will look to avoid the sweep Sunday afternoon.