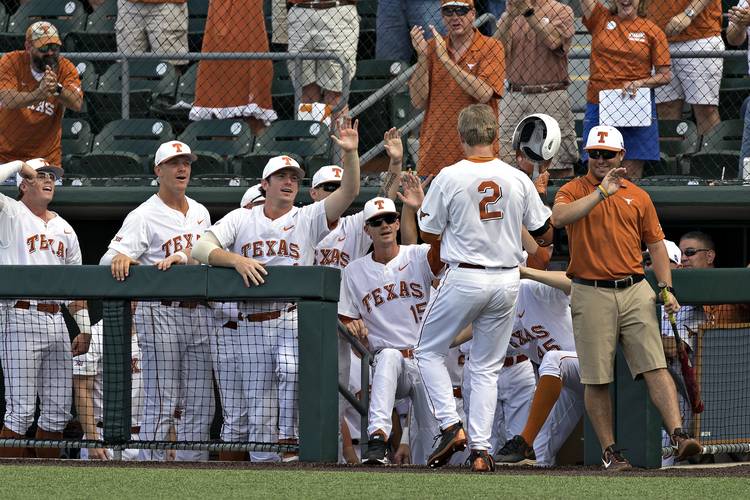 The sons of a Longhorn legend, Kacy and Kody Clemens, each had a moment in the Red River Rivalry on Saturday.

Both of Roger’s kids hit home runs, and Texas crawled out of an early hole in a 9-3 win over Oklahoma.

The victory at UFCU Disch-Falk Field — combined with a 5-3 conquest on Friday — gives Texas a win in its 2017 series with the Sooners. On Sunday, Texas will go for its first sweep of Oklahoma since 2014.

“It’s something, obviously, we’re going to talk to our kids about when we’re 50,” said Kacy Clemens, the Longhorns’ first baseman. “It’s definitely a special moment. It’s something that not a lot of kids get to do, and we’re just cherishing it to the fullest.”

The Longhorns rebounded quickly, however. Kody Clemens singled in a run in the bottom of the first, and his younger brother homered in the third.

Texas broke that 2-2 tie in the fifth inning when Tate Shaw ricocheted a ball off the foot of Sooner reliever Ryan Madden, which allowed David Hamilton to score from third base. Travis Jones walked in the ensuing at-bat, loading the bases and setting the stage for Kacy Clemens. On a 2-1 offering from Madden, Clemens hammered his first collegiate grand slam over the right field fence.

Fun fact: Kacy and Kody Clemens have now homered in the same game on two different occasions. On April 8… 2016 and 2017. #HookEm pic.twitter.com/uXJ6piE8g7

April 8, by the way, appears to be a good day for the Clemens family.

Before Saturday’s six-run win, Kacy and Kody — a senior and a sophomore on the Texas roster — had homered in the same game once. That happened during a 6-3 win at Kansas State on April 8, 2016. One year later, the brothers accomplished the same feat.

“We kind of just chase each other, and it’s a good time,” said Kody Clemens, who joked that he consistently complains to his brother for keeping his distance in a career home run derby that Kacy leads 12-9. “Hopefully, we can keep doing that and keep hitting home runs.”

Kacy Clemens’ grand slam was the hugest highlight of a fifth inning that began with two Texas outs. Six straight Longhorns reached base after that second out, and five of those players scored. Clemens’ first-inning single was also a two-out knock.

Scoring the most it had against Oklahoma since a 10-8 extra-inning win in 2014, Texas left its pitching staff with more than enough run support. Morgan Cooper, a right-handed junior whose 1.44 ERA going into the game ranked third in the Big 12,  went 6 2/3 innings, allowing five hits and three runs.  Seven strikeouts also gave Cooper his fifth straight performance with that many befuddlings of batters.

“He always goes up there and gives us a chance to win,” Kody Clemens said. “He’s a really good starter, and he kept us in the game for sure.”

Rounding the bases: Clemens’ grand slam was Texas’ second of the season. Before Shaw cleared the bases on March 28, the Longhorns had not hit a grand slam since 2012. … Playing in front of an announced crowd of 6,603, Texas won its seventh straight game at home. … Five days after a five-inning appearance against Sam Houston State, junior Kyle Johnston will be Texas’ Sunday starter against the Sooners. … Oklahoma starter Jake Irvin was pulled with two outs in the fourth inning with an apparent injury. Pitching for the first time since March 17, Irvin (5-0, 1.30 ERA) allowed an earned run and four hits on Saturday.