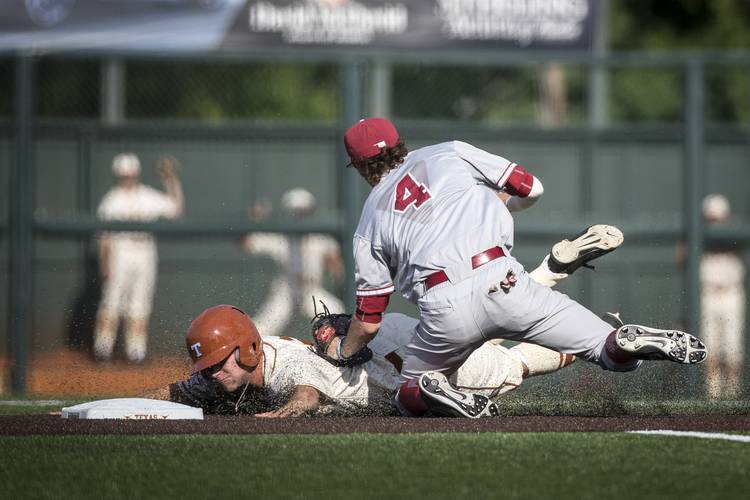 UT's Tyler Rand gets tagged out at second base in the ninth inning during the Longhorns' 2-1 loss to Oklahoma on Sunday at UFCU Disch-Falk Field. TAMIR KALIFA/AMERICAN-STATESMAN

Instead of a sweep, Texas will just have to settle for a series victory in this year’s installment of the Red River Rivalry.

Texas struggled on offense, and Oklahoma earned a 2-1 win at UFCU Disch-Falk Field on Sunday. The loss stalled a seven-game winning streak in Austin for the Longhorns (22-13, 6-6 Big 12). Oklahoma (27-8, 5-4), the 16th-ranked team in the D1baseball.com poll, salvaged its weekend with the victory.

After 5-3 and 9-3 wins this weekend, Texas was looking for its first sweep of Oklahoma since 2014.

“It’s just when you get to those first two wins and you do have the opportunity (to sweep), it’s a little frustrating that you don’t finish the job,” Texas coach David Pierce said before analyzing that it was “a good weekend for us.”

Oklahoma trailed for much of the game’s first half, but the Sooners found enough offense in the sixth and seventh innings. Sooner senior Renae Martinez tied the game in the sixth on a run-producing single, and Ben Hollas later contributed an RBI double. Steele Walker and Kyle Mendenhall — the two Oklahoma runners who crossed home plate — were walked and hit by a pitch before their scores.

Texas was limited to a sacrifice fly in the first inning by Kacy Clemens, who was later ejected by plate umpire David Wiley for arguing a strikeout. The Texas offense had five hits but stranded seven runners on base. (Pinch-runner Tyler Rand was also thrown out on a miscalculated attempt to take second base during the ninth inning).

An offense that was 2 for 12 with runners aboard spoiled a solid start by junior pitcher Kyle Johnston, who had a no-decision after allowing three hits over six innings. Johnson was throwing five days after a five-inning start in which he yielded one hit and one run in an 8-1 win over Sam Houston State. This week, the right-hander from Flower Mound struck out eight while walking seven.

Freshman Blair Henley had been the starter in five of Texas’ six Sunday games this season, but he made his first appearance out of the bullpen on Saturday. (Henley is 2-3 with a 4.35 ERA.) The shake-up of the rotation put Johnston back in the conversation for those Sunday starts.

“His stuff was good,” Pierce said. “Occasionally, he got around the ball, but for the most part, he really pitched down in the zone. He pitched well when he had some stress.”

With the loss at home, Texas dropped to 18-7 at UFCU Disch-Falk Field. Texas has 10 home contests left on its schedule, but three games against West Virginia at the end of the regular season are the only meaningful dates on the calendar. Road trips to Baylor, Oklahoma State and TCU remain on the Longhorns’ itinerary.

“I think that we all know we’re a great team,” junior outfielder Travis Jones said. “We’ve just got to go and out-compete the opponent.”

Rounding the bases: By rule, the ejected Clemens, who is hitting .322 while leading Texas in home runs (six) and RBIs (28), must sit out Texas’ next game. The Longhorns will host Texas State on Tuesday. … Due to his abbreviated appearance, Clemens failed to reach base for the first time in 22 games. … An announced crowd of 5,580 was in attendance Sunday. … Oklahoma sophomore reliever Connor Berry picked up the victory after he limited Texas to one hit over the final 3 1/3 innings.