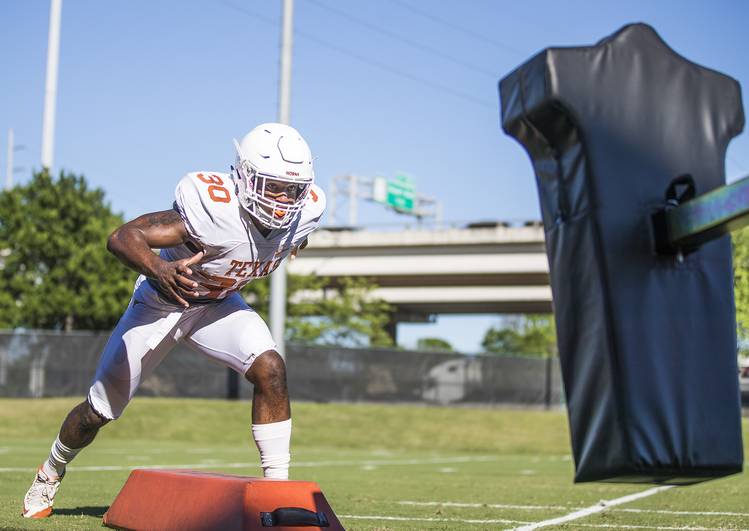 Texas running back Toneil Carter works out on March 30, 2017. RICARDO B. BRAZZIELL/AMERICAN-STATESMAN

Tristian Houston and Toneil Carter will get a chance to prove themselves this weekend.

Texas football coach Tom Herman told reporters following Tuesday’s spring practice that running back Kyle Porter was dealing with an ankle sprain. Porter, who rushed for 205 yards his freshman year, is not expected to play in Saturday’s Orange-White scrimmage. Chris Warren III will also miss the game with a hamstring injury.

The injuries to Warren and Porter — the two most-veteran players in Texas’ backfield — leaves Houston and Carter as the only scholarship running backs who’ll participate in the spring game.

Houston has logged three carries over his two years in Austin, one of which was a redshirt season. Carter, meanwhile, is an early enrollee from Houston Langham Creek. In addition to inexperience, both Carter and Houston have struggled this spring with ball security.

Herman said it was his philosophy to give spring game snaps to walk-on players, so rising juniors Trenton Hafley and Tim Yoder should find some playing time Saturday. Herman recognized both players in front of their teammates following Tuesday’s workout.

Joining Porter on Tuesday’s injury report were tight end Andrew Beck and defensive back Davante Davis. A separated shoulder will sideline Davis this weekend, but Herman did not expect the injury to be a serious issue. Beck will see a specialist on Thursday after he re-injured a foot that has been bothered the senior-to-be throughout the spring.

Expanding the map: Herman revealed the plans for Texas’ satellite camps this summer. The Longhorns will host four camps in Austin, the first of which will be held in late May. Texas also plans to be involved with satellite camps in Los Angeles, Phoenix, the Florida coast, southern Louisiana and the Atlanta and Las Vegas areas.

Herman explained that Texas can be associated with 10 satellite camps. He said the prospect of having each of those camps in Austin “waters it down,” but “we’re not going to waste them either.”

By putting camps across the map, Texas can market its brand and see players outside of its recruiting radius. The thought of Texas going after out-of-state recruits rankled some of the state’s high school coaches during Charlie Strong’s tenure, but Herman reassured his preference for in-state prospects.

“If we can sign an entire class of national championship-caliber players that are from the state of Texas, we’re going to do that,” he said.

Pee test: Yes, Texas does care about the color of its players’ urine.

Went to take a leak in Moncrief and this was hanging above the toilet. Tom Herman's attention to detail is real 😳 pic.twitter.com/FoAMbkf56K

Earlier on Tuesday, OrangeBloods.com reporter Anwar Richardson noticed a color-coding chart for urine in a restroom at the Moncrief Athletic Center. In an effort to monitor hydration, Herman confirmed that his players’ pee is indeed tested at each practice. He also said that Tuesday was the first day that each of his players had been properly hydrated.

“Being hydrated around here is not something silly,” Herman said. “It’s something we take very, very seriously, because it’s a huge part of injury prevention.”