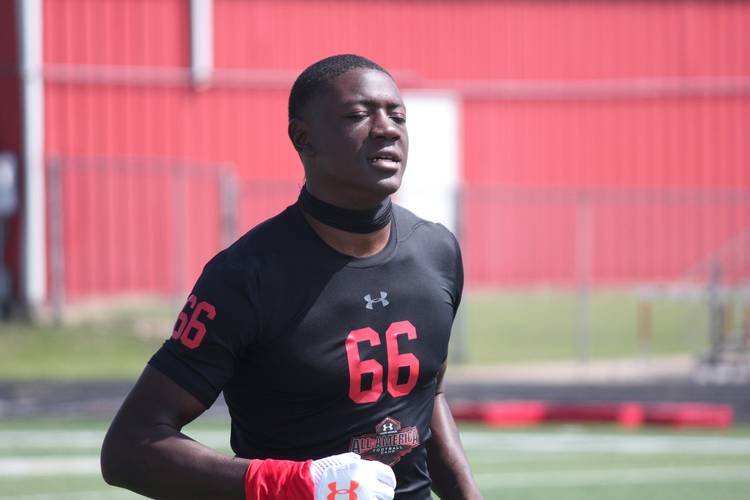 Love at first sight applies to more than dating. Fort Worth Eastern Hills linebacker Byron Hobbs fell in love with Texas on his first visit, taking in the campus and the program on Feb. 25 for Texas’ junior day. He committed to the Longhorns six weeks later, joining Florida athlete Justin Watkins last Friday as the first two Texas pledges for the 2018 class.

“Texas was the place I wanted to go and I couldn’t wait any longer to become part of the program in an official way,” Hobbs said. “The first time I visited on junior day, I fell in love immediately. I knew then that is where I wanted to go. I loved the school, but I also love defensive coordinator Todd Orlando and coach (Tom) Herman.”

Hobbs left junior day as a Texas lean, yet he wasn’t expected to commit this early in the cycle. He spoke at The Opening and Under Armour All-America Camp Series about taking his time and doing research on the schools chasing his talents. But his second visit to Texas for last month’s UT scrimmage solidified his feelings.

“Coach Orlando is going to get the defense right,” Hobbs said. “He’s a high-intensity coach and so is the rest of the staff. They treat the practices like a game. He’s intense and I love him as a coach and a person.”

The three-star linebacker feels the same about Herman and the direction of the entire program.

“It’s the honesty the coaches show you at Texas that makes them a little different than some other schools,” he said. “I know what they brought to Houston and they’re going to bring that same success to Texas. Herman wants to win a national championship, and I believe that will get accomplished.”

Texas earned Hobbs’ trust. Some programs throw an offer at every top-flight player in the nation and hope that a few stick. Not Texas. The Longhorns are being selective when handing out offers, and prospects are noticing.

“It makes an offer from Texas special,” Hobbs explained. “You know the Texas coaching staff wants you if they offer because they’re only offering three or four linebackers, or three cornerbacks. There are schools that offer and they won’t even let a player commit to that offer. You know where you stand with Texas.”

Eastern Hills isn’t known for producing blue-chip athletes or even playoff success. That kept the 6-4, 205-pound linebacker off most recruiting radars until the end of his junior season. Throughout camp season, he’s impressed alongside the four- and five-star talents from the Dallas area.

He picked up his first offer in the middle of January from Oklahoma State, and things fell into place after that, Hobbs said.

“I had to work to be recognized because I’m not at a school that scouts come visit all the time or anything like that,” Hobbs said. “I knew I belonged. I need to improve because the talent level will be much different at Texas, but I kept working and knew colleges would find me if I played well.”

Hobbs will play the Rover linebacker position for the Longhorns. He gave a quick summary of the new position in the UT scheme.

“Coach Orlando wants his Rover to be able to rush off the edge like Von Miller and then be able to drop into coverage like a Kam Chancellor. It’s a versatile position that lets you do everything,” he said. “We’re going to pressure the quarterback. I know I’m long and can get off the edge to attack the passer. And I’ve also showed I can cover in space. I think it is a great position for me in the future.”

The future begins now for Texas. Herman must win in year one and the Longhorns’ 2018 class must rank higher than the class of 2017, which at 26th was Texas’ lowest-ranked class since the turn of the century.

Hobbs is the only 2018 pledge from Texas, but he sees that changing soon.

“I don’t feel a bunch of pressure to recruit guys right now because I know we have more commitments coming down the pipeline,” Hobbs said. “I won’t name names, but I know of a few guys who are going to commit and I think the 2018 class will be special. We’ll win a national championship at Texas.”