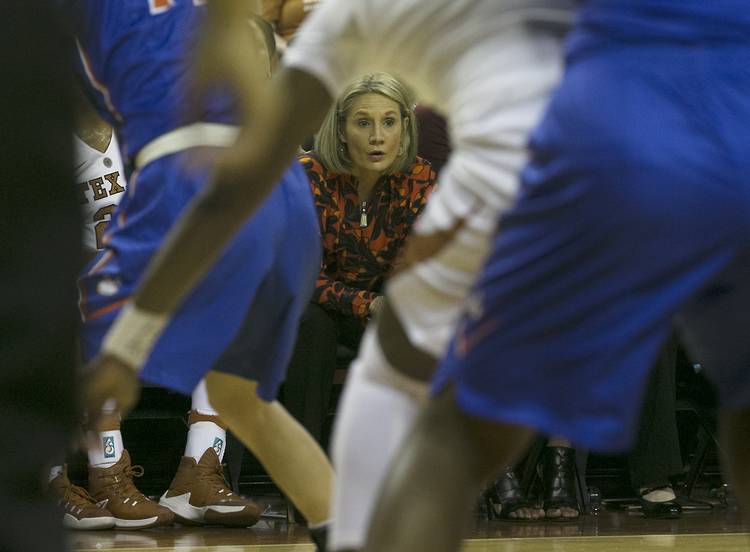 Karen Aston is certain that her basketball team has the players, coaching staff and tradition to make a run at a Big 12 championship. An NCAA title is in her vision, too. When those milestones become realities is the only question.

Aston, who just completed her fifth season as Texas’ women’s coach, has been building the Longhorns. With nine McDonald’s All-Americans expected to be on the roster when the season opens this fall, the hope is that championships will come sooner, not later.

On Tuesday, Aston spoke about a variety of topics, from Texas’ disappointing loss to Stanford in the Sweet 16 to her thoughts on the decision where to build UT’s new basketball arena:

What do you think about the journey your players took this season?

It was a process for them to learn about the level you have to play on a daily basis. Reflecting back, we didn’t reach two of our main goals — one of them was winning the (Big 12). But we’re heading in the correct direction. It came down to a shot or two. We’ve won more than 50 games in our last two years. We had a really nice high with the 19-game winning streak. Even the lows weren’t that low because we learned some lessons in those games.

Reaching the Final Four was a goal too, correct?

Only one team in NCAA basketball is happy at the end of the season. The rest of us are trying to get to that place.

We’re in a good place when you consider we’re even talking about Final Fours. When we set goals at the beginning of the year, they weren’t the same goals we set when we first got here (in 2012). We had simple goals. Now we’re having a conversation about the Final Four.

Where does Texas stand now?

I think Brooke (McCarty) said it best after the North Carolina State game (in the second round of the NCAA Tournament): Making it to the Sweet 16 should be an expectation at Texas. It should be a standard. … I understand the journey, the process it takes to become a yearly contender.

What do you think about South Carolina’s run to become an NCAA champion?

Dawn Staley’s season and the evolution of South Carolina is a great example for any coach who is willing to put their time in and willing to go through the ups and downs of a season. She stayed with the process. Any coach who wants to reach a championship level has to understand the process and has to be patient for it.

What do you know about coach Staley’s journey?

When I coached at Charlotte we would play her teams every year. That was during her first four or five years there. I remember beating them in the NIT. … She’s in her 11th year at South Carolina and they clearly are a championship team. Even though I’m an impatient person — and I know the fans at Texas have high expectations — I have to remain patient with the steps that have to be taken.

Name something about your team you hope improves next season.

One of our weaknesses was our perimeter shooting. Maybe grinding out a bucket in the paint was a problem at times. We have to find an answer for replacing (6-5 senior post) Kelsey Lang and (5-9 forward) Brianna Taylor, our best defender. I think we will find those answers. (South Carolina transfer) Jatarie White will add a dimension in the paint that we just didn’t have at times. Can someone just get me a bucket down low?

They will both provide us with perimeter shooting. That should open up some things for the other players. What I’m most excited about is the mindset our players have today. They’re a hungry team. They don’t look like a group that’s just going to sit around, waiting for July to begin gearing up for next year.

Do you sense next year’s team will be different?

It’s a different feeling than we had last summer. We’ll see some returning players who will look a little different too. Our shooting is the obvious thing.

What do you expect from the freshmen?

Chasity is pretty legit on what she brings to the table. One of our needs was finding a three-point shooter. She’s labeled as a point guard — and she is — but we recruited her for her shooting ability. Knowing we have Brooke and Sug (Alecia Sutton) back, we now have a three-headed monster that we can move like chess pieces and can shoot the ball better.

Boothe was the MVP of the McDonald’s All-America Game. Is that an indication of how talented she is?

Sometimes you have to take those games with a grain of salt, but Rellah is a scorer and I wouldn’t label her at any position. She’s very much like Joyner (Holmes). She has the ability to stretch the floor. There will be a learning process for both freshmen, but they can shoot.

There were times near the end of the season when McCarty couldn’t get off a shot. What needs to happen for her to have more openings?

The progression of Sug Sutton will be enormous for us. As you could see late in the season, it looked like the light bulb was coming on. She has the best moments of the year in post-season play. She will free up Brooke the way Celina (Rodrigo) did the year before. … For Sug, you know what they say about players coming off ACL injuries? It takes a year for you to become what you were.

With nine McDonald’s All-Americans on next season’s roster, will this be your best team?

I don’t mean to say this in a negative way, but those titles and such get erased once you get to college. If we mature like I think we can and if the newcomers buy into the process this summer of how much work it takes to be a championship team, we have the ability to be as well-rounded as we’ve been at every position since I’ve been here.

Was it good that UConn was beaten at the Final Four?

They’re playing here next season (in January) so I’m not going to say I’m happy they lost the championship in Dallas. … I don’t want to say this gives everyone hope. UConn just signed a beaucoup of players. They only graduated one or two seniors. They will reload the way they always do, but it was good for our game to have a new champion.

UT announced last week that a new on-campus arena is now in the works. Your thoughts?

It’s always sad to think that the Erwin Center isn’t going to be here anymore. It’s such an iconic building. … But it’s always fun to turn a new page at some point. Having an on-campus arena with all the things that come with it is exciting, though. I was thrilled last Friday when president (Greg) Fenves was moving forward with it. When you have a vision, it’s a little easier to talk about.