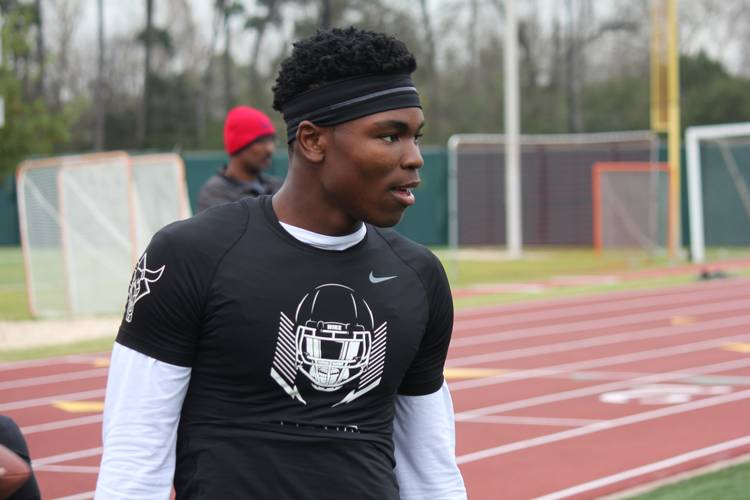 Saturday marks the unofficial beginning of Tom Herman’s tenure as Texas’ head coach. He’s been at the helm since the end of 2016, but the Orange-White scrimmage offers fans and recruits a chance to witness the direction of the program under Herman, even if the play calling is expected to be vanilla and key members of the 2017 team are sitting out with injuries.

More than just what happens in the scrimmage, Herman and his staff are presented with a chance to impress the next generation of stars. The visitors’ list for Saturday is still growing, but here are five offensive and defensive prospects with Texas offers, including a few Fabulous 55 members, expected to attend Saturday’s scrimmage.

The latest: Thompson is set to announce his college decision Thursday at 1:30 p.m. and the Longhorns appear to be the leader. He’s familiar with Texas despite growing up in a Sooners family — his father is former Oklahoma star Charles Thompson, and his brother Kendal was an OU receiver before transferring to Utah; he now plays for the Washington Redskins. He wants to be a part of the Red River Rivalry. Oklahoma, though, already holds a commitment from four-star quarterback Cameron Rising. Rising is a pro-style quarterback while Thompson is equally capable of beating defenses with his arm and his legs. Thompson seems perfectly suited to run a Tom Herman/Tim Beck offense, and he’ll likely show up at Royal-Memorial Stadium on Saturday as the third member of the Longhorns’ 2018 class, joining Florida wide receiver Justin Watkins and Fort Worth Eastern Hills outside linebacker Byron Hobbs.

It's official☑️ After a long process.. the time is now! See y'all then.. #G2G🙏🏽 pic.twitter.com/ii67mDraOM

The latest: Many in the industry feel Woodard is the best wide receiver in this class. He ranks No. 13 overall on the Fab 55, placing him third among 2018 receivers behind Jalen Preston (No. 5) and Brennan Eagles (No. 12). It is no secret that Woodard likes Herman, the staff and the Texas program. He said recently that he wants to gather information over the next few months before deciding prior to his senior season, but a decision could happen sooner if he locks in on a school. That’s good news for Texas because the Longhorns should be considered the leader. Houston Lamar is home to multiple UT targets for 2018. Anthony Cook, the No. 1-rated player in the class and a cornerback at Lamar, visited Texas last weekend and maintains the Longhorns will remain among his top schools. Fellow cornerback and Lamar standout, D’Shawn Jamison, also holds a UT offer and also is expected in Austin on Saturday.

The latest: There are three receivers in the state battling out for the No. 1 spot for the position. Eagles, along with Al’Vonte Woodard and Jalen Preston, are clearly the state’s top three wide for the 2018 cycle. Eagles and Woodard are expected on campus Saturday. The Longhorns are climbing up Eagles’ list after starting behind some other programs. The No. 12-ranked player on the Fab 55 was impressed during his visit to campus on junior day and has remained in daily contact with the Texas staff. Eagles is a well-respected player in the Houston area among fellow recruits; if Texas can grab his commitment, it might lead to other players following suit.

The latest: Few players’ stock rose quicker this offseason than Ghirmai’s. He went from relative obscurity to having 30 big-time offers in a matter of months. Texas offered him earlier than most Power 5 programs, which figures to help the Longhorns. Ghirmai says he talks to the Texas staff daily and visited Austin for junior day. Getting him back on campus for the spring game was important for the Longhorns since programs like Alabama, Georgia, Florida, LSU and Michigan are hotly after the 6-5 tackle prospect. He announced his top 10 on March 20 and Texas was included. He’s the top offensive tackle target for the Longhorns in the state.

The latest: Texas wants more than Ghirmai at offensive tackle. Moore, who plays tight end in high school and was an all-district selection as a junior, was identified as a potential tackle prospect by numerous programs across the country. Texas offered on  Feb. 7 and Moore’s offer list has grown to 16, including a recent offer from Oklahoma State. Moore’s frame can easily add the weight necessary to become a college offensive tackle. Current Longhorns starter Connor Williams had a similar build as a prep athlete.

The latest: Texas is in great shape for Foster, one of two five-stars in the state this cycle. He suffered a knee injury during his junior season and it has forced him out of camps this offseason. A history of injuries is the only real concern for Foster — he also missed games as a sophomore. Still, he comes from a school known for producing Longhorns and is a can’t-miss athlete with NFL potential. At this point, it feels like Foster’s commitment to Texas is a matter of when and not if. After missing out on every top 10 member of the Fabulous 55 in 2017, Foster would guarantee the Longhorns a headliner in the 2018 class.

Best one by far🔥 pic.twitter.com/xLT1NcAkrB

The latest: Jamison is another Houston-area player who’s high on the Longhorns. He’s teammates with Woodard and Cook, two of UT’s top targets in the 2018 class. Jamison is as talented as Cook, but doesn’t quite have the length or height for five-star status. It doesn’t take away from his ability as a player. Jamison is quicker, faster and stronger than Cook, who is a consensus five-star. Charlie Strong’s staff coveted length when recruiting cornerbacks. Herman’s won’t be as married to the need for length. Jamison can play outside or slot cornerback and even spent time at safety during his prep career. Texas leads entering the weekend.

The latest: Texas made up ground with O’Neal during his visit to Austin for junior day. He’s a hard-hitting safety with an infectious personality. He’s an alpha male and that becomes clear in camp settings because O’Neal backs down from no challenge. He’s improving as a coverage player, but his specialty is knocking heads. The Longhorns want two or three safeties in 2018. Foster is target No. 1. O’Neal is becoming target No. 2. The two would complement each other well as the back-pair of a secondary and expect the Longhorns to drive that point home on Saturday. Arp’s DeMarvion Overshown is another safety Texas would take in the class despite what O’Neal and Foster decide.

The latest: Texas’ depth at defensive end isn’t strong. There are quality players at the top of the board, but there’s a steep drop after the top three or four edge rushers in the state. This forces the Longhorns to look across the borders and Herman’s staff identified an early target in Tatum. Defensive coordinator Todd Orlando prefers an odd-man front, meaning big-bodied defensive ends who can rush the passer and take on double-teams is a premium in recruiting. Tatum fits those categories, but it’ll be tough to get him out of Oklahoma.

The latest: One of the in-state edge rushers Texas does covet is Ossai. The problem for the Longhorns is that Ossai grew up a diehard Texas A&M fan. He holds an offer from the Aggies and it’d be an upset if the four-star pass rusher didn’t eventually end up in College Station. Texas did get him on campus for junior day and a return trip to watch Saturday’s spring game gives the Texas staff hope that Ossai isn’t yet leaning towards A&M.

Shaka Smart gets his point guard, but Texas is still chasing Mo Bamba