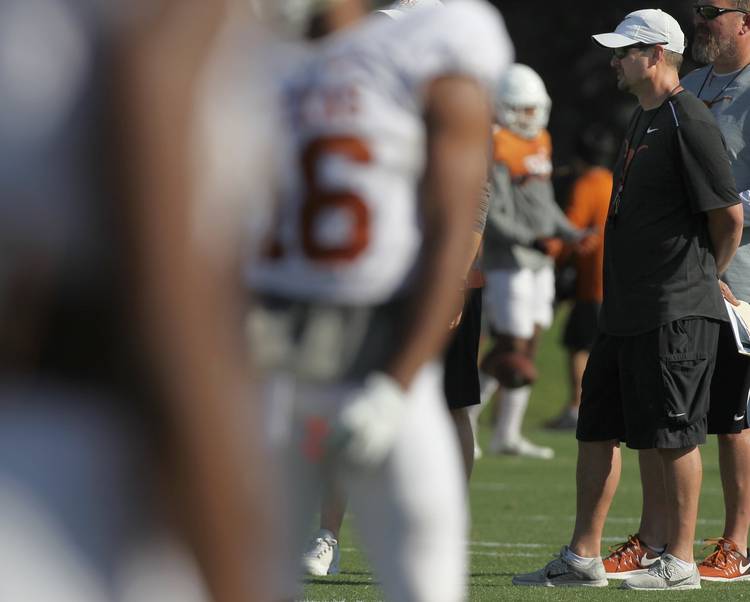 1. Who will have the look of a starting quarterback?

Before spring drills, Tom Herman said he wasn’t going to name a starter until the team resumes practicing in August. A week ago, though, offensive coordinator Tim Beck indicated that Shane Buechele may have the upper hand on Sam Ehlinger. Buechele, after all, threw for 2,958 yards and 21 touchdowns as a freshman. Ehlinger is three months into his first semester of college, but the four-star recruit from Westlake has the dual-threat capabilities that have been associated with Herman’s offensive stylings. Walk-on Josh Covey will appear as Texas’ third-string option on Saturday, but most attention will be paid to the battle between Buechele and Ehlinger.

2. Which wide receiver will catch the coaching staff’s attention?

In addition from separating themselves from Texas defensive backs, Longhorns receivers also will need to pull away from their own fellow pass-catchers.  Texas is set to return 169 of last year’s 241 team receptions, so that leaves a plethora of receivers vying for playing time. New position coach Drew Mehringer’s arsenal of pass-catchers features veterans (Armanti Foreman, Dorian Leonard, John Burt and Lorenzo Joe), up-and-comers (Collin Johnson, Devin Duvernay and Lil’Jordan Humphrey) and redshirt freshmen (Reggie Hemphill-Mapps and Davion Curtis). And don’t forget about Jerrod Heard, the ex-quarterback who had 24 catches and three touchdowns in his first year as a receiver.

Texas surrendered 31.5 points per game in 2016, the second-worst showing in school history. Not that last season was an aberration. (Texas allowed 28.4 points per game under Charlie Strong, who won two national championship as a defensive coordinator at Florida). New defensive coordinator Todd Orlando has arrived with a multiple-look playbook, and he inherited plenty of experience on his defensive front, linebacking corps and secondary. It won’t be easy to judge the projection of the defense based on a scrimmage in April, but don’t think that the media and fans won’t try.

4. How will the Texas fans react to the new regime?

During the 2016 season, Texas drew 102,315 fans for its sold-out season-opener against Notre Dame and boasted attendance numbers that were enviable to most schools. The team, though, lost seven of its 12 games and fired a well-liked coach. Herman has Texas ties, and he had said and tweeted all of the right things since his hire in late November. So are the fans re-energized or in wait-and-see mode? A measuring stick of fans’ enthusiasm may be the look of the crowd for Saturday’s free event since an estimation of the crowd for last year’s spring game didn’t exceed 10,000.

Longhorns will be ‘vanilla,’ but Texas hopes to show growth in spring game