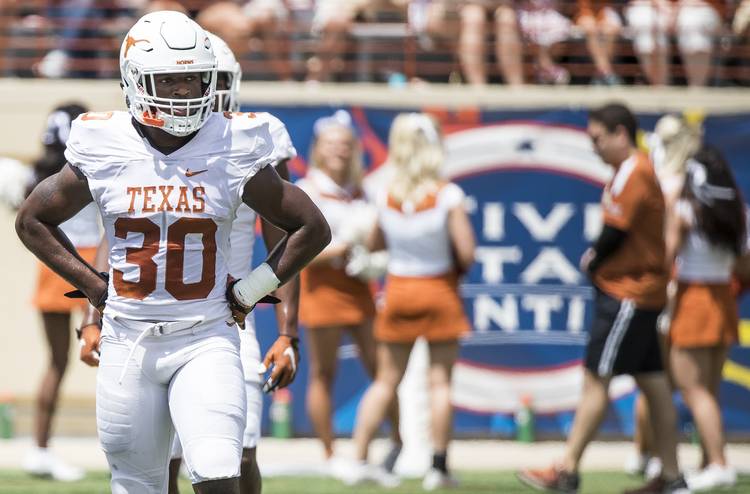 How some specific Longhorns looked Saturday during the Orange-White scrimmage:

Shane Buechele, QB: Last season’s starter looked like he’s going to be next season’s starter. He was 23 of 39 for 369 yards and produced three touchdowns, a pair of throws to Collin Johnson and a short keeper on a draw play. Granted, he ran the No. 1 offense against the No. 2 defense. But he certainly passed the eye test.

Sam Ehlinger, QB: The mid-term enrollee from Westlake looked like he’s 15 practices into his college career. Still, he flashed an occasional good pass, nice play or smart decision. His final numbers weren’t good — 10 of 31 for 148 yards and a touchdown — going up against the No. 1 defense.

Malik Jefferson, LB: Junior college signee Gary Johnson hasn’t arrived yet, and Jefferson spent Saturday playing inside linebacker, not outside. He made two big plays, including a nice stuff of Toneil Carter at the goal line on the final play of the day. Still, those were the only two plays he was credited with in the final stats: One tackle, one quarterback hurry.

Poona Ford, DT: This was a hype vs. reality day for Ford, who was praised this spring by coaches. He wasn’t the star of the day for the defensive line — fellow tackle Chris Nelson was — but he didn’t disappoint, either. Ford looked active in there. He finished with four tackles and a sack.

Toneil Carter, RB: Saturday was an opportunity day for the mid-term enrollee; with Chris Warren III and Kyle Porter both out with injuries, the running back spotlight was virtually his alone. His final numbers were OK — he averaged six yards a carry, finishing with 60 yards on 10 attempts, and had two catches for 9 yards — but did seem to have some freshman flash. He has good size and showed some quickness and had good hands coming out of the backfield. There also was a fumble and the goal-line stuff by Jefferson, and he ran the wrong route on a busted play.

Connor Williams, LT: Texas’ top lineman had a good day. It started with a one-on-one battle with Ford in a pre-scrimmage circle drills; Williams went 1-0-1 in their heavyweight head-to-head. He was steady throughout, though Jeffrey McCulloch did beat him with a nifty spin move to sack Buechele.

Joshua Rowland, K: The stat sheet will say he was 3 of 4 on field goals and converted every point-after kick he had. And that’s all true. But you couldn’t call any of his three makes (36, 27, 31) line-drive, nailed-it-through-the-uprights kicks. He missed a 49-yarder to the left. Right before that 31-yarder, which came with the score tied late 48-48, Herman called a time out, trying to ice him.

Others who stood out: John Bonney and Donovan Duvernay led the team in tackles, with six; redshirt freshman cornerback Chris Brown had an interception and five tackles; Nelson had two sacks, three hurries and two pass knockdowns; Reggie Hemphill-Mapps had five catches for 84 yards.