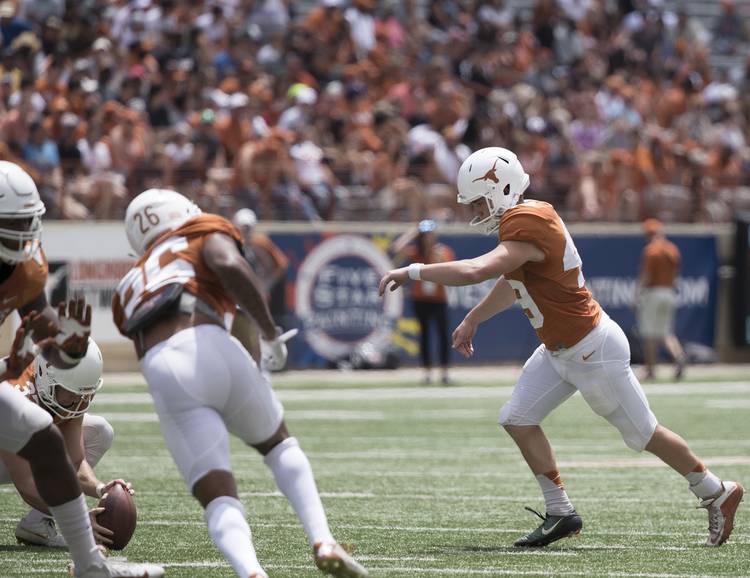 One of three early enrollees in the Longhorns’ locker room, kicker Joshua Rowland made his debut at Texas’ spring game.

Rowland was successful on three of his four field-goal attempts Saturday. He was good from 36, 28 and 31 yards, and that last kick came after Texas coach Tom Herman iced him with a timeout in a situational drill. Working with deep snapper Jak Holbrook and holder Michael Dickson, the rising junior’s only miss was from 49 yards.

“The kicking game? It’s fine,” said Herman, who added that the Longhorns work more on punting than kicking. “There’s kids they pull out of the stands that can make a field goal (or) PAT with nobody rushing and the game’s not on the line. We put them in as adverse situations as possible throughout the course of practice, but you never know.”

Only time will tell how Rowland responds on more pressure-packed plays. Former kicker Trent Domingue missed crucial kicks in three-point losses at Kansas and Kansas State last fall, and a blocked try didn’t help in a 24-20 loss to West Virginia. Rowland was signed in February after he booted 25 field goals in two seasons at Mississippi Gulf Coast Community College.

Situational Shane: Texas staged a couple of two-minute drives for quarterback Shane Buechele, and the sophomore-to-be led the first-team offense to points on both possessions.

With 1:50 to work with in the first half, Buechele engineered a six-play scoring drive starting from his own 30 that featured three pass completions, two rushes and a sack. Two of his throws were directed at Collin Johnson, who beat teammate Eric Cuffee for a 17-yard gain and a 29-yard touchdown.

Toward the end of the scrimmage, the offense was given the football at its 36 with 80 seconds to go. Buechele went only 3 for 6 on that drive, but a 37-yard pass to Jerrod Heard set up a 31-yard kick for Rowland.

“We’ve had a little bit of success doing some of that through spring, so it wasn’t surprising,” offensive coordinator Tim Beck said.

The first-string defense shut down a Sam Ehlinger-guided offense during its two last-minute drills. Ehlinger, a freshman from Westlake High School who enrolled early, went 0 for 6 with a sack in those situations.

Linebacker Breckyn Hager entered the weekend with a shoulder injury and was limited to one series. Texas, though, did not need to update its injury report after the spring game. In fact, the first words out of Herman’s mouth during his postgame press conference were “excited that we came out of it injury-free. That’s fairly unusual for a spring game.”

Betancourt teamed with fellow student Mitchell Doerr to best DBU products Aaron Ross and Michael Griffin in an obstacle course. He then went after an ex-receiver, beating Marquise Goodwin in a catching contest. Not to get it twisted, Betancourt was aided by Griffin slipping during his run and a bad throw to Goodwin. A win is a win, though.

Orange-White scrimmage: How did these specific Longhorns look?