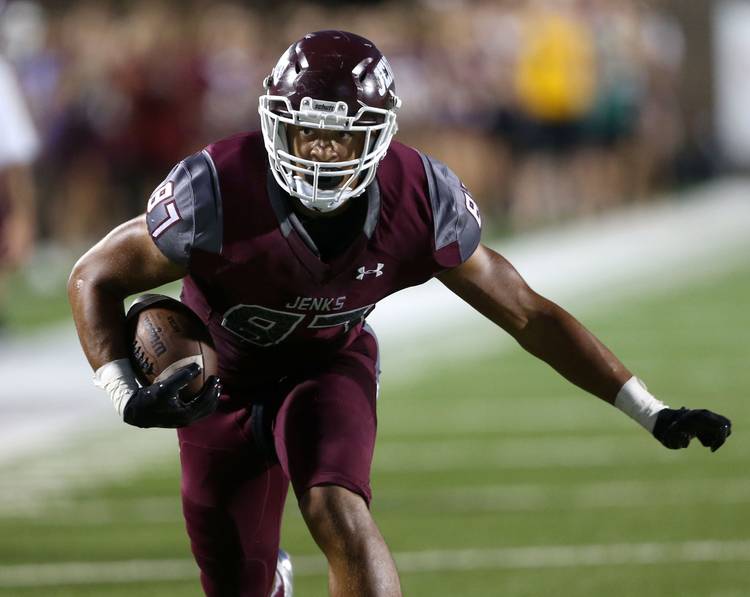 JENKS, Okla. — With 15 spring practices now behind him, Texas coach Tom Herman rattled off his list of concerns last Saturday and said, “We don’t have a tight end right now.”

The Longhorns were anxious to get Reese Leitao enrolled in June. With a 6-4 frame, he was an all-state, two-way player at Jenks, one of the biggest high school football programs in Oklahoma.

Leitao had just one English class to finish this semester, and then the 18-year-old would come to Austin. His future was incredibly bright as a UT signee, possibly even as a starter this fall.

Instead, Leitao has become someone who every parent and every student virtually everywhere should know about for all the wrong reasons. His tale is that of how things can go so horribly wrong with one or two bad decisions.

“Reese stood for a lot of things that we really want to get out of our kids,” legendary Jenks coach Allan Trimble said. “It was just a big disappointment. Just a shocker, really. We had no idea.”

Shock might be an understatement in this community just south of Tulsa. Why Leitao had 20 Xanax pills — 19 of them hidden in his underwear — and $1,289 in his wallet and another $20 in his backpack is still unknown at this point. The arrest affidavit states, “it was determined that Reese was actively selling the Xanax for money.”

A preliminary hearing scheduled for Tuesday was pushed back to May 23. At this point, there is no way to predict when anyone will have final resolution.

According to Oklahoma statute, anyone convicted of drug distribution near a school could receive a minimum of four years in prison and a $40,000 fine — two times the normal punishment. Leitao wouldn’t be eligible for parole until serving 85 percent of his punishment.

“I don’t know all the legalities, but if he has to carry the tag of a felon …,” Trimble said as his voice trailed off. “I’m not saying he shouldn’t have to pay a penalty for making mistakes and breaking the law. But man, it seems like for just a few days and a few bad decisions, it could make it a bigger hill to climb for such a talented young man.”

On advice from his attorney, Leitao declined an interview request. Leitao and his mother, Joyce, were the only family members in court on Tuesday. Leitao’s father, Dave, is the head basketball coach at DePaul. Reese Leitao has two other brothers, David III and Tyson.

If Tulsa attorney Allen Smallwood can get Leitao’s charge dropped to a misdemeanor, then the athlete will probably still be accepted into UT. The University of Texas has no written policy barring the enrollment of a student with a felony conviction, according to school spokesman Gary Susswein. But administration and athletic officials say privately that UT cannot allow a convicted felon to join the football program.

Asked Tuesday if a lower penalty was possible, Smallwood said, “It would be a rarity for that to happen. That’s the goal. But the University of Texas’ goal is to go 12-0 this year. Probably not going to happen.”

An initial mid-morning meeting with prosecutors on Tuesday didn’t go well, if Smallwood’s tone was any indication. Letters were written to the court on Leitao’s behalf. Smallwood, a former president of the Oklahoma Bar Association, is one of the best in the state. But that can’t change the facts facing Tulsa County prosecutors.

“(Leitao’s) problem is what does (the district attorney) do to the public defender who comes to him with a Mexican kid from the barrio who gets charged with the same thing?” Smallwood said. “Doesn’t have the brains, the background or the family. Why does he deserve a deal somebody else doesn’t deserve? That’s the issue.

“We’re not there yet, to be quite frank with you.”

Jason Smith, the police chief for the Jenks school system, said parents were thankful for how the situation was handled. “He was treated like any other person,” Smith said.

“We’re shocked in that as adults we see the amazing possibilities that are before this young man, and these poor decisions may have an effect on that. I think that’s what the shock is,” he added. “It’s not a disappointment in him. It is a disappointment in the systematic way of what he had in front of him and how this may affect that.”

Prosecutors appear to have their case locked and loaded. Four campus police officers, two school administrators and a lab criminologist are listed as witnesses for the state.

Life as a Longhorn seems like paradise compared to the hell this family is trapped in now.

“He’s extremely stressed. He’s extremely guilt-ridden,” Smallwood said. “He knows that he has disappointed everybody who has ever been on his side. He’s just doing everything he can to convince people that if given the opportunity, he’ll make amends.”

Texas signee Reese Leitao court date pushed back to May 23

Bases loaded, no outs? No problem for Texas — again — in 2-0 shutout victory