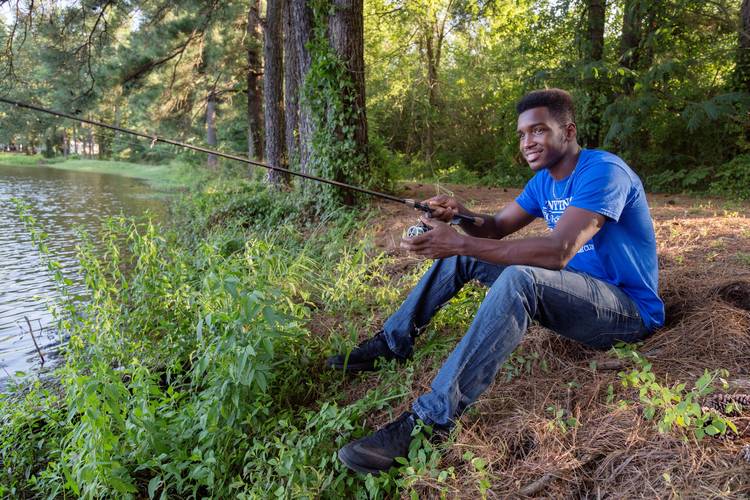 Hooks athlete Montrell Estell poses for a portrait Thursday, July 7, 2016 at a family friend's house. Estell says that patience is important in both fishing and football. "You've got to wait for the play to start in football and in fishing you have to wait for the right fish to go by." (Joshua Boucher /Texarkana Gazette)

HOOKS — College recruiters and the clergy have similar pursuits, really. Both want you to join their flock. This map dot about 15 minutes west of Texarkana has only 2,769 people, according to the city limits sign, yet He’s everywhere.

The First Assembly of God marquee encourages you to “Count your blessings, not your problems.”

Drive another quarter-mile, and the First United Methodist Church states, “Jesus gave his life, give him an hour.”

Another quarter-mile, Jesus the Light of the World simply states, “God bless Hooks.”

With one stop light and one Dairy Queen, Heisman Trophy winner Billy Sims’ hometown is as country as ever. That’s just fine with Montrell Estell, the fourth in a line of 10 brothers and sisters. Maybe he’ll come back here someday, maybe not. But Estell, a four-star prospect who signed with Texas in February, is itching to bring his versatile athleticism and fishing pole to Austin.

Estell, who’s been fishing since elementary school, loves to catch crappie. An instrumental angler on the Hooks FFA bass fishing team — yes, that’s a real thing — would go casting every day if he could. The Longhorns just hope they’ve reeled in a signee that can be a game-changing safety.

“How’d we lose to Kansas?” Estell asked. “I had a bass tournament that Saturday, so I was getting bits and pieces of it. But I saw the final score.”

If Estell could ride that 4-wheeler all the way down the interstate, that’d be fine. He’d zoom all over the defensive backfield for the Longhorns if he could, too.

“There’s not a lot to him. He’s simple. He’s a country boy,” said Estell’s father, Raydell. “He’s got his buddies where, if they’re not riding 4-wheelers, they’re going to fish.”

Hooks coach Chris Birdwell jokes that opposing coaches have nicknamed the place “Estell U.” Three of Raydell’s boys were two-way starters last season. Montrell was a safety and receiver. Fellow senior Malik was a middle linebacker and running back. Marquiz, a freshman, played inside linebacker and receiver.

They’ve all got competition from Marena, the starting pitcher for the state’s No. 3-ranked Class 3A softball team. Should anyone get hurt, their mother Christen has some pull as a rehab nurse in Texarkana.

Hooks had eight seniors on the team last year, and four are moving on to play college football. But Montrell is the one headed for the big stage with the Longhorns. Scout tabbed him the state’s fourth best athlete last season after piling up 1,503 total yards and 20 touchdowns (15 rushing, five receiving).

“My 16th year, he’s probably the best athlete I’ve coached, just in terms of all-around athlete,” said Birdwell, a Hooks native himself. “He’s had to do so much for us. Sometimes you don’t get to see it because his tongue is hanging out.”

Now, in terms of best athlete ever to emerge from Hooks, that has to be Sims, the 1978 Heisman Trophy winner after leading the nation in rushing at Oklahoma. Sims was a St. Louis native who moved to Hooks in the eighth grade to live with his grandmother.

Jeremiah Trotter logged 147 games as a linebacker during 11 seasons in the NFL, the majority with the Eagles. Wilbert Brown played three seasons as an offensive lineman.

Today, photos of all three players hang high atop the Hooks weight room, a no-frills facility that likely hasn’t changed much in decades.

Estell has all the confidence needed to get his photo added to that wall someday. Asked point-blank why he’s any better than current UT safeties DeShon Elliott or Brandon Jones, he smiled and said, “The truth? I’m faster and I can hit.”

Neither Elliott nor Jones should take that as an insult, since that was certainly not Estell’s intent. Those veterans should welcome a confident youngster into the room. Ever since Estell received his offseason workout plan from the UT coaching staff, “It’s like the Bible now,” his father said.

Kansas was the first team to offer Estell a scholarship, two years ago. That made him play harder. By the end of the recruiting process, he was awestruck to get an offer from Alabama. Michigan, Notre Dame, Texas A&M and Arizona State wanted him too. Still, he has been a UT fan for as long as he can remember, so it was Texas.

He committed to former coach Charlie Strong in May 2016, never wavered despite the coaching change and was happy to hear from Tom Herman in late November.

Estell actually thought about going to A&M. He even took a visit down there, but “It wasn’t for me.” Estell attended UT’s junior day and, as Birdwell said, “Ever since then, it’s been Texas or bust.”

Should football ever go bust, Estell may actually want to try competitive bass fishing. It’s true. But for the moment, this country boy is casting his lot with the Longhorns.

“Small town, big dreams can come true,” Raydell Estell said. “He’s been a Texas fan his whole life. He’s going to live out that dream, even out of Hooks. No matter where you are, it can still happen. Work ethic. Work hard. Don’t give up on your dreams, I guess.”

Editor’s note: This is the first of a series of looks at Texas’ 2017 signing class, as we reach out to the recruits themselves across Texas, Oklahoma and Florida to get a sense of just what the Longhorns are getting.