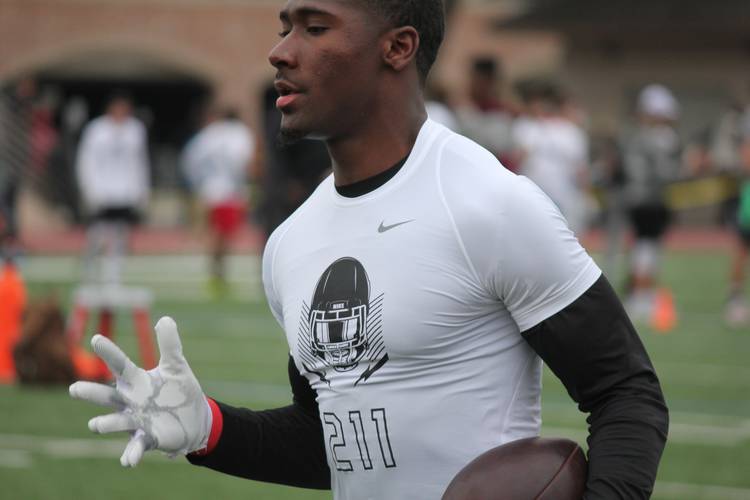 The class is sure to grow soon as the spring evaluation period heats up around the state and beyond. Tom Herman’s staff hasn’t been bashful with offers outside of the state in certain positions where the in-state talent is down. Still, the bulk of Texas’ recruiting will take place within the borders. With the Orange-White Game and junior day in the rearview mirror, the top priorities are beginning to become clear.

Here’s a position-by-position look at where Texas stands. New names are likely to pop up over the next few weeks since coaching staffs can go watch prep practices around the nation.

Update: Texas landed its leader of the 2018 class when Oklahoma product Casey Thompson pledged to the Longhorns over North Carolina. Recruiting classes can’t start until a top-flight quarterback is in the fold and Thompson’s commitment should lead to more recruits, especially on the offense, committing to Texas during the spring and summer. Thompson is a dual-threat quarterback who fits the mold of a Tom Herman/Tim Beck quarterback. The Longhorns might want a second quarterback in the class. If Herman decides an extra scholarship is available, expect the second commit to come from a player who doesn’t currently hold an offer; it’s rare for two four- or five-star quarterbacks to commit to the same school in the same class. It’s also possible Texas closes shop at the prep ranks for the 2018 class and focuses on a JUCO or graduate transfer to help with future depth.

Update: It appears to be Ingram or bust within the state for the Longhorns. Ingram, a four-star running back from Carthage, is the lone in-state back holding a Longhorns offer. Texas recently offered out-of-state prospects like Joiner, Dixon and Thomas. Joiner is expected to visit Texas, but Ingram is still the most likely of the players with an offer to end up a Longhorn. Ingram’s ability to catch out of the backfield suits Herman’s offense. It’s a down year within the state for running backs, so if Ingram goes elsewhere, expect the 2018 running back commit(s) to play prep football elsewhere.

Update: The wide receiver position is stacked with talent and the Longhorns should garner commitments from three or four, maybe even five. Watkins flipped from Florida State during his junior day visit and the Longhorns are in good shape for Woodard, one of three Houston Lamar products with an offer, and for Brennan Eagles, who is ranked No. 12 on the Fabulous 55. Texas also made impressions on Crawford and Waddle, both potential slot receivers, during the Orange-White Game.

Update: It’s clear Herman wants to improve the tight end position. That makes the 2018 class an important one for a position that was largely ignored by the previous staff in their last few classes. Herman moved quickly to gain commitments from Cade Brewer and Reese Leitao to close the 2017 class, but with Leitao’s future in doubt due to legal issues, Texas might need at least two more tight ends. The state of Texas is home to two four-star talents in Epps and Muhammad. Epps, a former Alabama commit, is becoming the top priority at the position with Muhammad seemingly headed to Michigan or Clemson. JUCO talent Dominick Wood-Anderson was offered by Texas on April 7. The 6-5, 245-pound three-star is the No. 1-ranked JUCO tight end in the country and is considered an Alabama lean. Cuero’s Bralen Taylor doesn’t hold a UT offer, but he visited Texas for the Orange-White Game and could be in line for one during the evaluation period.

Update: Texas signed two offensive linemen in 2017 and will hope for more this cycle. The Longhorns likely want two tackles and at least one interior prospect. Herman’s staff is in good position for Stratford, a three-star and Fab 55 member from Allen. Stratford plays tackle in high school, but likely transitions to guard in college due to a lack of length. He’s visited Texas numerous times this year. The top in-state targets at offensive tackle are Ghirmai and Moore. Ghirmai is a fast-rising prospect who likely ends the cycle as a four-star prospect. He visited Texas for the Orange-White Game and said Texas is “really high” on his list. Moore, a prep tight end at Seminole, has tremendous upside because of his combination of height and athleticism. Louisiana three-star Cameron Wire recently picked an offer. The 6-6, three-star is raw, but built like a future talent.

Update: Defensive end could prove tricky for the Longhorns. The top two in-state targets — Wright and Ossai — are considered Texas A&M leans. Wright would prefer to play defensive end in a 4-3 scheme and Ossai is on-record saying A&M is his dream school. Beyond those two, there aren’t a ton of options in-state for the Longhorns. Wright and Ossai did visit Austin for the Orange-White Game and the longer both keep their recruitment open, the longer Herman’s program can recruit. Tatum, an Oklahoma product, will be tough to get out of his state. The Longhorns recently offered Carson, a three-star from Missouri with a 6-5 frame.

Defensive tackle update: The depth at defensive tackle means the Longhorns can be selective in 2018. The top target is clearly Coburn, who is familiar with Texas’ staff through former high school head coach Corby Meekins. The four-star from Spring Westfield visited Texas for the Orange-White Game and is among a group of players considered Texas leans. Arlington Lamar’s Bobby “Tre” Brown and Bishop Dunne’s Calvin Avery are the other two in-state tackles with Texas offers.

Update: Texas found half of the puzzle at the position in the class when Hobbs became the second pledge of the class. He’s a hybrid outside linebacker who will play the Rover position at Texas. He can blitz off the edge like a defensive end, but can also play in space and cover tight ends and running backs. Texas would take Orji and Gainer and figure out scholarship numbers later. Orji is a four-star talent from Rockwall who projects as an inside linebacker. Gainer is built like Hobbs at 6-2 and 205 pounds, and could play either outside linebacker position. His friendship with fellow Florida product and Texas commit Justin Watkins gives the Longhorns a chance if he visits this summer.

Update: A home run at cornerback for Texas would mean signing day signatures from Cook, the No. 1 player in the state, along with his high school teammate, Jamison, and four-star Houston Heights product, Green. Those three players would represent the best cornerback trio signed in the 2018 class and the Longhorns are in good position with all three. Herman’s staff was one of the first to offer Green back when he ran Houston’s program. Jamison and Cook come from the high school that produced secondary talent like former Longhorn Rod Babers and current starter Holton Hill.

Update: Texas shouldn’t find trouble signing quality players in the secondary. Like wide receivers on offense, the safety and cornerback position is loaded with plenty of in-state talent. Foster, a five-star prospect and No. 2 on the Fab 55, is a Longhorns lean who visited Texas for the Orange-White Game, as did four-star Leon O’Neal. Texas’ staff was one of Arp’s DeMarvion Overshown’s first offers. Texas is arguably leading with all three.

The biggest ‘What ifs’ of Texas football