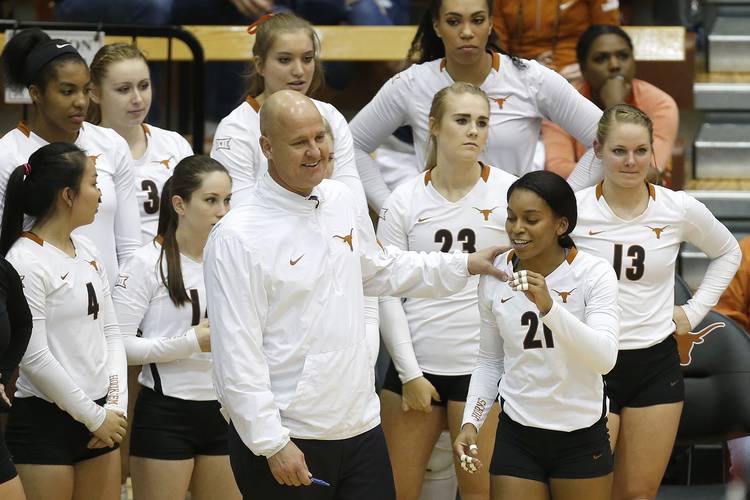 This fall, Texas volleyball will count three All-Americans and the nation’s top two recruits among its offensive options.

Who, though, is going to set those players up?

All-American setter Chloe Collins, No. 4 on UT’s career assists list, is now a Texas Ex. Her graduation leaves Riley Fisbeck as the only setter on the current roster since highly-regarded prospect Ashley Shook is still in high school. And Fisbeck didn’t play during her first year, so neither of the Longhorns setters will have any collegiate experience.

Fisbeck, a La Grange native, distributed 38 assists over four sets in Texas’ spring-ending exhibition against North Texas on Tuesday. Shook, meanwhile, is an Under Armour All-American out of Illinois who was rated as the Class of 2017’s sixth-best recruit. (Fellow signees Lexi Sun and Brionne Butler topped that PrepVolleyball.com list).

“(Riley) works so hard. I know how bad she wants to be good, so that’s awesome to see. We all have confidence in her,” libero Cat McCoy said. “Ashley is an amazing setter. I think it’s going to be great for her to come in and compete for a spot from day one.”

Texas football coach Tom Herman has spent time eyeing “the waiver wire” this spring in search of a graduate transfer who could join younger quarterbacks Shane Buechele and Sam Ehlinger on the depth chart. Would volleyball coach Jerritt Elliott do the same thing for the quarterback of his team?

“I don’t think so,” said Elliott, who is entering his 17th season at Texas.  “Ashley’s really, really good, and I thought Riley played her best match of the spring. We just need to keep developing them and see what happens.”

Moving back:  Yaazie Bedart-Ghani earned NCAA all-tournament honors as an outside hitter in 2015, but she made a mid-season move to middle blocker this past year as Texas attempted to address a need. Bedart-Ghani averaged 1.68 kills and 0.97 blocks per set in 2016, and the 6-4-sophomore connected on 13 of her 14 attempts in a postseason win over UT-Rio Grande Valley.

The hole that Bedart-Ghani was asked to fill this past season, though, no longer exists. In fact, Texas may have too much depth in the middle.

After missing the 2016 season, three-time All-American middle blocker Chiaka Ogbogu has rejoined the team. Junior-to-be Morgan Johnson is coming off a 150-block year. Butler has already enrolled at Texas, and the Longhorns have high hopes for rising sophomore Orie Agbaji.

So Bedart-Ghani will shift back to the outside, where Elliott says she will be used as either an outside or opposite hitter. In addition to Bedart-Ghani, Texas can attack from the pins with All-Americans Micaya White (4.03 kpg) and Ebony Nwanebu (3.74 kpg). Sun is also the reigning Gatorade Player of the Year.

“I’d love to be on one of the pins,” Bedart-Ghani said. “I think that’s where a lot of my strengths lie. We’ll see.”

Globetrotting: Now that the spring season is over, some members of the volleyball team can shift their attention to traveling. In May, Elliott will lead a team of college players that includes Bedart-Ghani, Ogbogu, Johnson and White on an exhibition tour through Thailand. Earlier that month, Elliott, Butler and graduate assistant Kevin Inlow also will join forces on a U.S. women’s junior national team that will compete in Costa Rica.

Three Longhorns also will be in Haiti in May, although they won’t be appearing on a volleyball court.

McCoy will be joined by Nwanebu and defensive specialist Natalie Gilbert on a mission trip there from May 24-31. The players will work with a group called “Longhorns for Haiti,” which includes members of the school’s soccer program. McCoy said she had always wanted to go on a mission trip, but it was hard to schedule one around her volleyball obligations.

The biggest ‘What ifs’ of Texas football

Class of 2017: Lake Travis’ Cade Brewer packs on the Freshman 15 (and then some)