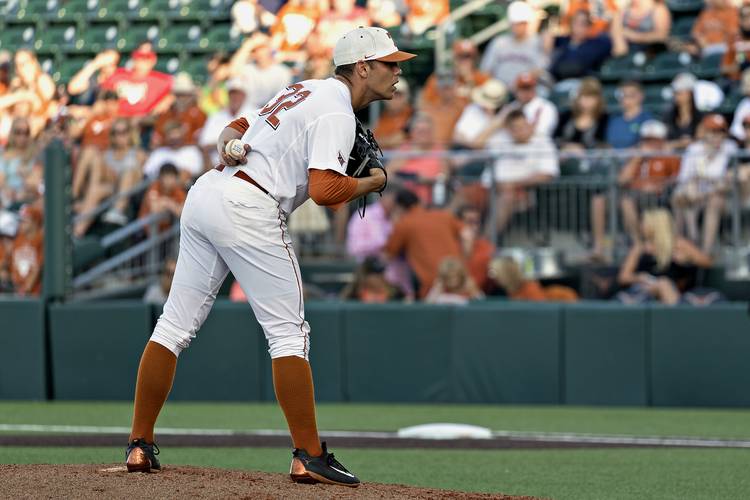 Nick Kennedy thought his Friday would consist of advertising and communication classes and possibly an appearance out of Texas’ bullpen.

Instead, the left-handed sophomore got six innings and a win.

Kennedy was solid in a spot start, and Texas slowed down another hot-hitting — but mid-major — batting order in a 7-1 win over New Orleans. On a weeklong break from Big 12 play, Texas (26-15) has won 10 of its last 11 games at UFCU Disch-Falk Field.

“These kind of games, we need to get the win and get our feet back under us and get going,” Kennedy said. “I think we did that tonight. Everybody kind of did well, so I feel good about it.”

As it had throughout the season, Texas was expected to give its weekend-opening start to sophomore Nolan Kingham. However, Kingham was benched for “academic reasons.” Texas coach David Pierce said he didn’t anticipate that Kingham, who was in uniform, would miss next week’s start at Oklahoma State.

To replace Kingham, Pierce turned to Kennedy. While he was heading to class around 11 a.m. on Friday, Kennedy was notified of the pitching change.

Making his first start since April 11, Kennedy struck out three batters over a 90-pitch effort. Kennedy walked two and New Orleans leadoff hitter Aaron Palmer was the only Privateer he couldn’t get the best of. Palmer collected three of New Orleans’ four hits against Kennedy, who limited the four batters after Palmer to a 0-for-12 performance.

“I’ve kind of struggled the past two of three outings,” said Kennedy, who improved to 6-0 and lowered his ERA to 2.60. “I’m glad I got to come back out and get my feet back under me and get going again.”

Relievers Tyler Schimpf, Parker Joe Robinson and Chase Shugart closed things out for Texas. The Longhorns lost their bid for this season’s seventh shutout in the ninth inning when Palmer earned a two-out infield single with the bases loaded. Shugart, though, then entered the game and struck out the only batter he faced.

“Our starters, again, are giving us a chance to win,” Pierce said. “I like what we’re doing. I still think there’s so much room for improvement, though.”

With its .247 average, Texas was batting worse than 256 teams. (Seven of those programs play in Texas’ nine-team conference). Texas gathered 10 hits and five walks on Friday night. Two of those hits were Travis Jones’ two-run homer in the third and Kacy Clemens’ solo shot in the fifth.

Five of Texas’ seven runs were scored with two outs.

“That’s kind of been our mojo, we’ve been getting a lot of runs with two outs,” said Clemens, who also provided a two-run single. “If we can get those opportunities where we have runners in scoring position with less than two (outs) and get those guys in, it’s going to help us out.”

Rounding the bases: Texas is 7-0 in its all-time series against New Orleans. The two teams last played, however, in 1989. … Texas junior Jake McKenzie played two innings at second base on Friday. McKenzie has pitched 10 innings this season, and he has also appeared as a designated hitter and played at every infield position except for shortstop. … Clemens’ home run was his eighth of the season. … Texas junior right-hander Morgan Cooper (4-2, 1.63 ERA) will be opposed on Saturday by New Orleans lefty Bryan Warzek (5-1, 2.14).