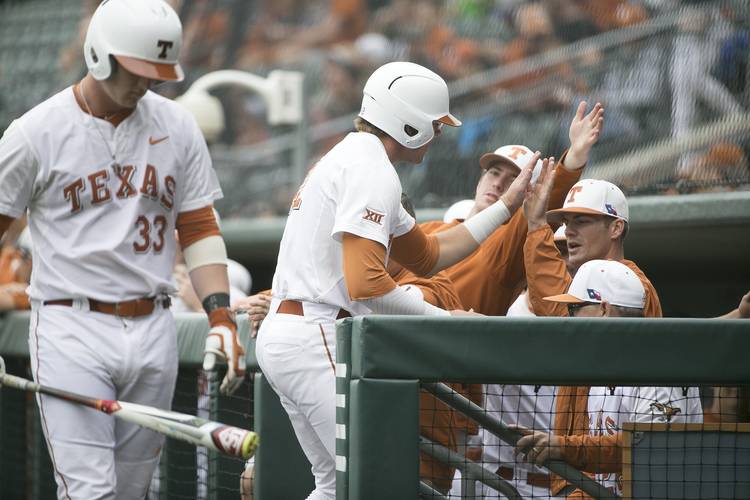 Texas' Kacy Clements is congratulated by the team after scoring during the first inning against New Orleans on Saturday. DEBORAH CANNON / AMERICAN-STATESMAN

A victim of one-run decisions throughout this season, the Texas baseball team squeezed into the win column Saturday.

Junior Morgan Cooper remained in contention for the Big 12’s ERA title, and Texas found just enough offense in a 3-2 nonconference win over New Orleans. Texas had been a loser in 10 of its 14 one-run games this year but improved to 27-15 with the victory at UFCU Disch-Falk Field.

Facing New Orleans left-hander Bryan Warzek, Texas grabbed the lead it wouldn’t let go of during a three-run first inning. UT loaded the bases with one out, and those three Longhorns came around to score on Ryan Reynolds’ double and Austin Todd’s sacrifice foulout.

That opening effort gave Texas — a 7-1 winner Friday night — 10 runs over this weekend’s first 10 innings against New Orleans.  Warzek, however, held Texas scoreless over the next six innings, and UT didn’t score against the New Orleans bullpen in the eighth. The Longhorns were limited to six hits, although Travis Jones improved his batting average to .301 with a 2-for-4 performance.

He retired the first 10 batters he faced Saturday before Aaron Palmer, who had gone 4 for 5 on Friday, singled in the fourth frame. Palmer later scored, but that would be the extent of the damage against Cooper.

Texas coach David Pierce had decided before the game that Cooper would be limited to 90 pitches, though that was not shared with the pitcher. Cooper needed only 85 pitches in a six-inning stint that featured seven strikeouts. He allowed five hits and a walk.

“It was a very solid outing for Morgan,” Pierce said.

Beau Ridgeway picked up his ninth save by recording the final five outs. New Orleans (19-20) stranded a runner at second base in each of the last two innings.

Rounding the bases: For the first time since his Tommy John surgery in the offseason, sophomore Kody Clemens played the field. Clemens had been able to hit this season — he entered the game with 107 at-bats — but his start at second base was his first defensive appearance since he was the Longhorns’ third baseman on May 28, 2016. … Texas batters were hit by four pitches Saturday, tying a season-high. … Texas junior Kyle Johnston (2-1, 3.27 ERA) will start Sunday against Riley Hodge (0-1, 6.75).