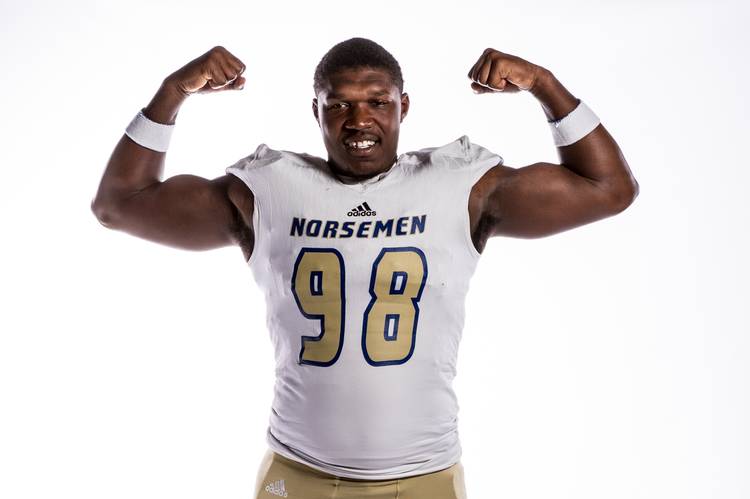 MIAMI, Okla. — There are three different ways to get from Valdosta, Ga., on the state’s southern border, to Northeastern Oklahoma A&M. You can go through Mississippi, Alabama or Tennessee. It’s mostly boring interstate from end to end.

Jamari Chisholm doesn’t remember which route that cramped Greyhound took. He just paid the $130 fare, hugged momma one last time, climbed on board and set off for a great adventure.

Twenty-four hours and eight stops later, Chisholm arrived in Miami, home of 1969 Heisman Trophy winner Steve Owens. “It was horrible,” he said. Of the ride, not Miami.

Chisholm had agreed to enroll at NEO sight unseen. That meant the coaching staff hadn’t seen him in person, either. “I was thinking, ‘What have I gotten myself into?’ What am I going to do to actually impress these guys?” he said.

His first game as a freshman in 2015 didn’t go so well. This “lanky kid,” a 250-pound stick as he called himself, put his hand down at the line of scrimmage for his first defensive play. Then “the tackle comes off the line and blows me up,” Chisholm said. “It was a true wake-up call.”

Giving up and going back home wasn’t an option at that point. So Chisholm simply buckled down, picked up some weights, put down those hamburgers, opened some books and started a two-year journey that should continue this fall at Texas.

“When Jamari first got here, he was real raw,” NEO defensive line coach Lane Powell said. “Still kind of is in some regards.”

Chisholm, a 6-4 lineman now 275 pounds, was a signing-day surprise that caught some of the best recruiting railbirds flat-footed. He was a lightly recruited three-star prospect that had offers from Syracuse, Georgia State and Central Florida.

But inside the NEO weight room, there’s a magnet board with 76 business cards. Younger recruiters probably tack up their contact info as some mundane identifier — a modern-day “Kilroy was here.” Graybeards know that NEO is a machine, one that’s cranked out 33 FBS and FCS signees in the last 18 months alone.

One card sticks out, too. It’s that of Oscar Giles from his days at the University of Houston.

Long before Giles joined Tom Herman at Texas last November, the Cougars were tracking the talent at NEO. Giles first met Chisholm at UH’s 2016 spring game when several players ventured down to Houston. Giles and Chisholm stayed in touch, but as January rolled along Giles hadn’t offered Chisholm a spot with the Longhorns.

NEO coach Clay Patterson tells his players to make themselves marketable. Anything can happen on signing day. NEO’s Larry Joubert, an offensive tackle, was supposed to go to New Mexico but wound up at Oklahoma State. Fellow offensive lineman Kris’sean Edwards held an FCS offer but landed at New Mexico State, for example.

“It’s about being ready when your number’s called,” Patterson said.

Or, things could work out the other way around, too. Chisholm visited Texas on Jan. 13 but, with no UT offer in hand, he committed to UCF on Jan. 24.

On the afternoon before national signing day, Chisholm started texting with Giles and asked the UT assistant to call. If Texas would send the paperwork, Chisholm told Giles, the defensive lineman would sign as fast he could.

By this point, the UT coaches either knew or had some indication they were going to strike out with other targets. Any school that offers a recruit literally just hours before national signing day can be accused of panicked overreach. That’s not how Chisholm sees it, though.

Chisholm was rated the 22nd-best defensive tackle prospect in the nation, according to 247Sports. He had 57 tackles, 4.5 sacks and four fumble recoveries in 10 games as a sophomore. Giles and Chisholm had almost a year-long relationship, and both sides knew how badly the player wanted an offer from a Power Five-level school.

Chisholm believes it was fate, to some extent.

If the Texas spring game was any indication, the Longhorns can use a ready-made defensive tackle for depth purposes. “He’s not an edge rush guy,” said Patterson, who believes one of his team leaders will make a solid interior anchor in Austin.

Chisholm admits he’s got to finish some solid academic work first. He’s had to retake algebra, and Chisholm is weighed down this spring with English, biology and history courses.

Same as it was two years ago, failure really isn’t an option.

“There is no going back home. You’ve got to make somebody proud,” Chisholm said. “I kept my family in my graces every day. Every day I stepped out on the field, I was thinking about doing this for my mom. I want to wake up one day and buy her a house.”

Editor’s note: This is the third of a series of looks at Texas’ 2017 signing class, as we reach out to the recruits themselves across Texas, Oklahoma and Florida to get a sense of just what the Longhorns are getting. Past stories:

The Dotted Line: A look at current 2018 recruiting classes around the Big 12, Texas

ESPN lays off reporters, but no changes expected at Longhorn Network