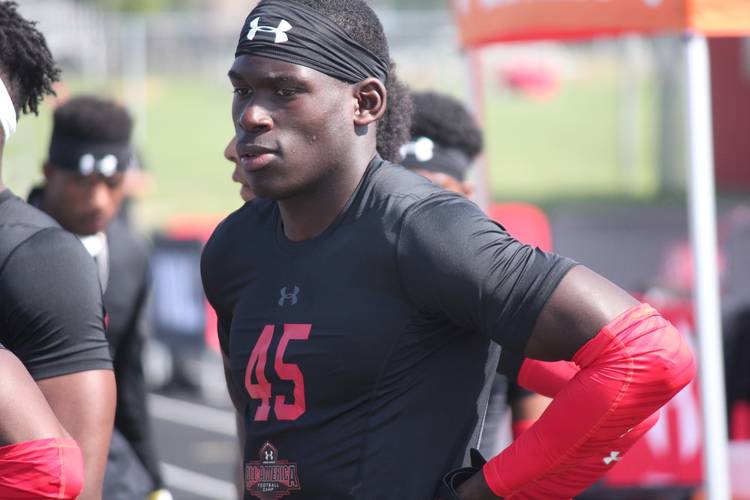 The Longhorns are up to five commitments in the 2018 class after flipping four-star quarterback Cameron Rising from Oklahoma and gaining the commitment of three-star offensive tackle Reese Moore.

The three highest-ranked players currently committed to Texas are out-of-state prospects. Moore and linebacker Byron Hobbs are three-star recruits, per 247Sports Composite Rankings. Texas’ current 2018 class ranks No. 20 in the nation, per 247Sports.

In this week’s Dotted Line, we take a closer look at the current state of recruiting classes for the major programs in Texas and the Big 12.

Latest on A&M: No program in the state jumped out to a quicker start than the Aggies. Kevin Sumlin’s program gained commitments from two four-star offensive tackles in Blanton and Matthews, who is a Texas A&M legacy. Wide receiver Montel Parker from Dickinson provides height and playmaking ability, while Jordan Moore from Yoakum is one of the top safeties in the state. The Aggies also hold commitments from quarterback Cade Fortin out of Georgia and defensive tackle Dominic Livingston from Aldine Davis in Houston. The current 2018 class ranks No. 17 in the nation.

Latest on Baylor: New head coach Matt Rhule rallied the 2017 class late in the cycle after taking over a program rife with off-the-field concerns. Baylor ended the 2017 cycle with the No. 40 ranked class in the nation, good for the fifth-best class in the Big 12 behind Oklahoma, Texas, TCU and Oklahoma State. The Bears are off to a good start in 2018 with Cedar Hill athlete Joshua Fleeks as the headliner. The 5-foot-11 playmaker could end up at wide receiver or running back in college. Baylor has three offensive tackles committed with Jackson Kimble from Southlake Carroll ranked the highest of the three, per 247 Sports. Wide receiver Tyquan Thornton from Miami is the program’s lone out-of-state commit.

Latest on TCU: The Horned Frogs are known for defense, and Gary Patterson is securing the future of his unit early in the 2018 cycle. Vongor, a four-star safety from South Grand Prairie, became the headliner of class. He’s already earned an invitation to The Opening Finals in Oregon this summer. Cornerback Trevon Moehrig-Woodard, a Fabulous 55 member from Smithson Valley, and Manor’s Ochaun Mathis, a three-star defensive end, are also committed. The other two members of the class are three-star offensive linemen Esteban Avila, a teammate of Vongor, and Devin Phillips from Louisiana.

Latest on Oklahoma: The Sooners are experiencing a rough patch in recruiting. Oklahoma lost its 2018 quarterback when Rising flipped to Texas. Two of the top 2019 prospects in Texas also de-committed from Oklahoma last weekend. Bob Stoops is likely to rebound and build another solid class in Norman. The Sooners still hold a commitment from five-star offensive tackle Brey Walker, who is a teammate of Texas commit Casey Thompson at Southmoore High School in Oklahoma. The Sooners also hold a commitment from four-star running back T.J. Pledger. The IMG Academy (Fla.) product also held an offer from Texas. Austin is Oklahoma’s lone commitment from Texas. Defensive back Patrick Fields and defensive tackle Jordan Kelly, both three-stars from Union High School in Oklahoma, round-out the current 2018 class.

Latest on Houston: Tom Herman’s old program only holds one commitment in the 2018 class. Three-star running back Kelan Walker from DeSoto is the team’s lone commitment.

Class of 2017: Giving up, going home not an option for Jamari Chisholm