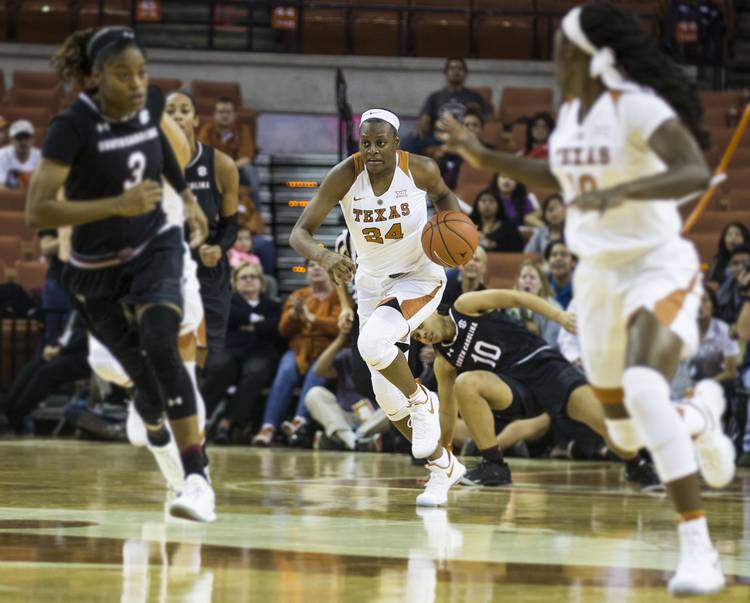 Texas Longhorns Joyner Holmes is among 10 Longhorns who were McDonald's All-Americans. RICARDO B. BRAZZIELL/AMERICAN-STATESMAN

Texas was satisfied to enter the 2017-18 season with two new McDonald’s All-America basketball players. On Tuesday night, the Longhorns unexpectedly received a pledge from a third.

Destiny Littleton, a 5-9 guard from La Jolla, Calif., announced on her Twitter account that she will be a Longhorn next season. Littleton, who had signed with Southern California but granted a release after coach Cynthia Cooper-Dyke resigned from the Trojans, led the nation with an average of 48.1 points per game as a senior.

On her Twitter account Monday night, Littleton said her life was “turned upside down” after Cooper-Dyke resigned. Last week she visited Texas and was clearly impressed with the Longhorns’ program.

It was love at first sight💛🤘🏽 pic.twitter.com/RDedUkLmgm

“What kept me going were the people around me, telling me everything happens for a reason. I stayed true to myself and what the man upstairs had in store for me. I fell in love with a program as soon as stepped foot on the campus.

“The coaching staff is amazing and goofy just like me. It wasn’t easy to say no to USC but it was necessary. I want to thank everyone who was by my side the entire way. … But the process is finally over and I am proud to say I will be a Texas Longhorn.”

Texas already signed two other McDonald’s All-Americans who are expected to make an impact as freshmen. Forward Rellah Boothe of Ocala, Fla., and Chasity Patterson of Houston will join Littleton at Texas in the fall.

The Dotted Line: A look at current 2018 recruiting classes around the Big 12, Texas