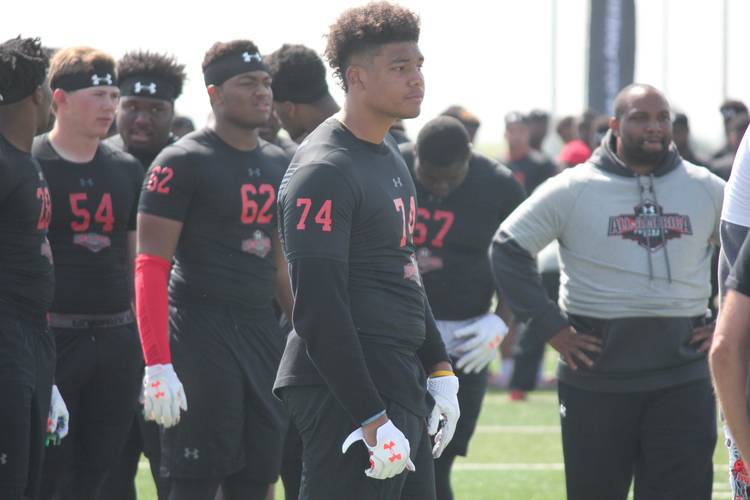 Texas’ assault on Oklahoma’s recruiting outlook for 2018 continued Wednesday when four-star defensive end Ron Tatum chose the Longhorns and Tom Herman over Bob Stoops and the Sooners. Tatum is the No. 122-ranked national prospect and the No. 5 ranked strong-side defensive end in the nation, per 247Sports. The Putnam City (Okla.) product is the No. 4 ranked prospect in Oklahoma.

Here is more on Tatum as a player and what his commitment means for Texas in the short-team and the long-term.

Skill set: Tatum is a big-bodied defensive end with strong hands at the point of attack. At camps like The Opening and Under Armour All-America Camp Series, he stood out as one of the top performers. His sheer size and strength are a tough draw for any prep offensive lineman. He’s a bully when he can create contact and use a power rush. He’s not the type of defensive end who will blaze around the edge, but he won’t need to be in Texas’ defensive scheme. Tatum wants to play five-technique defensive end and he’ll get that chance in Texas’ odd-man front. At nearly 6-5 and already 269 pounds, it is likely he only grows once he reaches campus and could easily end up at defensive tackle. Tatum is a four-star prospect for a reason and would be a top 20 player in Texas and a member of the Fabulous 55 if he played high school football in the state.

Immediate impact: Herman is making a statement by matching recruiting prowess with Stoops. Texas’ new head coach isn’t flinching with his recruiting strategy and it is paying off around the country. Texas now has six commitments and only two are from Texas, the same amount who play football in Oklahoma. Cameron Rising, who plays in California, was committed to Oklahoma until his recent flip. Tatum is proof that Herman’s staff is making an impact on the recruiting trail and defensive line coach Oscar Giles should receive a large amount of credit for bringing in Tatum. Tatum’s physique suggests he could make an impact as a true freshman along the defensive line.

Fitting into the program: The new goal for Texas is to keep Tatum committed. Just because the four-star defensive end chose the Longhorns in a ceremony in April doesn’t mean Oklahoma and other schools will stop recruiting him. If the Longhorns can keep Tatum in the fold until national signing day, it is getting the type of player Herman and Orlando want on defense — physical, athletic and versatile. With Texas’ use of defensive linemen, Tatum could wind up playing multiple positions as a Longhorn.

ESPN lays off reporters, but no changes expected at Longhorn Network