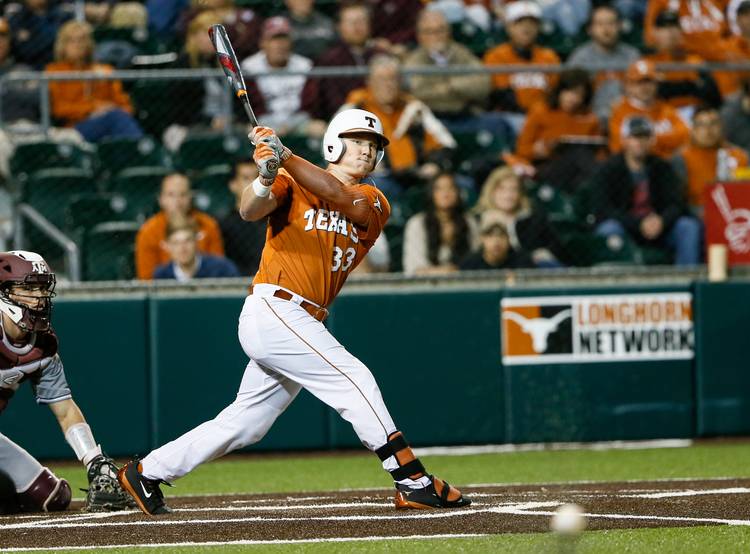 On April 18, Patrick Mathis found a surprise atop Texas’ batting order: Himself.

In the season-long search for a leadoff hitter, Texas coach David Pierce inserted Mathis into his lineup’s first slot ahead of a 2-0 win over Texas State. The junior outfielder had some of the intangibles that Pierce wanted out of the leadoff spot. Mathis, though, lacked lineup-topping experience.

On Wednesday, Mathis estimated he was 11 years old the last time he hit leadoff. During his three years at Texas, he’s been penciled into the batting order’s third, fourth or sixth slots in 57.9 percent of his 76 starts.

“I’m usually a middle-of-the-lineup power guy,” said Mathis, whose six homers tied Tres Barrera in 2016 for the Longhorns lead. “It’s been cool, it’s been fun, it’s a new experience. I’m just doing everything I can to get the job done.”

Over his first four games at leadoff, Mathis is 4 for 14 with two walks. In Sunday’s 4-3 win over New Orleans, he drove in each of Texas’ runs.

Pierce has said that Mathis’ on-base percentage — he ranks third among the Longhorns at .396 — was one reason why he’s now hitting first. Mathis’ left-handed bat and ability to run also were appealing. In 28 games this season, Mathis is 4 of 5 on steal attempts, and he’s hitting .230 with three home runs.

“What I love about Patrick in the one-hole is that he can start the game with a home run, a double or a base on balls. He gives us some different types of positive options,” said Pierce, who noted that “If he can lay off of some of the secondary pitches that are not strikes, then they’ve got to feed him fastballs.”

No Longhorn is hitting better than .300, and the team’s .245 average bests only Kansas (.243) in the Big 12. Those offense woes start up top, where Texas has gotten 25 runs and 24 RBIs from seven leadoff hitters who are a combined 40-for-175 at the plate. With 19 starts, junior Travis Jones has the most leadoff experience.

Jones, who has recently been batting in the middle of the order, told reporters that his mindset remains the same regardless of where he’s hitting in the lineup. Mathis also said that “I haven’t really changed a whole lot.” Texas’ new leadoff hitter, though, did concede he needs to be more selective with the pitches he swings at.

“You always want to get things started off in the right direction,” Mathis said. “I’m always trying to get on base batting leadoff and trying to get something started.”

Leading Longhorns: Texas is sending its baseball team to Oklahoma State this weekend, while the softball squad travels to Kansas. That leaves the track and field program as the best show on campus.

Starting on Friday, Texas will host a Longhorn Invitational that features nationally-ranked teams Auburn, Virginia Tech and Stanford. With the Big 12 outdoor championships set for May 12-14 in Lawrence, Kan., conference rival TCU also will make an appearance at Myers Stadium.

“It’s our last little tune-up prior to the Big 12 championships,” Texas coach Mario Sategna said. “You’re obviously wanting to put the finishing touches prior to heading to KU.”

Texas is coming off a week in which Olympians Chrisann Gordon and Byron Robinson earned the conference’s Track & Field Athlete of the Week awards.

Both seniors competed at the LSU Alumni Gold competition, and Gordon established the NCAA’s 2017 high-water mark in the 400 meters (50.64 seconds). She joins freshman and fellow Jamaican Rushelle Burton, who was clocked at 12.65 seconds in the 100-meter hurdles at the Texas Invitational on April 15, as Longhorns with nation-leading times.

Last week, sophomore Meghan Lloyd also set the school’s record in the steeplechase. Lloyd was competing at a meet at Stanford, and her time of 10:20.37 crushed Brittany Marches’ 2014 run of 10:26.9.