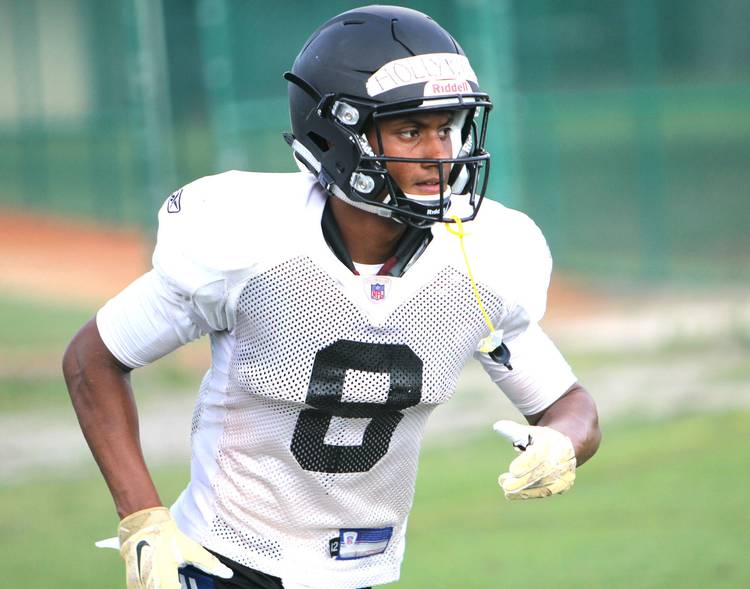 WINTER PARK, Fla. — Every morning, Jordan Pouncey wakes up 2,500 miles away from the city that inspired his nickname.

In a couple of months, he’ll cut that distance in half.

“Hollywood” is coming to Austin in the form of Pouncey, a 6-2, 190-pound wide receiver that Texas signed out of the Orlando area.

If you ask Pouncey, a three-star recruit who had 48 catches over his two years at Winter Park High School, the origins of his nickname go back to his transfer from Montverde Academy. His old high school discontinued its football program after Pouncey’s sophomore season, but his new Winter Park classmates knew about the pedigree of the private school he was leaving; Montverde is the home of Cleveland Indians shortstop Francisco Lindor and it boasts a nationally-known basketball program that produced recent NBA lottery picks Ben Simmons and D’Angelo Russell.

Of course, there are plenty of other ways to tie Pouncey to his Hollywood nickname.

He did, after all, direct a video that announced his commitment to Texas. He aspires to be a sports broadcaster. The 12 pairs of gloves and the four sets of cleats that he wore his senior season also are a testament to his on-field style, which was formed during his childhood by his mother’s accessories-for-touchdowns bribes.

More importantly to the audience he is gaining at Texas, “Hollywood” may best describe Pouncey’s versatility.

When it comes to Hollywood, versatility may make one think of Daniel Day-Lewis, Leonardo DiCaprio or Tom Hanks.

In terms of Pouncey, think receiver, running back and defensive back.

Pouncey averaged 19.7 yards per reception over the past two falls. Winter Park coach Tim Shifflet moved him to the backfield this past season, and he rushed 86 times for 768 yards. Three of his 12 touchdown runs were 46-, 45- and 58-yard scores that were recorded on consecutive carries in a September win.

He also returned punts and kickoffs and excelled on defense. Pouncey himself listed a game-sealing pass breakup against rival Timber Creek as his top moment at Winter Park. Florida recruited him to be a collegiate defender, and Shifflet said he has the potential to be a “great” cornerback or safety.

“I know they (the Longhorns) brought him in as a receiver, but he can do so many things,” Shifflet said. “What he is now, here at Winter Park High School, two, three years from now, he’s going to be one of those kids that comes back and he’s going to be twice the kid, twice the player. He’s just scratching the surface.”

Pouncey’s first on-field memories were made as a quarterback, but he was asked to shift to receiver in the fifth grade. Pouncey, though, was hesitant about the position change.

His coaches called in a favor from Sam Richardson, the high school’s varsity quarterback who “was a celebrity in Winter Park,” according to Pouncey. Richardson, whose offensive coordinator for one season at Iowa State was future Texas coach Tom Herman, gave a 10-minute pep talk to Pouncey, and the starstruck player was convinced to trust his coaches.

Years later, the perks of being a receiver have caught on.

“Not being crushed between 500-pound guys,” added his mother, Erica.

Pouncey joined Tyler John Tyler wideout Damion Miller in Texas’ 2017 recruiting class. At Texas, they will join a crowded receiving room that features six players who caught between 18 and 34 footballs in 2016. None of those receivers, however, have ever earned all-conference honors.

Sitting in the living room of his home earlier this month, Pouncey said he is confident he can contribute immediately.

“I respect the receivers there, because they are college football players. They earned the right just like I did,” Pouncey said. “But it’s a dog-eat-dog world, so I ‘m going to go in there and we’ll hang out and kick it, but on the field …”

Pouncey chose Texas over Miami, Notre Dame and Tennessee. He originally committed to Notre Dame last June, but then de-committed when Mike Denbrock, the Notre Dame receivers coach who’d recruited him, left the Fighting Irish for Cincinnati in late December. That six-month commitment to the Fighting Irish, though, means he’ll be one of the few players in UT’s refurbished locker room who wasn’t rooting for the Longhorns last September when Texas opened the season with a double-overtime win at Notre Dame’s expense.

“Watching it at a Notre Dame commit, it was a real big letdown,” Pouncey recalled. “I go back and watch the highlights every once and a while, and it’s like, this is nice.”

Editor’s note: This is the fourth of a series of looks at Texas’ 2017 signing class, as we reach out to the recruits themselves across Texas, Oklahoma and Florida to get a sense of just what the Longhorns are getting. Past stories:

Cameron Rising — Texas’ other four-star pledge — is all football, all the time