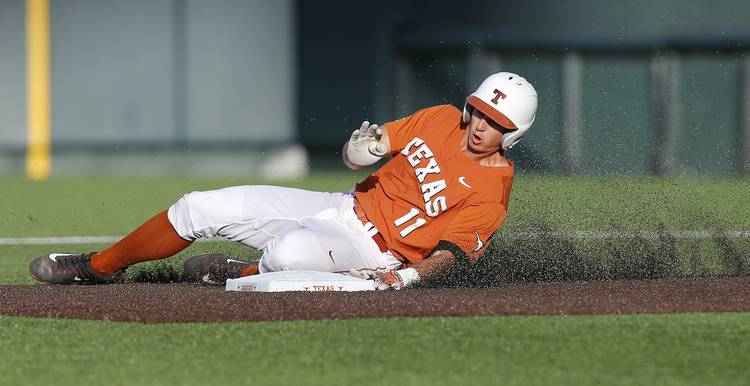 Texas outfielder Travis Jones slides into second base on May 2, 2017. Jones is among the Longhorns who were drafted this week but still have college eligibility left on the table. (Stephen Spillman / for AMERICAN-STATESMAN)

Backed by the middle of its infield, Texas picked up another mid-week win.

Texas turned four double plays at UFCU Disch-Falk Field on Tuesday in a 4-1 victory over UT-Arlington. Outfielder Travis Jones also homered as the Longhorns improved to 31-16.

Texas is now 11-2 in games played on Tuesdays and Wednesdays. The Longhorns were 6-5 in such games during last year’s 25-32 campaign.

“I (came) in here just knowing that we have to be good in these types of ballgames,” first-year coach David Pierce said. “When you start adding those wins up, it starts building your résumé. We’re seeing the results of that right now.”

Texas junior Kyle Johnston threw on Tuesday after a weather-related cancellation cost him this past weekend’s start at Oklahoma State. The expected starter for this Sunday’s game against TCU, though, was working with a pitch count in the 50s. Johnston allowed five hits, three walks and an earned run.

After 59 pitches, Johnston was pulled with one out in the third inning.

UT relievers Nick Kennedy, Tyler Schimpf and Beau Ridgeway took the Longhorns the rest of the way. The left-handed Kennedy threw 3.2 innings of one-hit baseball and was credited with the victory. Ridgeway, who was recently placed on the midseason watch list for the National Collegiate Baseball Writers Association’s 2017 Stopper of the Year award, earned his 11th save after a five-pitch ninth inning.

Texas’ four pitchers were supported by that quartet of double plays, two of which got the Longhorns out of bases-loaded jams. The four double plays — all of which included freshman shortstop David Hamilton and junior second baseman Bret Boswell — gave Texas 52 for the season. UT entered the evening trailing San Diego State by four double plays on the NCAA Division I leaderboard. (San Diego State played at UCLA on Tuesday night).

Texas broke a 1-1 tie with Kacy Clemens’ sacrifice fly out and Ryan Reynolds’ RBI double in the third inning. Jones, who had doubled earlier in the game, then sent a fifth-inning pitch from Mavericks reliever Austin Gardner over the fence for his fourth homer.

Longhorns will wear black patches on their hats tonight in honor of the victims & all those affected by Monday's act of violence on campus. pic.twitter.com/OAxTpzHc4l

The Longhorns and Mavericks met just a day after an on-campus stabbing attack at Texas left one dead and three others injured. Kendrex J. White, 21, has been arrested and charged with the murder of UT first-year student Harrison Brown.

Texas football coach Tom Herman was set to throw out a ceremonial first pitch before Tuesday’s game. That pre-game pomp, however, was replaced by a moment of silence. The Longhorns also wore black patches on their hats.

“Harrison Brown did not deserve to die the way he did,” Pierce said. “It was just a remembrance from our team and an understanding of their family, and our thoughts and prayers with them. It was just something to take a step back and understand how precious life is and just be thankful for it.”

Rounding the bases: Texas will travel to TCU this weekend for a three-game series featuring teams ranked in both the D1Baseball.com and Baseball America polls. …  Clemens, the senior first baseman at Texas, stole his eighth base of the season. Through the first 159 games of his collegiate career, Clemens was 0 for 1 on steal attempts. … Kody Clemens scored twice on Tuesday. … UT-Arlington junior Easton Johnson, who graduated from nearby Anderson High, started at second base and went 0 for 2 with a walk. Round Rock native Colton Turner pinch-hit for Johnson in the ninth inning.