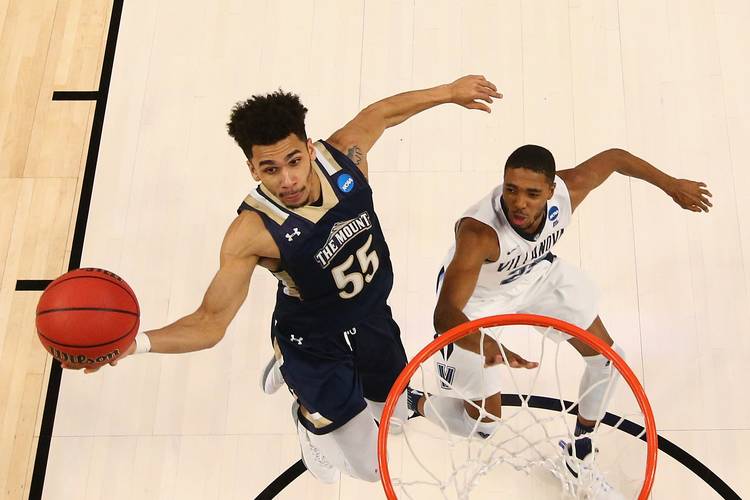 Elijah Long #55 of the Mount St. Mary's Mountaineers shoots against Mikal Bridges #25 of the Villanova Wildcats in the second half during the first round of the 2017 NCAA Men's Basketball Tournament at KeyBank Center on March 16, 2017 in Buffalo, New York. (Photo by Maddie Meyer/Getty Images)

The Texas coach put on a full-court press, and it paid off Wednesday when the sophomore informed the coaching staff he was coming to Austin, according to a source familiar with the decision.

Long, a native Canadian and younger brother of Iowa State’s Naz Long, will sit out the upcoming season per the NCAA’s transfer rules. He will have two years of eligibility remaining starting with the 2018-19 season.

Long averaged 15 points and 4.4 assists in 36 games last season and shot 38 percent from 3-point range. He recently visited the UT campus, and by all indications, the weekend was a success.

“It’s weird because my mom always liked Shaka since high school and I never thought I’d be able to talk to him, you know?,” Long told Orangebloods after his recruiting visit. “He’s kind of like my coach. He’s a fired-up coach. I feel like he’s part of the players.”

The Longhorns still have two scholarship spots open for the 2017-18 roster. Smart’s coaching staff is still chasing New York standout Mo Bamba, who has yet to announce his decision.

However, a third scholarship could possibly come open if freshman guard Andrew Jones stays in the upcoming NBA draft along with fellow freshman Jarrett Allen, who has already hired an agent. Both Jones and Allen will attend the NBA Draft scouting combine next week in Chicago.