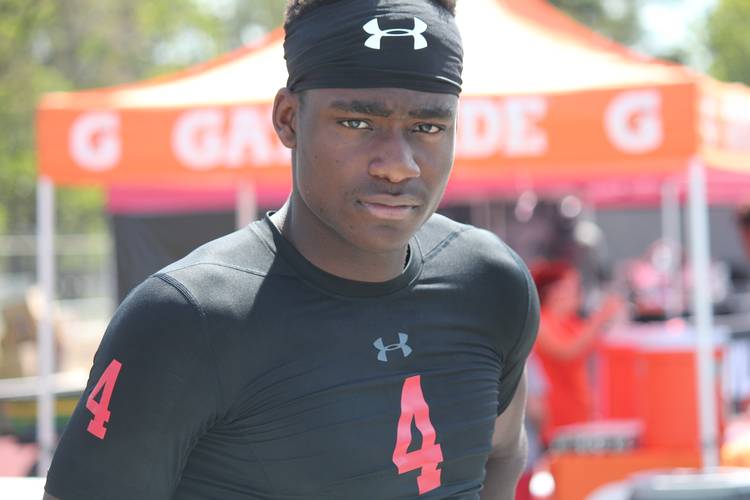 CONROE — The first-time Joseph Ossai watched football, he mistook the sport for rugby. He was 10 years old, newly arrived in this country from Nigeria, and was at his uncle’s, watching a Pittsburgh Steelers game on television. It left a lasting impression. Seven years later, Ossai is a four-star defensive end at Oak Ridge High School with 26 college scholarship offers.

“I couldn’t wait to start playing football after I watched it with my uncle and he began teaching me the game,” Ossai said. “My passion was soccer and track growing up because those were the major sports in Nigeria. I didn’t know anything about the sport and how to play it, so it was hard at the beginning.”

Ossai began his football journey in Conroe. He moved to Oak Ridge before his sophomore season. Now a 6-4, 217-pound pass-rushing specialist, he wasn’t quite a natural back then. He played junior varsity as a sophomore, starting the year on Oak Ridge’s “B” squad so he could get more reps.

“I intended to play wide receiver, but I wasn’t on the field,” he said. “One practice my sophomore year, we needed a scout team defensive lineman. I was bored on the sidelines, so I raised my hand and volunteered. The coach said I was a natural and I started working at that position.”

Ossai began to show glimpses of his potential during spring practices of his sophomore year. He had played safety at Conroe High School as a freshman.

It was all new to him. Football. Oak Ridge. Defensive end. But he kept at it, and Ossai’s head coach noticed.

“He showed potential in the spring of his sophomore year and into fall practice, but when you’re only practicing against other teammates it is hard to know how it’ll translate at the varsity level,” said Oak Ridge head coach Dereck Rush. “He held his own against bigger offensive linemen in our first scrimmage against Cy Ridge. Around the middle of his junior season we knew he had the ability and he kept improving.”

Ossai finished his junior season with 46 tackles (10 tackles for loss), 8.5 sacks, three forced fumbles, three fumbles recovered and one defensive touchdown. The 247Sports composite rankings have him as the No. 207 overall prospect in the nation and the 10th-ranked weak-side defensive end. He spent his offseason competing at camps like The Opening regional and the Under Armour All-America Camp Series, as well as visiting schools for junior days and spring games.

“The spring games are fun. It gives you a chance to experience what it would be like to play at a school and the type of environment it has,” Ossai said. “It’s exciting to watch all the best athletes compete at the elite camps. Iron sharpens iron and it gives us a chance to work on what we’re good at and figure out where we need to improve.”

Ossai’s “dream school” is A&M, a program that offered Ossai months ago.

“Just because Texas A&M is my dream school doesn’t mean I’m automatically committing there. I haven’t yet. If A&M falls short of what I want in a school, I’ll find the best school for me,” he said. “I want to major in mechanical engineering with a minor in computer science. I’m looking for schools that offer those programs and have players who major in the same thing. It also matters how many players from my position get on the field and make it to the NFL.”

Recruiting can overwhelm teenagers. It’s a grueling process because of the time and travel required to make an informed decision. It causes some recruits to lose focus and perspective. Not Ossai.

“He’s remained a level-headed, low-key guy who is a vocal leader and a positive role model for the rest of our students,” Rush said. “We stay on him because he still has a lot to learn. This is all new to him still. He got here with hard work and we remind him of that. Hard work is what will keep him at the top.”