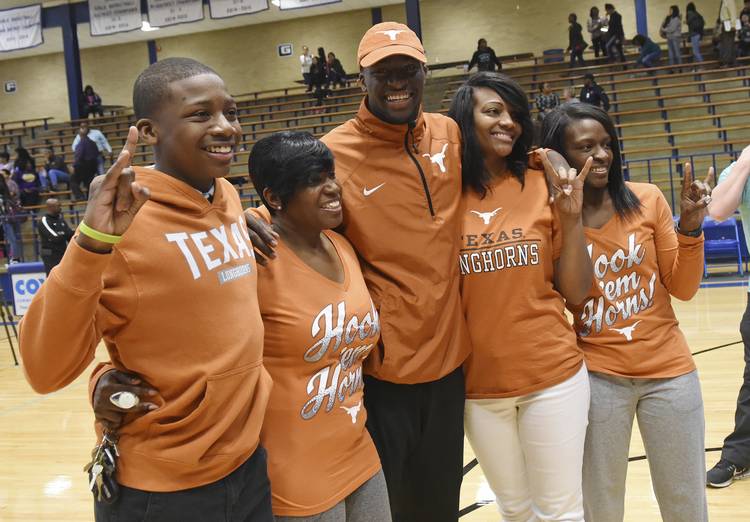 TYLER — Damion Miller wants to become either an engineer or an architect. Something about the numbers intrigues him. “I like math a lot,” the Texas signee said.

Grab a pencil, and let’s check some of his.

Miller had 922 receiving yards on 41 catches as a senior at John Tyler High School last season. That included a 93-yard touchdown catch against Ennis where he used every bit of his 6-foot-tall frame to outleap the defender near the 35-yard line and race home.

That was on top of the 912 yards Miller had as a junior. He had five catches for 177 yards and three touchdowns against Whitehouse alone that year.

All total, there were just over 2,400 all-purpose yards and 18 touchdowns the last two years while playing offense, defense and special teams. There were dozens of scholarship offers, too, but only one that mattered.

“Everybody wants to go to Texas,” Miller said, relaxing in the John Tyler field house wearing a burnt orange pullover, burnt orange shorts and a UT cap. “In football, I’ve always wanted to help them build up the program. They seemed like they needed me. So ever since my sophomore year, oh yeah, I can work with that. So I’m ready.”

The only problem? Miller had to wait another 587 days before his dreams became reality.

He was heading into his junior season at John Tyler when he was offered a scholarship at UT. The answer was yes, yes, yes. So on June 25, 2015, the school announced Miller’s decision via the football program’s Twitter feed, and that was that.

Miller held up his end of the bargain and finished out as the 36th-ranked player on the American-Statesman’s Fabulous 55 statewide recruiting list. But when signing day finally rolled around — Feb. 1, 2017 — Miller was somewhat of an afterthought. He was the first commitment of the 2017 class under former coach Charlie Strong and never wavered. Thus, no drama.

Tom Herman sure tried to get Miller to look at Houston. No thanks, Miller said. So when Herman “landed the job in Austin, it made everything better,” the player said.

“How he was winning in Houston? I believe he will bring that winning streak to Austin, too,” Miller said.

Herman’s UT coaching staff has high hopes for this East Texas speedster. Receivers coach Drew Mehringer has already told Miller to be ready to jump into the rotation during training camp. Here’s where the math gets a little fuzzy.

Houston had the 17th best passing attack in the nation last season. Linell Bonner (98 receptions, 1,118 yards) and Chance Allen (56 receptions, 815 yards) got the lion’s share of the catches. Steven Dunbar (53 receptions, 692 yards) was third. From there, it was a rather steep dropoff in production.

In four- and five-receiver sets, anything is possible.

Miller isn’t an in-your-face type of receiver, according to Holmes. But he is sly. Like the times when he will make a huge catch, jump up and flip the ball to the beaten cornerback … standing next to the official. In one playoff game, Miller scored and heard the corner say, “Bet you won’t do it again.” Miller did and walked back to the sideline holding up two fingers.

“He wants to make sure at the end of the game, there is no doubt in anybody’s mind that the person on the other side couldn’t do anything to stop Damion Miller,” Holmes said.

Miller spent the balance of the school year running with the John Tyler track team. He was part of a 1,600-relay team and ran the 100 meters at the Texas Relays in April.

All Miller could do was look around and soak up the atmosphere. Felt like home, he said.

“You can put this in your paper,” Holmes said. “Damion is going to be a totally different player at the University of Texas than he was at John Tyler High School. You are going to see him do things that you knew he could do at John Tyler, but you didn’t see it.

Editor’s note: This is the sixth of a series of looks at Texas’ 2017 signing class, as we reach out to the recruits themselves across Texas, Oklahoma and Florida to get a sense of just what the Longhorns are getting. Past stories:

A Fab 55 profile: Keondre Coburn is a familiar face for the Texas coaching staff